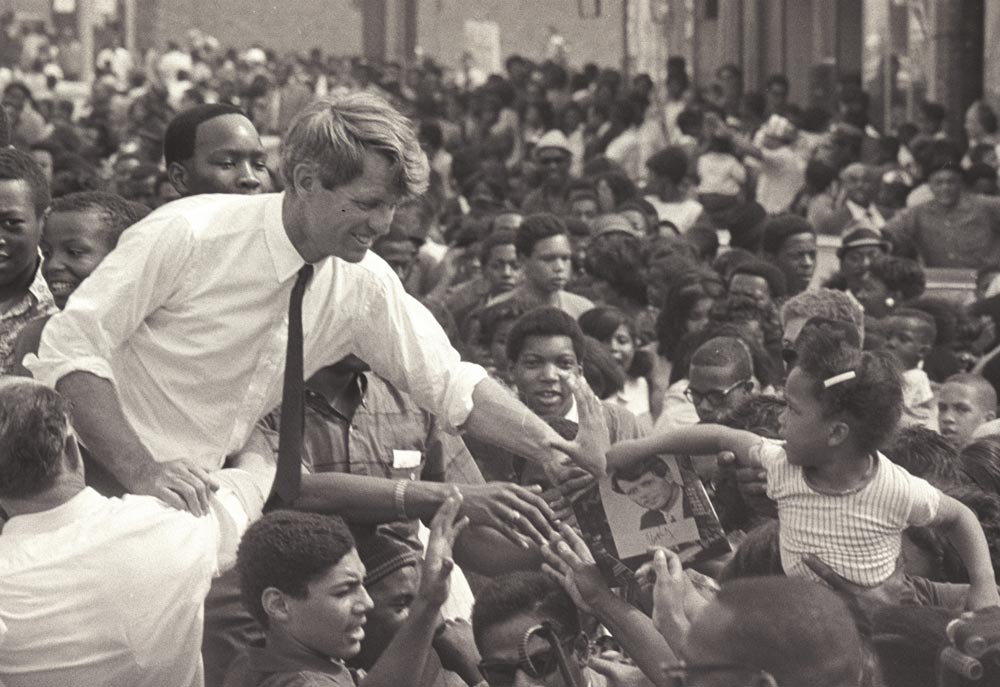 American senator Robert F. Kennedy (1925 - 1968) stands in an open-top convertible and shakes hands with members of a crowd as he campaigns for the democratic Presidential nomination in Detroit, Michigan, May 15, 1968. (Photo by Andrew Sacks/Getty Images)

Today people from all over the world will gather at Arlington National Cemetery to stand at the grave of Robert F. Kennedy who was assassinated 50 years ago.

With the rest of us, they’ll remember and honour a man who could have made America better. And mourn not only his loss but also the loss of what he stood for — a unified, compassionate America where people of privilege raised the downtrodden and people who were marginalized were given a voice.

Above all, today’s anniversary of the day RFK’s life was cut short following the California primary prompts us to recognize what America has become 50 years later.

While Kennedy spoke of lifting up his country, striving for an Eden of empathy and equality, Trump has brought it down to the gutter. And made it a hell for some.

What would Kennedy have made of an America that tears a toddler from the embrace of her mother and keeps them separated, without the mother even knowing about her child’s whereabouts, as happens when refugees attempt to cross into the U.S.?

What would he have made of an unstable, borderline illiterate president who places himself above the law, talks about grabbing women’s genitals, provokes allies, attacks the Justice Department, enriches the wealthy and may be under investigation for collusion with the Russians?

While RFK’s elegant speeches inspired Americans to be better, to do better, to be responsible for one another, to care, Trump utters coarse nonsense.

Famously, Kennedy’s speech in Indianapolis the night Martin Luther King was assassinated defused the tension and anger so much that it was one of the cities where there was no riot that night.

Trump, on the other hand, plays to the mob and invites anger.

In Trump’s America, wealth and money and winning are the only things that matter.

Kennedy had the totally opposite view of what was important in America.

“Too much and for too long, we seemed to have surrendered personal excellence and community values in the mere accumulation of material things,” he said, speaking at the University of Kansas weeks before he was murdered.

He talked about how the Gross National Product “counts air pollution and cigarette advertising, and ambulances to clear our highways of carnage. It counts special locks for our doors and the jails for the people who break them.

“It counts the destruction of the redwood and the loss of our natural wonder in chaotic sprawl. It counts nuclear warheads and armoured cars for the police to fight the riots in our cities…Yet the gross national product does not allow for the health of our children, the quality of their education or the joy of their play. It does not include the beauty of our poetry or the strength of our marriages, the intelligence of our public debate or the integrity of our public officials.

‘“The intelligence of our public debate” no longer exists. Public debate in America is a cesspool of idiotic tweets and social media invective.

“The integrity of our public officials” is a joke.

What is especially sad today, because it’s the anniversary of RFK’s death, is that it could have been possible to make America great.