Does Hating Winter Really Make You a Bad Canadian? 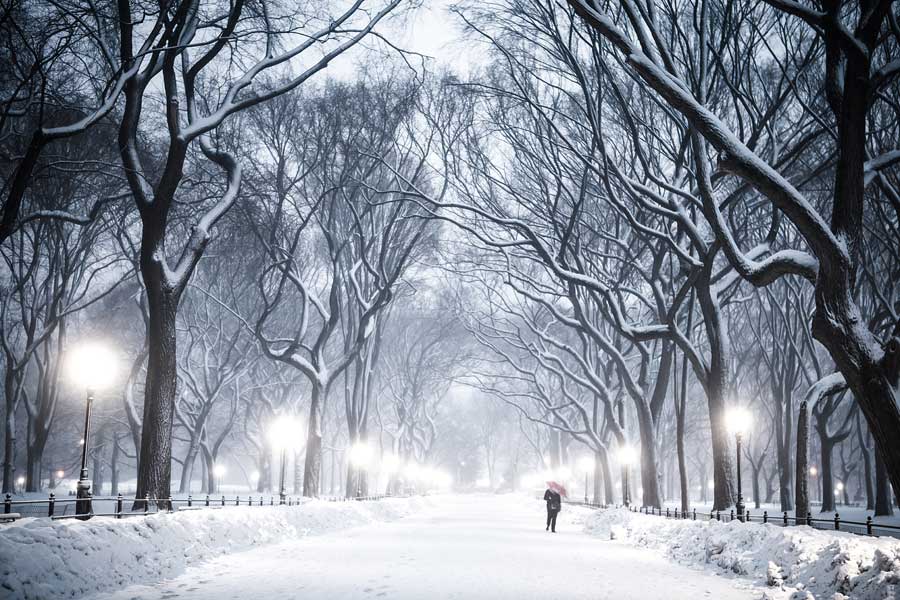 This Friday is not just your fourth-last shopping day until Christmas. It’s the Winter Solstice, a.k.a., the first day of winter, a designation that might be lost on Cambridge Bay, Nunavut residents, who were still enjoying fall last week when a three-day blizzard left them with four-metre-high snow drifts.

I suppose it’s a special day of its own for Canadians — a deep-seated one, and depending on where you live, not necessarily a cause for celebration (other than the fact that the hours of daylight will now increase, and eventually it won’t be dark when you go to work or leave it).

Apropos of all that, in the same way people recall their first childhood memory, I have an earliest dream I remember from my childhood in Winnipeg. It was of snow melting.

In my dream, it rained, and the snowbanks were dissolving like sugar. Within minutes the sun was out (what can I tell you, it’s the Prairies, it was a dry rain). Everything was suddenly green, and the other kids and I were running around the streets like happily escaped convicts.

Then I woke up, looked out the window, and dispiritingly the “winter wonderland” was still there. The winter had been a particularly harsh one, and a recent storm had piled drifts over my head. Hard enough for adults, I suppose, but harder still for children whose sense of time is so in-the-moment clocks can seem to go backwards.

I believe that was also the winter I froze my tongue to a sub-zero metal door handle (yeah, just like Flick in the movie A Christmas Story), leaving “ath pathch of thkin” behind.

“But you’re from Winnipeg!” I’ve heard all my life. “Winter should be easy for you.” First clue: I didn’t stay in Winnipeg.

But all Canadians own their own version of winter (even Vancouverites, whose bragging about their mild weather occasionally comes home to roost when they get a half inch of snow and Armageddon is declared).

I grew up where winter meant you were practically living on the moon (in fact, Winnipeg weather reporters tend to keep an eye on the temperatures on Mars so they can declare “today, it was warmer on the Red Planet than it was in Manitoba”)

I now live in Toronto, which is usually hovering around freezing. This means winter is whatever combination of rain, snow and freezing-rain the indecisive elements decide to throw at you on a given day. This is often capped by an exhausting scraping session on the inch-thick layer of glassy ice on your windshield, a dig reminiscent of the search for Tutankhamen’s tomb (that’s assuming a giant ice-laden tree branch hasn’t fallen on your car, taking it out of commission completely).

I suppose all this makes me a bad Canadian. I don’t ski, and my skating ability never rose above my ankles. But there are a lot of us out there, putting up with winter as the price we pay for the fun we have during every season that’s not winter.

I think of the comedian Ron James, whose observations on the country, written while playing road gigs, should qualify him to be our poet laureate. (“… travelling from Kamloops to Prince Rupert on the Caribou Highway, stuck in a whiteout with rigs plowing out of the snow with the force of a Biblical prophecy …”).

Given all that, it’s amusing to find people whose absolute unfamiliarity with winter makes the idea of snow fascinating to them. An Australian sketch duo I befriended while covering comedy used to keep track of Canadian weather reports and would I/M me from Melbourne when they’d read about a snowfall, asking me to describe it.

I once told that story to Hugh Jackman, who moved his family from L.A. to New York after bringing them over from Down Under. “I totally get that. I am one of those people. Actually, most Aussies are,” he said. “When it’s snowing outside, I look out the window and I can’t stop looking at it.” During a January blizzard in New York a few years ago, he was one of the few people on the streets, taking selfies with fellow winter lovers as he walked his dogs.

The irony of our changing weather patterns is that our winters may become more unpleasant. “Where’s your global warming now? Ha, ha!,” goes the predictable grunt whenever winter asserts itself. A freakish storm in Nunavut aside, it’s warming up above the Arctic Circle, where they’re subdividing future beachfront properties. Meanwhile, the weakening of the polar vortex that has always kept the world’s coldest temperatures at the poles, appears to be affecting the continental climate, making for worse winters and bad jokes.

But however this winter turns out, if you complain about the heat come July, I will be the first person to shut you down.