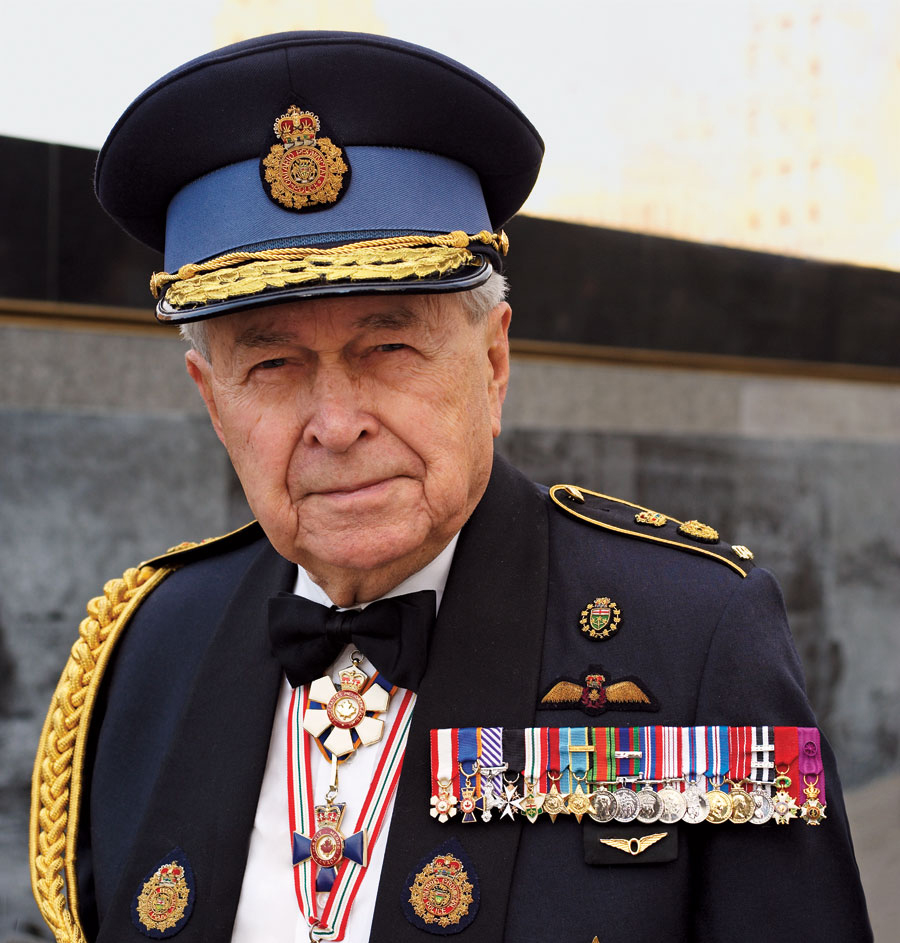 Born in Hamilton, Ont., in 1924, Rohmer joined the Royal Canadian Air Force in 1942, flying in 135 missions, earning numerous plaudits and decorations for his role in D-Day and the battles of Normandy, Belgium and Holland. A lawyer of aviation and commercial litigation (he still practices) author, historian, raconteur and friend of the Royal Family, Rohmer is one of the most highly decorated Canadians ever, having been awarded the Order of Canada, Order of Ontario, Order of Military Merit, Distinguished Flying Cross and the Canadian Forces Decoration, the Order of Saint John, Order of Leopold (Belgium) and Legion of Honour (France). On being introduced to Prince Phillip, the Duke wryly observed, “You’ve got more medals than I have!”

Never one to sit still, the Major-Gen is also still a licensed pilot. Now living in Collingwood, Ont., with his wife Mary-O, Rohmer shared his vision of aging with Zoomer magazine when he was named to Canada’s “Top 45 over 45” list for 2011: “These are the most creative years. It is vitally important to maximize opportunities. It also means that you have to be prepared to take chances.” Here we throwback to an article that originally appeared in Zoomer magazine, March 2009.

Richard Rohmer on air force pride: My licence plate reads M GEN. It’s a veteran’s plate with the big poppy on it, Air Force wings and an Ontario Provincial Police (OPP) crest. I don’t want anyone to think I’m an army general.

On being a writer: Exodus UK, a novel I wrote in 1975, is a fictional look at what would happen if the economy of the United Kingdom collapsed. I scarcely remember writing it, but it’s almost a reflection of what is happening to economies everywhere. I’m also working on a book relating to the 15 Canadian fighter squadrons at the battle of Normandy.

On being a pilot: I’m probably the oldest licensed pilot in Canada. I always have another pilot in the right-hand seat — not that I need anyone — it’s just to be prudent. I really enjoy the flying.

On honours: I’m the most highly decorated citizen in the country. It takes me 20 minutes to put the medals and decorations on.

On the golden years: When I was 45 to 60, I had several careers going. These are the most creative years. It is vitally important to maximize opportunities. It also means that you have to be prepared to take chances.  —Jayne MacAulay