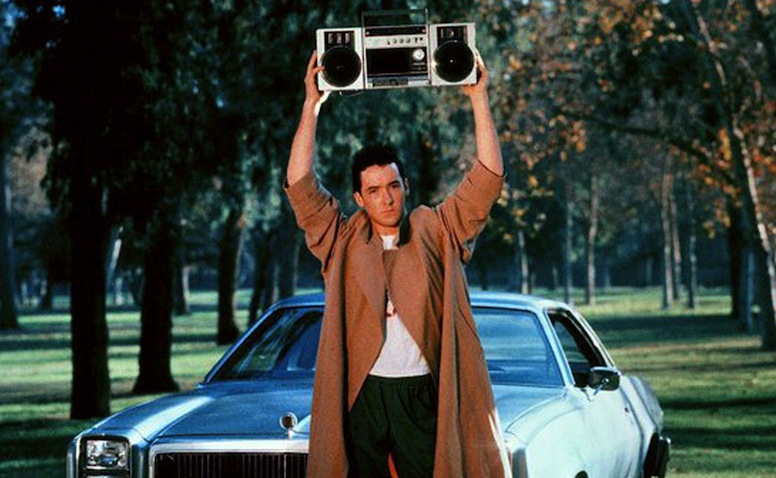 Photo: Movie still from say anything

My now wife and I had lived together for a few years in the ‘80s and even bought a house together—married common-law by legal definition (“living in sin” by our parents’). But we were thinking of having kids, and “common” just didn’t seem an appropriate description of our relationship.

I decided to do it right, and made a Valentine’s Day reservation well in advance at an intimate downtown restaurant, ring and everything. And then, on the day, I got sick—like pandemic flu sick. I was flat on my back, and I was depressed. Bianca couldn’t understand why I was so upset about cancelling a reservation.
A week later, with me off my death bed, we did a do-over. We were the only people in the restaurant, doted on by the staff, and the moment was ours.
By contrast, I imagine the proposal in a packed resto on Valentine’s Day would have gone like this:

Thus, was born our tradition of Valentine’s dinners on Feb. 15. We are nothing if not practical romantics. Go when they ain’t. It’s much more private that way.

Now here’s St. Valentine’s story. There were actually three canonized saints named Valentine, but only one was a priest of Rome who was martyred and beheaded on February 14, 269 near what is now the Piazza del Popolo. It’s a romantic story already, no?

Valentine’s crime was proselytising Christianity. As the story is told, he actually converted his first judge, Asterius, by curing the judge’s daughter Julia of blindness. However, a later audience with the emperor, Claudius II, went South and Valentine’s fate was sealed.

The romantic part, which is considered even more apocryphal than the rest of the story, has Valentine being enamored of the girl he’d cured, and sending Julia a note from, “Your Valentine” on the day of his death.

This may sound like unethical behaviour by a priest, particularly one who will be meeting his Maker presently. But it would be nearly a thousand years before the Church would require priests to be celibate and to renounce the pleasures of the flesh.

It’s also a very Hollywood story, in that it’s a romance that only exists in the moment. It’s easy to declare your undying love when you’re about to, well, die. It’s hanging around that’s hard. Who knows? Maybe Julia snored. Perhaps, after having grown up in a high-ranking jurist’s household, she’d eventually grow disillusioned with the lifestyle that could be afforded by a priest in a technically illegal religion. Maybe she just didn’t like Valentine “that way.”

In Hollywood, as in Rome, death seems to be the only way to keep idealized relationships happy-ever-after. Sitcoms from the ‘60s to the ‘80s were predicated on the hilarity of single dads raising kids (The Andy Griffith Show, My Three Sons, The Courtship of Eddie’s Father, Full House, The Nanny). But divorce would never fly as the reason for their marriages having ended. They were always widowers. That many dead moms seemed suspicious to me then, and still does.

But half of all marriages fail, and by extension, at least half of all serious relationships do too. You wouldn’t know it by watching a typical romantic comedy, though. They meet cute, initially dislike each other, reluctantly find themselves attracted to each other, find some reason not to get together, and then fall into each other’s arms after an act of dramatic theatre (the best being John Cusack playing Peter Gabriel’s “In Your Eyes” on a boom-box, like Romeo under Juliet’s balcony, all to woo Ione Skye in Say Anything).

But what’s really depicted is that sort of moment in a rom-com relationship when you can’t see past the flames. Dude, you just raced to the airport and busted past airport security to plead with Kathryn Heigl to not get on that plane. You’re not acting like a sane person. You were lucky they didn’t shoot you. I give it a year.

Realistic love stories are rare, especially involving people old enough to know why the ancient Greeks had as many as eight different words for love.

It’s why I loved 500 Days of Summer, with Joseph Gordon-Levitt and Zoey Deschanel. Its message was that people can have sparks together and still not belong together. People were heartbroken that a similar fate met Emma Stone and Ryan Gosling in La La Land. But think about it. He couldn’t both devote his life to her and continue to teach the true meaning of jazz to people like John Legend.

But for a romance that speaks to people old enough to know better, I point you to bank robber Robert Redford and struggling farmer Sissy Spacek in last year’s The Old Man and The Gun (a movie whose charms were lost amid all the noise about it ostensibly being Redford’s last role). The flirting in the diner between the two is knowing and confident. There are things they choose not to know about each other, but there are no crossed signals. It is sweet and it simmers.

And yeah, there’s still not exactly a happy ending, but I prefer those happen in real life. Why should people onscreen have all the fun?