Fellowship of the Sea: A Bond Forged by the Ocean 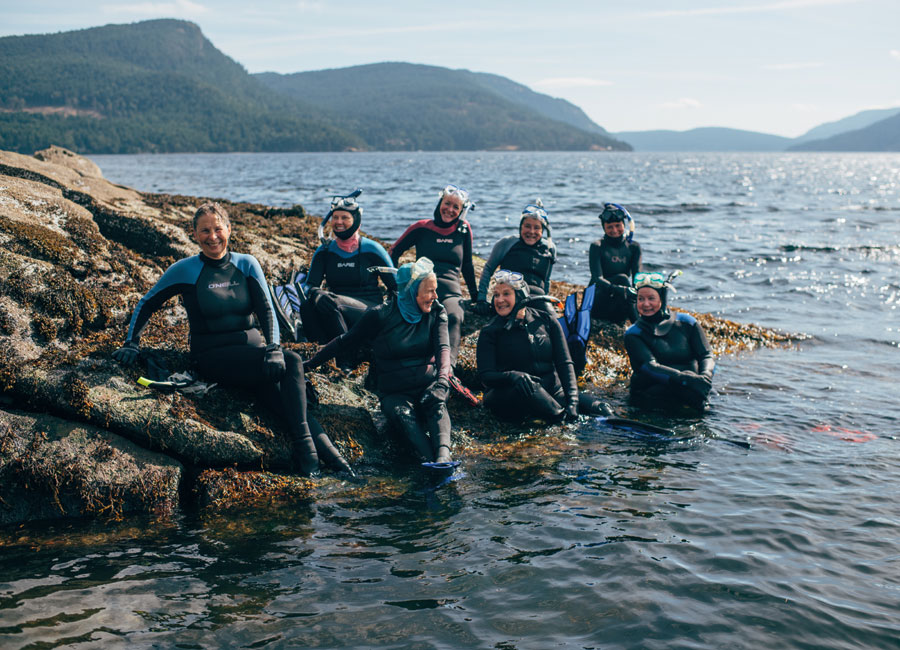 Off the coast of B.C., a camaraderie is born of a common love of salt-water swimming.

A group strolls down a winding road on Salt Spring in the Gulf Islands of British Columbia. You could easily mistake them for a troop of retirees heading home to play a regular card game. There are shocks of white hair and mature faces. Colourful clothing and confident strides. But you’d be wrong to assume that this group is planning anything that involves sitting or leisure, as this agile band of older women turns down a steep set of stairs in excited conversation and heads toward the sea.

Helping each other they slip comfortably into black rubber body suits, masks and snorkels, sharing a laugh or two as only good friends can while pushing and pulling on Velcro and tight zippers. Surrounded by a rough scrabble of jutting rock, tall grass and gnarly oak trees, they effortlessly transform from land mammals to a pod of ocean-going sea life. Free at last. This is seal country. The Salt Spring Seals, as they are known, gather to swim here in the Salish Sea a few times a week year-round, as they have since Diana Hayes began as Seal No. 1 in 2002. Water temperatures average nine degrees all year, and it’s never easy getting into the dark, cold water, but together they feel like they can do anything.

“Swimming is not something we do,” Elly Silverman says. “It’s who we are.” The retired professor of women’s studies has been swimming with the group from the beginning and sees it as a definition more than a pastime. Salt Spring Island is an eclectic community, home to many artists and musicians. To find this group on one of their hour-long swims splashing along the coastline is not a surprise for anyone here. Unique is the norm here.

“Every time we get in the water, the light, the plant life and the rocky mysterious landscape under the sea is what thrills us,” says artist Chris Hunter. “Each and every time out is a one-of-a-kind experience.”

The Seals swim on sunny days. They swim in the rain. They swim with plummeting temperatures and snow on the ground. And when it feels right, they swim under a full moon on a warm summer night when the phosphorescence all around them puts humanity into perspective. “When we swim, we are only interested in the moment,” Hunter says. And these Seals truly are having their moment often.

Hayes will never forget one particularly icy swim. She writes about it as part of her work as a poet. “It was bracing, but we felt so alive. Our fears drift by in their tiny canoes, waving us on now, under the influence of the sea.” “I started swimming with the Seals after a running injury in 2003. I don’t like pools, and Salt Spring Island only had a small above-ground one at the time. So when my doctor suggested the ocean, I was game. I also scuba dive, so the equipment was familiar. I swim because I love the quiet solitude of the water, the companionship of the women and the ever-changing tableau of the sea life. Once I was face to face with a female sea lion that held a salmon carcass. And on another swim, a cormorant dove in the water and went right underneath me. Perhaps my favourite experience was watching an octopus hunt in the rocks below me.” “I have always loved the water. As a child in New England, my family went to the beach. I put down my blanket and raced into the Atlantic where I stayed all day. Two years after moving to Salt Spring Island, the Seals asked me to join. Swim in winter? What an odd concept. The Pacific is cold, the sky grey. Then, it hit me: I live on an island and I don’t swim. So I joined them, with trepidation, in mid-January. Fourteen ocean years ago, that was. Here I am now, hair still wet and face still salty. I am thrilled every time I swim. It may be the light, silvery and grey, or bronze and green. It may be the cold, which finally seems, well, warm enough. It may be the beauty under the ocean, which nobody knows except those of us who become part of it, through our eyes and our bodies. It may be the friendship among us, affirming our courage each time we swim.” “From my first swim with the Seals, I was hooked. The joy of being part of an environment so alien to our usual terrestrial one is hard to describe. After I slip into the water at the start of each swim, it takes a few strokes to adjust, and then I am captivated by the beauty, the uniqueness and the privilege that being part of the underwater world the Salish Sea provides. After a few minutes, I often feel such a oneness with the ocean environment that I think I could abandon my snorkel and breathe like a marine creature. (Fortunately, I’ve never succumbed to this fantasy.) Every swim is different, and the sea provides an unending variety of life forms. There is something exhilarating about timing each stroke to the rhythm of the waves, or swimming with the changing tide so that a single stroke makes you feel like an Olympic athlete. My most spectacular memories are composite experiences like the feelings I’ve tried to describe, of watching a large crab catch and eat a fish, of seeing the amazing indigo blue colours of the kelp shimmering in the afternoon sun. And then, on the rocks at the end of every swim, the fellowship of the Seals on the rocks after the swim, sharing highlights of the swim and appreciating the wisdom and diversity of the group.” “Being a Seal rekindles and recaptures my youth – that sense of freedom from summers spent swimming in a lake at our cottage. Swimming year-round in the ocean is pure bliss – I step into an underwater world that calms my mind, while making me feel alive and in tune with nature and myself. One of my favourite swims was on a clear day when we swam through a kelp forest illuminated by shafts of light. It was like swimming through a perennial garden. This forest provided shelter for tiny crabs, who wrapped their legs around the bull kelp, swaying with the current. Swimming can be a solitary venture, so I enjoy the comaraderie among the Seals – we support each other in the water and on land.” “Swimming with the Seals brings me a tremendous amount of joy. I have always been an open-water swimmer. After leaving and returning here to Salt Spring, I needed a way to get back into the ocean again. I joined the Seals and am so happy with this inclusive and supportive group. I love seeing the wildlife, the beautiful plants and animals found under the surface. A very special moment happened to me when I encountered a wild seal during a recent swim. We looked at each other above the surface of the water as we got closer and closer. It felt outside of space and time. Two sea mammals silently meeting one another.”

A version of this article appeared in the April 2018 issue with the headline, “Fellowship Of The Sea,” p. 78.