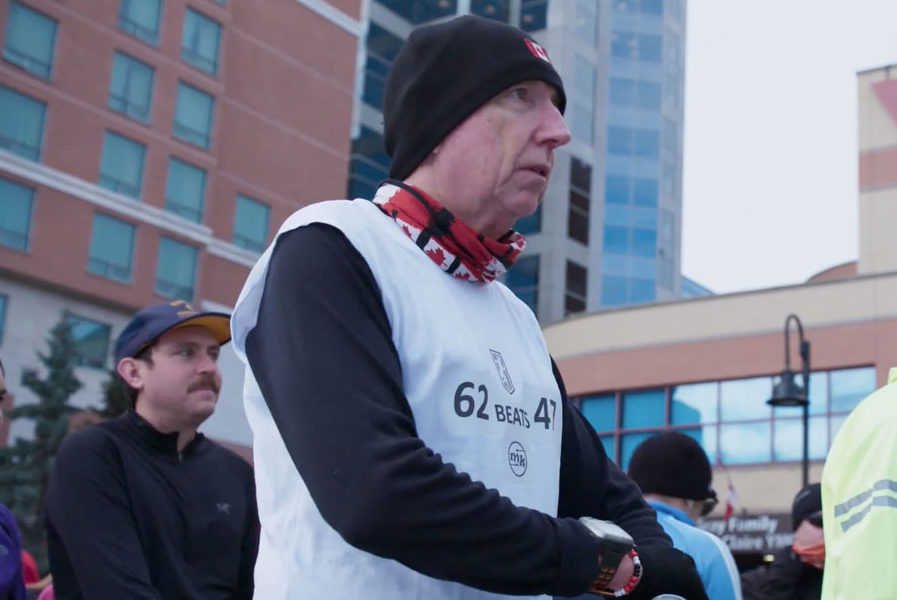 Martin Parnell on the starting line of the half marathon race in Calgary, where the runner fought through frigid conditions and ice in an attempt to beat his personal best from 15 years prior. Photo: The Ageless Athlete/Dominique Keller

For endurance runner Martin Parnell, his next time to beat is always top of mind.

Even after a stroke in November, which left him unable to speak for more than a week, the 64-year-old, Calgary-area athlete plans to run the 2020 Boston Marathon in April, and expects to qualify for 2021 as well.

Where most people might be discouraged or even depressed by a medical setback as momentous as a stroke, Parnell deals with it by putting it in perspective.

At his age, “it’s not if something is going to happen, it’s when, and the only question is how do we move on? For me exercise has filled that role,” Parnell says in a phone interview from his home in Cochrane, Alta., about 20 km west of Calgary.

His new qualifying time of 4:05 for the 65-69 age group is 15 minutes more than what he needed to qualify in the 60-64 age group. With his recovery from the stroke taking up valuable training time, Parnell is thankful for the extra 15 minutes.

“That’s the beauty of getting old,” Parnell says.

Running has been therapeutic since Parnell started putting sneakers to pavement in his 40s. After struggling with the death of his wife in 2001, his brother challenged him to run a marathon. Although he wasn’t a runner, he found solace in it.

“I just said yes, even though I didn’t run and I found I enjoyed it,” he says. “It got me into the world and gave me focus at a very difficult time.”

Most of Parnell’s challenges have been self-inflicted. Over the years he’s set four Guinness World Records in endurance events — including one for participating in a 24-hour lacrosse game — while his accomplishments outside the record books include 250 marathons in one year, a gruelling 25-day, 1, 014 Kilometre run along the coast of England and climbing Mount Kilimanjaro in 21 hours.

“I think when you’re younger, you almost take challenges up as they come along, but as you get older, you have to be mindful of doing it,” he says.

Recently, the runner’s propensity for setting ambitious goals was the subject of Calgary filmmaker Dominique Keller’s  The Ageless Athlete, a documentary short that follows Parnell, then 62, as he attempts to beat his personal best times in the 5K, 10K, half marathon and full marathon he set when he was 47 — a challenge he confidently called “62 beats 47.”

Watch the trailer for The Ageless Athlete below

Malcolm Kent, the personal trainer who readied him for the races, wasn’t surprised when Parnell approached him with the idea.

“I kind of knew enough about Martin to know that he did set these kind of crazy challenges,” Kent says. “Coming from him, this is pretty normal.”

Although success has often come on the heels of these challenges, Parnell says achieving the goal isn’t necessarily all that important. In the case of the “62 beats 47” challenge, it was about finding new motivation.

“I just felt I needed something to shake my running up,” he says. “So I thought, why not just take it on and just see what I can do.”

“Trust me, I was full on,” Parnell says. “I didn’t actually set personal best, but [my times] were all way faster than I had run for a number of years. So those are the wins.”

Key to those wins, Kent explains, is Parnell’s flexibility, which he witnessed first hand as the runner was faced with a number of setbacks during his training, including an ankle injury before he even set foot on a course.

“I was really surprised by just how he was able to adapt his mindset ,” Kent says. “He has this philosophy whereby he can adapt on the fly. Then he’d get genuinely energized about the new plan. ”

It’s something Parnell employs often. After falling short in each race against the times he set at 47, the runner quickly set a new time to beat, which is leading him to his fourth Boston Marathon and his first since 2010.

“I think what you have to learn is not to take these results personally,” he says. “If I’ve been successful, great, but if I haven’t, the only question is am I going to try it again? If no, is there something else I’m going to do?”

In Parnell’s case, that question is rhetorical.

81-Year-Old Runner Says ‘The Best Is Yet To Come’