Keeping the Faith: How Do Christians Celebrate Easter When the Church Doors Are Locked? 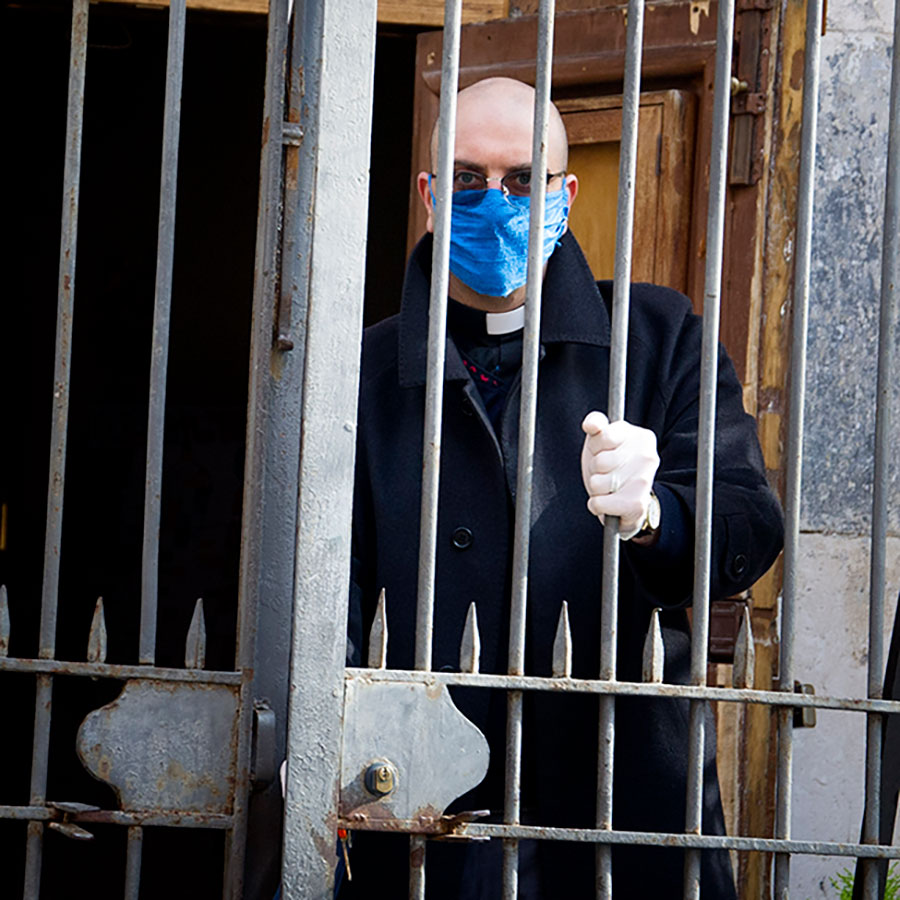 A priest locks the doors of Santa Margherita di Maddaloni church in Italy due to the COVID-19 emergency restrictions. Photo: Vincenzo Izzo/LightRocket via Getty Images

This Easter Sunday, televangelist Joel Osteen will host a virtual service along with Kanye West, Mariah Carey and Tyler Perry, a star-studded collection of celebrity Christians to celebrate the most important day on the church calendar.

A more unlikely quartet of paschal proselytizers you could not possibly assemble.

But in a strange way, this gathering truly befits the bizarre COVID-19 era Christians are living through, when churches are locked tight and the only way God-fearing Christians can find the spiritual solace they need in these turbulent times is through online and televised broadcasts (some airing on VisionTV) of liturgies, services, sermons and prayer meetings.

While most churches are scrupulously adhering to the public health social distancing rules and aren’t allowing public gatherings, others have sought inventive ways to remain operative. In the U.S., several churches are offering services in parking lots, with congregants pulling up in their cars to take in the Word of God as if they were at a drive-in movie.

And others have simply flouted the law and continued to hold services, like Pastor Rodney Howard-Browne of Tampa Bay, Fla., who was arrested for violating the city’s stay-at-home ordinance. The pastor defended his decision, saying that he was providing an “essential service” to his faith community. Pastor Howard-Browne, it seems, received some divine intervention. One day after being arrested, Florida Governor Ron DeSantis updated the list of essential services in his state to include: “religious services conducted in churches, synagogues and houses of worship.”

Howard-Browne, as well as some of the more fiery southern evangelical preachers, see the outbreak as an apocalyptic sign from the heavens. Pastor Rick Wiles told followers on his TruNews podcast, “The Death Angel may be moving right now across the planet” and is about to “purge a lot of sin off of this planet.”

“They’re telling bold-faced lies,” says Kirk Cowman, lead pastor of Living Hope Alliance Church in Regina. “The defining characteristic of God is love. Why would he do this?”

“It’s balderdash,” agrees the Very Reverend M. Ansley Tucker, dean of Christ Church (Anglican) Cathedral in Victoria, on whether COVID-19 is a divine retribution. “Viruses have no moral capacity.”

“Yes, bad things happen,” she continues. “But the role of faith is to help people deal with these bad things with grace. The question is what do we learn from it and what good can it lead us to do?”

Where it has led Tucker, Cowman and many other faith leaders across Canada is to come to terms with life in the era of COVID-19 and to rethink on the fly how their churches can continue to fulfil their spiritual mission in an era where people aren’t allowed to congregate in large numbers. For many, it’s the first time in their lives that they aren’t going to Sunday morning service.

This has left many people “bewildered and wondering how to continue to live our faith,” says Fr. Dominic Barber of St. Patrick’s (Roman Catholic) Church in Markham, Ont., which usually draws 6,000 people for Easter services. He, too, has resorted to reaching out through video prayer conferences and live-streamed liturgies. “Although we can’t physically be present at the Mass, there’s still a spiritual community and oneness that we feel with God,” he says.

But the practical services, the ones that can’t be carried out online – like baptisms, communions, weddings and visiting the sick – have been greatly curtailed. Fr. Barber still manages to hear confessions in the church parking lot, standing six feet from the penitent who sits in his car. And, of course, he must perform funerals, though not inside his church and with a greatly reduced number of mourners present. On Thursday, he was set to preside over the burial of a parishioner – only three family members were allowed to attend.

Dean Tucker’s parish, like others, runs pre-recorded services online and hosts community and prayer gatherings through video conferencing platforms. Her members, many from the older demographic, were leery at first but have slowly adapted, even creating an online “happy hour” – which she laughingly describes as “so very Anglican.”

For Pastor Cowman, who has several people in his community afflicted by COVID-19, the shift to live online services has been almost seamless. He has been doing it for years now and happily reports that some of his older members are adapting to Zoom prayer services better than their millennial counterparts. “It gives people a sense of connectedness that they’re missing from the Sunday gatherings,” he says.

Cowman sees this moment of crisis as a turning point for his own church and indeed many others. “The church has to pivot at this point in history,” he says, borrowing jargon common in the IT world, where he worked before becoming a clergyman. Rather than having large gatherings on Sunday morning, he foresees churches operating in smaller “circles” – where social isolation can be practised – but still united to the larger community by technology.

And Cowman thinks church leaders must simplify the presentation of the service – “change the experience” – in order to make it more appealing, especially to younger people who spend much of their lives online. Down the road, he foresees a regular online Sunday service packaged in tighter segments – almost like a TV talk show – with better production values, less music and shorter sermons. “For our younger clergy and churches that are willing to take risks to change what they’re doing, there’s incredible opportunity,” he says.

While that may work for some smaller congregations, Fr. Barber says the Sunday Eucharist cannot be replaced by online service. “It’s a different spiritual expression than attending Mass in person,” he says. And he worries that a long-term shutdown of churches will result in a drop-off in attendance. “The rhythm of our faith is going to Mass on Sundays,” he says. “If you break that for three months, it’s going to have an effect on church attendance.”

Cowman agrees and expects to see a big drop-off in marginal Christians. However, he feels others will turn to the faith, seeking spiritual comfort in difficult times.

Silver linings in a bleak world

Dean Tucker isn’t sure what effect it will have but sees rays of sunshine amidst the dark clouds. At her church’s online gatherings, she noticed a real sense of community developing. “People are coming out of their cliques and having conversations with people they’ve never spoken to before,” she says. “I’ve had more fun at this week’s online coffee hour than I’ve had in ages.”

Fr. Barber has also seen COVID-19 spark a “tremendous groundswell of the best part of humanity.” St. Patrick’s website has an online donation portal to help support the online food bank for the local community, and people have come forward to offer to shop for those who can’t get out.

During times like these, “You try to make silk purses out of sows ears,” agrees Tucker. But it’s not always easy. Yesterday, she held an online chapel service with 90 kids, which she described as “ an unmitigated disaster. Trying to get 90 six-year-olds to say ‘Hallelujah’ at the same time online was a challenge.”

But providing a spiritual anchor for Christians has never been an easy job, and Dean Tucker, Pastor Cowman and Fr. Barber knew what they were getting into when they answered the call.

And this Easter season, amidst all the sickness, death and hopelessness that abounds throughout the world and empty churches and scattered believers, they’re focusing on one goal. “We have to keep the work of the church going,” says Tucker.

To which faithful Christians across the land will undoubtedly respond: “Amen.”