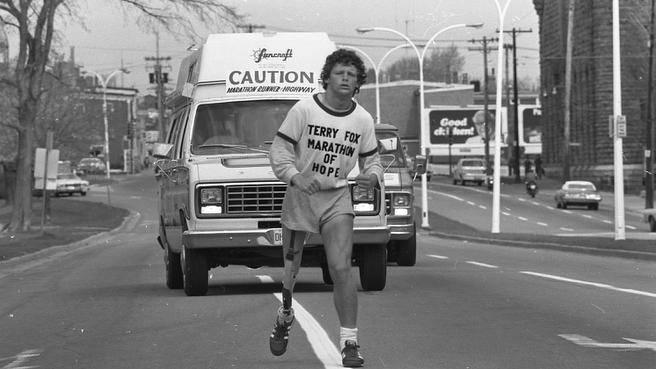 With the annual Terry Fox run celebrating its 40th year, we look back on the first Marathon of Hope that started it all.

“People thought I was going through hell. Maybe I was partly, but still I was doing what I wanted and a dream was coming true and that, above everything else, made it all worthwhile to me. Even though it was so difficult, there was not another thing in the world I would have rather been doing.” – Terry Fox, The Toronto Star

Saturday, April 12, 1980, marked the start of the Terry Fox Marathon of Hope — not simply the inaugural run, conceived by one of Canada’s youngest, bravest heroes but now an annual tradition of will, defiance and charity against a disease that afflicts over 200,000 Canadians a year.

Fox’s idea for the first Marathon of Hope was to begin with one foot in the Atlantic Ocean and conclude with the other in the Pacific. The run in between would cover some 8,000 kilometres – an overwhelming task for the most able-bodied of runners and a seemingly Herculean feat for a 22-year-old with one artificial leg. Fox completed more than 5,000 kilometres across six provinces in 141 days before cancer in his lungs forced him to abandon the run.

The first Marathon of Hope saw celebrities, politicians and flocks of adoring Canadians greet Fox at every stop on his route. Some ran alongside him. Many shouted messages of encouragement as he soldiered by, the excruciating pain of each step often etched on his face. People handed him donations on the side of the highway. Others organized fundraisers. The overall monetary goal for the run was to raise one dollar for every Canadian. At the time, Canada boasted 24 million people. Fox raised $24.17 million.

Since Fox’s first run in 1980, the annual Marathon of Hope in his honour has raised over $750 million for cancer research — a triumphant testament to the man who began the run not out of sympathy for his own suffering, but that of others.

“I don’t feel that this is unfair. That’s the thing about cancer. I’m not the only one, it happens all the time to people. I’m not special. This just intensifies what I did. It gives it more meaning. It’ll inspire more people. I just wish people would realize that anything’s possible if you try; dreams are made possible if you try,” Fox is quoted, regarding his run and struggle, on the Terry Fox Foundation website.

Perhaps more than money, more than even awareness to the deadly disease that took Fox’s life in 1981, Terry’s enduring gift to Canadians and the world is hope.

The Terry Fox Run will be held this year on Sunday, Sept. 20.