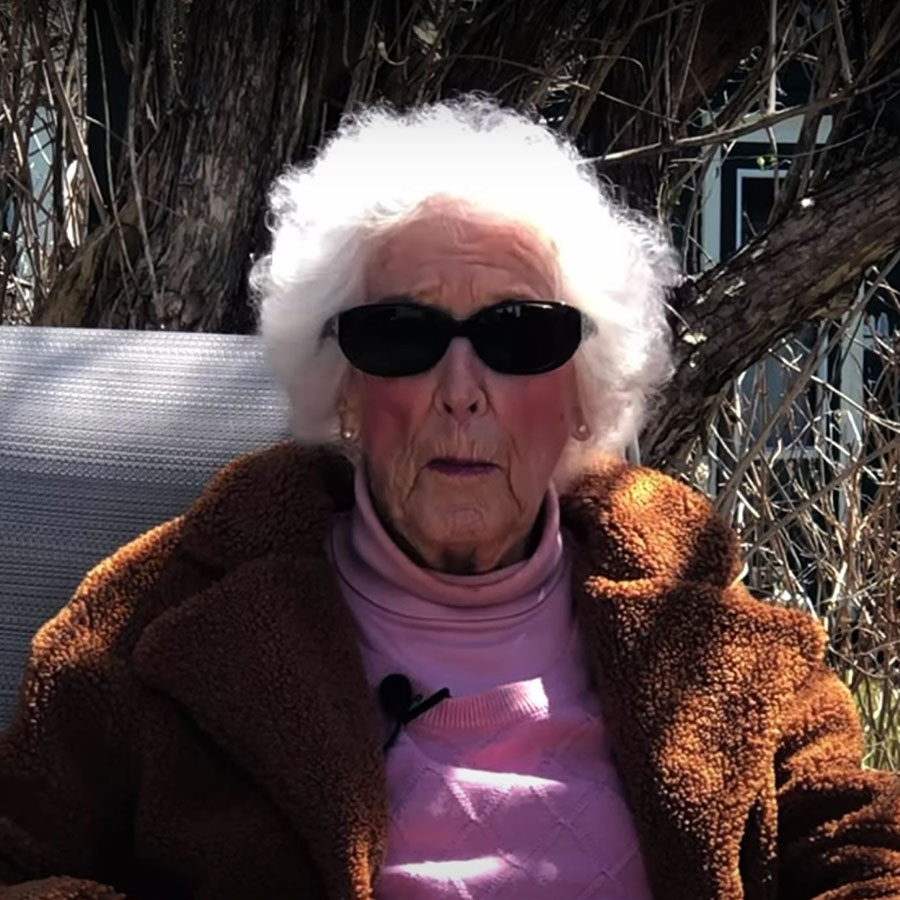 Joy Saunders is real card, which means she is wicked funny. Now the Second World War veteran is facing newfound fame with the same alacrity that got her to 101 and counting.

“I’m 101 and I still can’t die,” Saunders jokes in a video that her friend and podcaster Nancy Regan posted to Facebook on May 11. “I’m in the departure lounge, but the plane never comes in. So I’m waiting,” she says in a singsong voice. “I’m waiii-ting.”

Saunders has become a bit of a celebrity, much to her amusement, and has described all the attention as “hoopla.”

“I’m just the most normal person,” she says in the video on Regan’s podcast page, The Soul Booth. “In fact, nobody paid much attention to me until I got old. My claim to fame is old age.”

But the Lunenberg, N.S., centenarian is hardly sitting around and killing time. Every day she gets out her walking poles and spends 30 minutes tackling an 800-metre route with her cat, Toes, following behind. After watching a news story about 100-year-old English veteran Captain Tom Moore, who raised more than $55 million for the National Health Service by pushing his walker around his garden, she decided she should do it too.

“I said to my daughter, ‘You know, I could do that. I walk anyway, and I’m much older than he is.”

Saunders decided to raise funds for the Victorian Order of Nurses in Nova Scotia, a Canadian non-profit founded in 1897 in Queen Victoria’s name to provide home care and social services. The Nova Scotia organization just lost two colleagues in the horrific April 19 mass shootings when Truro nurse Heather O’Neill and Belmont continuing care worker Kristen Beaton were pulled over on the highway by a killer in a replica police car. And Saunders says its workers are on the front line of the pandemic, visiting clients despite, as Beaton publicized in one of her last social media posts, a lack of personal protective equipment.

“I can’t tell you how much I admire those nurses, LPNs and caregivers. I’ve had them a lot, and I also worked with them for 30 years (as a volunteer), running a foot clinic in Lunenberg,” Saunders says in the video, which has been viewed 116,000 times.

“They put their heart and soul in it. I can’t do much, I’m 101. But I thought I can walk. I walk every day and I have my walking poles to hold me up.”

She plans to walk her route 102 times before her birthday on Oct. 31 – “if I live that long,” she cracks – and has already raised almost $50,000. The total ground covered will be a little more than 80 kilometers; this week she had completed 17.

Born in England in 1918, Saunders survived the Spanish Flu epidemic, the Great Depression and the Second World War, where she was a lieutenant and commander of a platoon of the Canadian Women’s Army Corp. in Yorkshire. She celebrated VE Day 75 in Europe years ago.

The pandemic-induced hoarding of toilet paper and food reminded her of the way Canadians raced to the stores at the outbreak of the war, she told the Chronicle Herald’s John DeMont. But COVID-19 hasn’t changed her life so much. She lives in the same house she has been in for 35 years, with one of her daughters, who was visiting from Ontario when the lockdown began in March.

“This is exactly what the world needs right now,” Regan, a former news anchor, told CTV News. “I know Joy, I know her humour. I also believe that if you do something with a sense of pure purpose and passion, I believe magic happens.”

The VON created a video for Saunders, which features workers from across the province personally thanking her.

“Because of you, we’re able to bring food to folks across the province who need it, and take them to their essential appointments for their well-being,” said VON senior manager Derek Babin, who oversees the meals and transportation programs across Nova Scotia. “We walk in solidarity with you every single day.”