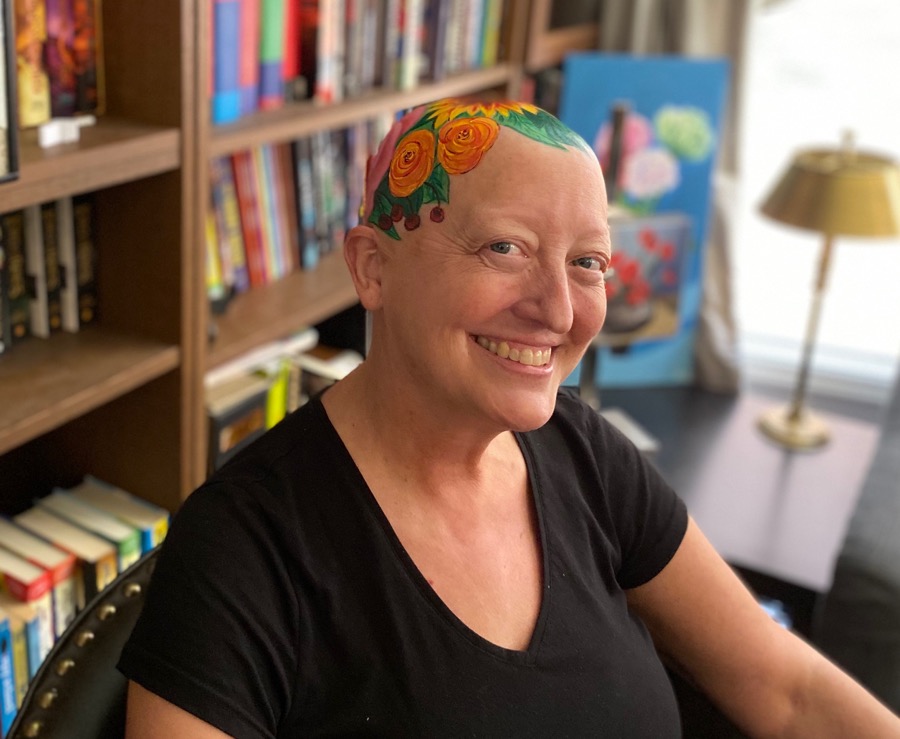 Lezli Kuntze says she hopes to pass on her unique way of coping with her chemo therapy to other cancer patients. Photo: Andrew Wright

Lezli Kuntze rarely walks by a mirror without doing a double take. Currently undergoing chemotherapy for her second bout with breast cancer, the 57-year-old is dealing with the side effect of hair loss by transforming her head into a beacon of support.

Every five to seven days, family and friends paint her head with a colourful design, each of which lifts her spirits and invokes a memory.

“I look in the mirror, and it makes me smile,” Kuntze told Zoomer  at her home in Thornhill, Ont. “Whoever has painted my head, I feel like I have them with me. Every one of them tells a different story of a moment in time with somebody.”

The 26 designs include several elaborate floral scenes, an under-the-sea theme and a peacock complete with sparkles.

The idea was conceived after her first diagnosis five years ago when she was trying to find a way to make her upcoming treatment easier on her two children, who were eight and nine at the time.

“We were going to do Crayola markers on mommy’s head on Friday nights and send pictures to the family,” Kuntze explains.

While the colouring sessions never took place after cancellation of her chemotherapy and a period of remission, the idea provided an important starting point when the cancer returned in a much more aggressive form in May of this year.

After some research, the markers were replaced with water-based makeup.

And, as originally planned, her children were the first to put brush to scalp, with a design to match a jersey Kuntze had worn during a cycling fundraiser in support of Toronto’s Hospital for Sick Children.

“They’ve been participating in it so it feels more comfortable for them,” she says. “And when we go out, they actually don’t mind when people stop and look because they know that it’s kind of cool, and they know that it makes me feel better.”

The idea, now fully realized, allows family and friends to provide support that extends beyond their time spent with her.

“Medically, I can’t do anything,” says Susan Ambrose, a musical theatre teacher and long-time friend who has contributed several paintings. “But being able to provide something that makes Lezli feel better is huge. I can see her mood lift when her head gets painted.”

That lift doesn’t always require a mirror either.

Kuntze says she’s far less self-conscious when she’s out in public with a fresh coat of paint.

She says those smiles often lead to conversations about her cancer that are “a little less threatening” and give her an opportunity to spread the word about how her project can help other cancer patients.

To that end, Kuntze has created the Healing Head Art Facebook page and website, where cancer and alopecia patients can learn about the project and share their own head paintings.

“What I’m really hoping is that other cancer patients take the brave step to try it,” she says. “There’s wigs, there’s scarves, there’s nothing, but this is just another way to help incorporate your support around you.

“The journey’s hard enough as it is, so anything that you can do to have that positive (impact) helps.”

This year, 26,900 women in Canada will learn they have breast cancer, according to Canadian Cancer Society estimates. It’s the most common type of cancer in women, but doesn’t skip men entirely. It’s estimated that more than 230 males will also be diagnosed with the disease.

A version of this story was originally published on Oct. 21, 2019

Breast Cancer: Foods to Help With the Fight

Foods to Eat (and to Avoid) to Lower Risk of Cancer