79 Years On, Remembering the Pearl Harbor Attack and the Treatment of Japanese Canadians in Its Aftermath 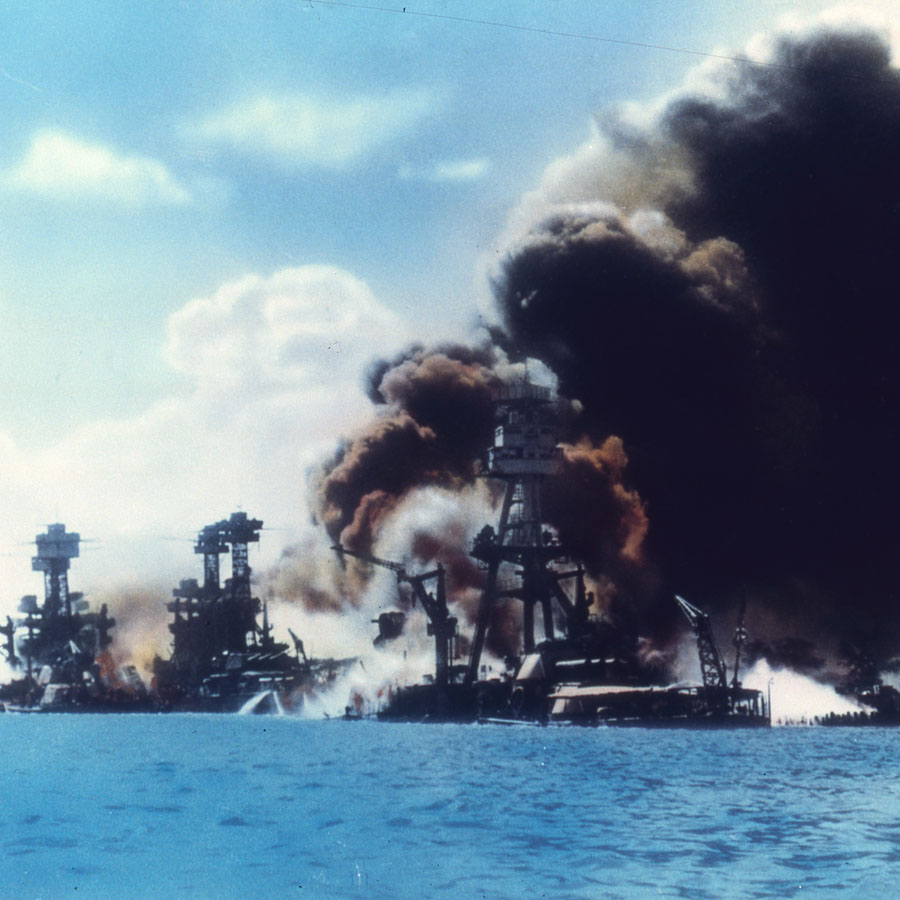 View of battleship row as explosions damage three American battleships during the Japanese attack on Pearl Harbor on December 7, 1941. From left to right, the USS West Virginia, the USS Tennessee, and the USS Arizona. Photo: US Navy/Interim Archives/Getty Images

The annual commemoration of the Second World War Pearl Harbor attack — which occurred on Dec. 7, 1941 — will take on a muted tone this year amidst the COVID-19 pandemic.

While 2020 marks the 79th anniversary of the Japanese bombing of the American naval base located in Honolulu, Hawaii, the ongoing pandemic is preventing survivors and veterans from attending in person.

American Navy veteran Mickey Ganitch, 90, who was stationed at Pearl Harbor and witnessed the early morning attack, told the Associated Press that he attends the ceremony every year to honour those who died. He accepts, though, that it’s not possible to be on site to pay his respects this year.

Meanwhile, in November, the Navy announced that a destroyer currently docked at Pearl Harbor experienced a COVID-19 outbreak, forcing crew to isolate.

Despite the pandemic, however, a scaled down private ceremony will take place at Pearl Harbor on Dec. 7, with the AP noting it will include, “a moment of silence, a flyover in missing man formation and a speech by the commander of the U.S. Pacific Fleet.”

The event will also be live-streamed at this link.

Of course, the ramifications of the Pearl Harbor attack resonated beyond that tragic day and beyond the border of the United States. In Canada, Prime Minister Mackenzie King’s Cabinet called for the wartime evacuation of Japanese Canadians, showing just how easily liberty can be revoked. Below, we revisit journalist Jayne MacAuley’s feature story that explores the deplorable treatment of Japanese Canadians, originally published in 2012. — Mike Crisolago

February 24, 1942 changed everything for Japanese Canadians. On that day, 12 weeks after Japan’s Dec. 7, 1941 attack on Pearl Harbor, Hawaii, Prime Minister Mackenzie King’s Cabinet passed an order-in-council under the War Measures Act that decreed for reasons of national security, the nearly 22,000 people of Japanese ancestry (75 per cent of them Canadian citizens) living within 100 miles (160 kilometres) of the Pacific coast must be relocated. The military and the RCMP had, however, quietly advised the government that Japanese Canadians were not considered a significant risk.

The real motivation for the order was racism. Influential politicians in British Columbia had pressed the senior government to act. Beginning in 1895, Canadians of Chinese, East Indian and Japanese heritage were not allowed to vote in the province, a situation that also denied them a federal vote and kept them out of certain professions. In fact, they were expected to work at menial jobs for legally sanctioned low pay. Under the War Measures Act, the federal government’s “Custodian of Enemy Alien Property” seized and sold for a pittance, the homes, fishing boats and personal property of Japanese Canadians. Family members were often separated and sent to work or family camps within the province or to farms in Alberta, Manitoba or Ontario.

Frank Moritsugu, 89, of Toronto, points out that no other ethnic groups, including German and Italian, were mass evacuated. Soon after the Cabinet’s decision, his landscaper father was sent from their home in the Kitsilano neighbourhood of Vancouver to the Yellowhead railroad construction camp in B.C. near Jasper, Alta. Moritsugu and his younger brother, Ken, 18, were soon working at a highway construction camp near Revelstoke and by September, his mother and six other siblings were interned – in tarpaper shacks – at Tashme, a family camp (where his father joined them) near Hope, B.C. Their Kitsilano home was expropriated and sold.

After 14 months, concerned about the children’s education (the provincial government refused to provide schooling for evacuees) Moritsugu’s parents opted to go to St. Thomas, Ont., where they worked on the large farm of Mitch Hepburn, former premier of the province. (Moritsugu points out that many younger people had good memories of the camps since mothers and volunteer teachers worked hard to make life as normal as possible for them.) The older sons were allowed to join the family in Ontario since they were all leaving British Columbia.

But the humiliation hadn’t ended. There was the despised registration card all Japanese Canadians (16 and older) had to carry; they had to ask permission of the RCMP to travel 50 miles from home; and even Toronto had a quota on jobs for Japanese Canadians. And Moritsugu still could not vote — or join the military.

In 1945, however, the British and Australian armies needed interpreters to deal with captured Japanese soldiers. Suddenly, the Canadian Army quietly began recruiting among Japanese Canadians. Moritsugu quickly volunteered and became a sergeant with the Canadian Army Intelligence Corps, serving as an interpreter-translator attached and working with Special Force 136, a British counterintelligence unit. No one thought to test the Canadians until they got to India, he says. (He passed the test, although most didn’t.)

Incredibly, after the war, nearly 4,000 Japanese Canadians, many of them Canadian-born, were deported to post-war Japan in 1946 — the result of another order-in-council. It was repealed in 1947 but the wartime restrictions on the Japanese Canadian wouldn’t be completely lifted until 1949. Frank Moritsugu could finally stop carrying his hated registration card. (He would become a successful journalist with the Toronto Star and Maclean’s Magazine — the first Japanese Canadian to do so.)

Japanese Canadians organized, asked for and finally received redress on September 22, 1988, when then Prime Minister Brian Mulroney made a formal apology in Parliament for the injustice. “I never felt that I wasn’t a full Canadian citizen,” Moritsugu says, “but this was the first time I felt that other people were going to realize this.”

Survivors were awarded a sum of $21,000 as symbolic compensation, something Moritsugu felt was necessary to have an impact on Canadians. But he adds, “The amazing amount of individuals and organizations that supported the redress campaign really said an awful lot.”

“Japanese Canadians on the whole do not think of themselves as victims. They are survivors,” Moritsugu notes. It’s a cultural attitude passed down from Japanese-born parents: “That’s what life is and I’m going to hang on and get over it and therefore survive.”

But survivors of the evacuation won’t have to face such a situation again, he says, so he warns younger generations to watch out on behalf of others who might be targeted as scapegoats. “We should be among the first ones to help. For people of my vintage, that thought never really left us. The National Association of Japanese Canadians does and should pay attention when there are other forms of racism that show up for anybody else,” he says.