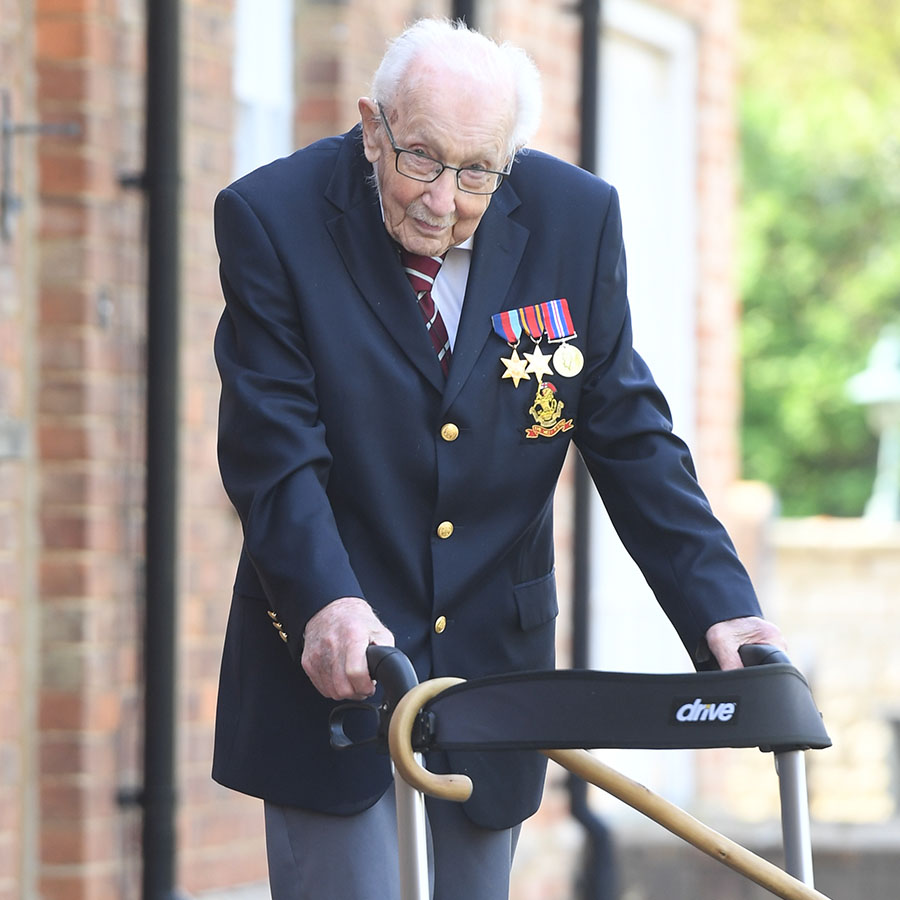 Captain Sir Tom Moore — known affectionately as Captain Tom — inspired the world and raised millions when he embarked on a charity walk ahead of his 100th birthday to raise money for British frontline workers during the COVID-19 pandemic. Photo: Joe Giddens / PA Images via Getty Images

When Captain Sir Tom Moore fought the Japanese in Burma with the Fourteenth Army at the end of the Second World War, he couldn’t have imagined that he’d be fighting another war in his own backyard some 75 years later, brandishing a walker instead of a weapon.

The doughty Brit, who raised £32 million (more than $54 million Canadian) for his country’s beleaguered National Health Service workers by walking around his garden, died today at the age of 100 after weeks of treatment for pneumonia followed by contracting COVID-19.

He was unable to receive a vaccination for COVID-19 because of the drugs he was receiving to treat pneumonia.

In a statement, Moore’s daughter’s Hannah Ingram-Moore and Lucy Teixeira, praised the NHS for caring for their father and noted they were able to spend some final joyful hours with him before he passed.

“We spent hours chatting to him, reminiscing about our childhood and our wonderful mother. We shared laughter and tears together.”

They added that, “The last year of our father’s life was nothing short of remarkable. He was rejuvenated and experienced things he’d only ever dreamed of. Whilst he’d been in so many hearts for just a short time, he was an incredible father and grandfather, and he will stay alive in our hearts forever.”

Among the thousands of supporters paying tribute to Moore was Queen Elizabeth, who is sending a private message of condolence to the veteran’s family.

“Her Majesty very much enjoyed meeting Captain Sir Tom and His family at Windsor last year,” a tweet from the Royal Family reads. “Her thoughts and those of the Royal Family are with them.”

A palace statement added that he provided inspiration “for the whole nation and others across the world.”

To Us, He Was Captain Tom

Neither royalty nor celebrity, Moore — known affectionately to millions as simply Captain Tom — became an icon during the COVID-19 pandemic, his modesty and humility and reaction to what he saw as a simple charitable undertaking endeared him to a nation, and a world, once again at war.

Buoyed by his trademark unwavering optimism that “Tomorrow will be a good day,” Captain Tom’s feat is legend: in April 2020, at the age of 99, he challenged himself to complete 100 laps around his Buckinghamshire garden, using his walker, by his 100th birthday to raise funds for NHS workers who had treated him over the last five years for prostate and skin cancer.

In April, his rendition of “You’ll Never Walk Alone,” the Rodgers and Hammerstein tune from Carousel with British actor and singer Michael Ball topped the U.K.’s Big Top 40 chart — making Captain Tom the oldest person to achieve that feat.

On his birthday on April 30th, he received thousands of birthday cards that overwhelmed his local post office — including one from the Queen — and multiple “flypasts” over his home, including by Second World War-era Spitfire and Hurricane planes. He was also made an honorary colonel.

In July, he received a knighthood from Queen Elizabeth — a celebratory occasion during which Captain Tom was delighted but remained typically humble and straightforward.

In fact, ITV News Royal Editor Chris Ship tweeted about an exchange between the Queen and Captain Tom from the ceremony, noting, “On that day at Windsor Castle, my favourite story was hearing how #CaptainTom politely declined the Queen’s offer of staying for tea, because he had other plans. He had booked a table for his family at a local hotel. So he said thanks, but no thanks (politely) to the Queen!!”

Captain Tom also graced the cover of British GQ magazine — becoming the publication’s oldest ever cover subject — after being named their “Inspiration of the Year” in November.

That same month, Captain Tom launched a new campaign, through a foundation set up in his name, to get people walking to help raise funds for those who feel lonely and frightened during the lockdown.

And during New Year’s Eve celebrations in London, he was honoured with his own personalized fireworks display, complete with his trademark walking aid and military badges. He was hailed by London Mayor Sadiq Khan as a “true national hero.”

As well, his autobiography was published last summer and a film based on his life is said to be in the works.

At No. 10 Downing Street today, where the flag was lowered to half-mast, British Prime Minister Boris Johnson said, “In the dark days of the Second World War he fought for freedom and in the face of this country’s deepest postwar crisis he united us as well. He cheered us all up and he embodied the triumph of the human spirit.”

Meanwhile, Justin Welby, the Archbishop of Canterbury, praised Captain Tom and added, “Where he walked, a nation followed.”

And looking back, Captain Tom’s hundred laps around his garden were a marvel in so many ways. It was, to be sure, a mighty challenge for a man of his years and his medical condition.

It was a feat of resilience and perseverance, and yes, valour.

But what was also marvellous was the reaction it evoked. People needed and, it turned out, wanted to be reminded that resilience and determination can triumph over surrender and despair. They — we, all of us — wanted heroes and leaders to show us how to push through the darkening shadow of the pandemic. And Captain Tom, the centenarian who circled his garden with a walker, became our rock.

And for those of us who are elderly in an ageist society that dismisses us as unproductive and irrelevant and therefore expendable, as weak and useless ancients whom it is pointless and unnecessary to protect at the expense of younger people, Captain Tom was an inestimable reminder to the world that every human being at any age is valuable and deserving of life.

In the wake of his passing, social media was flooded with tributes to Captain Tom.