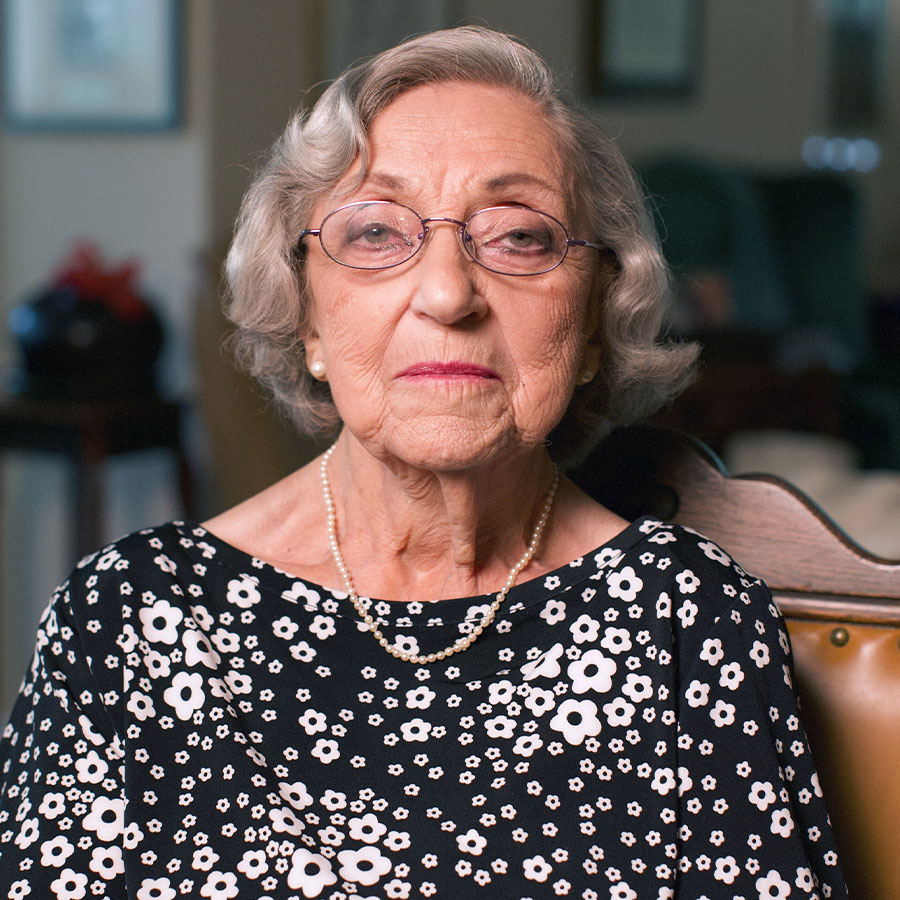 Judy Weissenberg Cohen, a 92-year-old Toronto resident was 16 when the Nazis wrenched her from her home in Hungary and sent her to Auschwitz. Photo: Courtesy of the Azrieli Foundation

International Holocaust Remembrance Day is observed on Jan. 27, the anniversary of the day in 1945 when the Auschwitz death camp was liberated.

We mark this day annually because we can never forget what happened there and because the remembering moves us to vow “Never again.”

Today, in another century, some eight decades after Auschwitz, the shadow of hate and evil and human depravity that darkened the world then is lengthening again.

There are gathering forces of an aggressive global far right movement  encompassing anti-Semites, white supremacists and neo-Nazis that is threatening religious, racial and ethnic minorities.

In the mob that overtook the U.S. Capitol last January, there were people wearing shirts with hateful anti-Semitic slogans like “Camp Auschwitz” and “6MWE,” which stands for “6 Million Weren’t Enough” — a reference to the six million Jews murdered during the Holocaust.

Also last January, the Nazi swastika was painted on a Montreal synagogue.

This month, a rabbi and congregants at prayer in a synagogue in Texas were held hostage by a gunman.

Today, the urgency to declare “Never again” and to insist “Never forget” is fierce indeed.

There can be no forgetting for Judy Weissenberg Cohen.

The 93-year-old Toronto resident was 16 when the Nazis wrenched her from her home in Hungary and sent her to Auschwitz in a cattle car.

For many years, Cohen spoke out as a witness to the Holocaust and when she was 90, she felt the time had come to write about her life. Her detailed, eloquent memoir, “A Cry in Unison: Sistering for Survival,” was published last year by the Azrieli Foundation as part of its Holocaust Survivor Memoirs Program.

“If our survivors had the courage to speak and write and share their stories,” says program director Jody Spiegel, “we have a duty to share their legacy.

“We owe it to the survivors and those who didn’t survive that we take the time to learn about the complete events that happened instead of watering it down to sound bites and using the Holocaust as a metaphor.”

Another project to document the experience of the Holocaust is Dimensions in Testimony, an initiative produced by Steven Spielberg’s USC Shoah Foundation. Using AI technology, Holocaust survivors who are filmed discussing their experiences are turned into interactive holograms, which the public can engage with in a real-time conversation. The first interviewee was Toronto resident Pinchas Gutter, who has also participated in the Azrieli Foundation Holocaust Survivors Memoirs Program.

Cohen’s book recounts her life as a schoolgirl in a large Jewish family in Debrecen, Hungary’s second largest city, of the journey from home to the horrors of the desperate daily fight to survive in Auschwitz and Bergen-Belsen, the death march to freedom, post-war life in a displaced persons camp and, finally, emigration to Canada where she married and became a mother.

All of that is narrative, and it is compelling. But equally compelling is the telling of loss, of resilience, of human nature and human behaviour and of sisterly bonding and love. Cohen was one of the first survivors to focus on women’s experiences of the Holocaust.

I asked her whether she thought the Holocaust or something like it could ever happen again.

“It is easily conceivable that given similar political and legal circumstances and official encouragement like during the Nazi Holocaust,” she said, “the popular attitude against the Jews would be the same, even more so if people can see personal gains from our plight.”

In her book, Cohen recalls how neighbours and longtime family friends cheered and laughed as her family and other Jews were marched from their homes to a crowded, fetid brick factory until the trains came to take them to Auschwitz.

“These people, many of whom had been friendly with our parents for 30-some years, had become adversaries,” she writes. “It was difficult for my young mind to understand this, and it is still incomprehensible.”

Even on the boat bringing displaced persons, including Jews and non-Jews to Canada, Cohen recalls, “Jews on the boat suffered from …anti-Semitic remarks. Anti-Semitism was the last thing we expected to accompany us on our way to a new life.”

While anti-Semitism and hatred of ethnic minorities and those regarded as “others” may always be present somewhere deep in the human psyche, it’s important to keep it from erupting again in the way it did in the Holocaust, Cohen believes.

“Young people now and in the future need to learn how the Holocaust happened – the political and social process of 12 years that led from parliamentary democracies to the gas-chambers of Nazi-occupied Poland.

This would give them the tools to recognize the signs should those destructive, evil ideas and their implementations surface again.”

Talking about the horrors of the Holocaust is necessary, she says, “but that’s the end game, the result of the process. The Holocaust happened with words, with propaganda — social media today comes to mind — and not with the cattle cars and gas chambers.”

Acknowledging that Holocaust history will keep fading into the background as time passes, Cohen says it’s also important to remember the people who perished in the death camps, as did most of her family.

“Six million Jews died, and we need to know how they lived,” observed the Azrieli Foundation’s Jody Spiegel. Cohen’s book, she said, includes “a beautiful look at Hungarian Jewry before the war. We need these stories and the witnessing to an atrocity that sadly is being forgotten.”

It’s not only what happened during the Holocaust that must be remembered but how it could happen — how an educated, cultured, sophisticated democratic society in the 20th century could deem it appropriate and necessary that the Jewish people and millions of others also regarded as less than human should be starved, tortured and exterminated.

But let us remember also the resilience, combined with luck and instances of kindness and compassion that allowed some to survive.

“We tried to adjust to constantly changing conditions, called forced flexibility,” explains Cohen, “to discard long-term planning; shrink our expectations for the future; support each other emotionally; endure the inevitable; and hope for just mere survival; avoiding death if possible but sometimes it looked inviting; quietly mourn our immense losses. But keep a tiny bit of hope alive.”

International Holocaust Remembrance Day is being observed with many free, virtual events this year. Here are three.

1. Cohen will be one of the panellists at a University of Toronto International Holocaust Remembrance Day event taking place today from 2 p.m. to 4 p.m., presented live on Zoom (link information follows). The panel discussion,”Memoirs from the Fire: Acts of Salvage by a Holocaust Survivor, a Scholar, and a Collector,” is the annual Wolfe Lecture on the Holocaust.

Panellists include University of Western Ontario professor Alain Goldschläger, who amassed one of the world’s largest and most diverse collections of Holocaust memoirs, with over 3,500 volumes in nearly 30 languages from 44 countries from all the populated continents on the globe. He recently donated the collection to the University of Toronto. The event today inaugurates the Goldschläger Collection of Holcaust memoirs and literature into the University’s Thomas Fisher Rare Book Library. The panel will explore the significance of Holocaust memoirs in the ongoing study and commemoration of the Shoah.

Click here and use the passcode 104746 to join the event.

Participants include David Klevan of the United States Holocaust Memorial Museum who will discuss History Unfolded: Newspapers of the Holocaust, and video game developer Luc Bernard who will be debuting the first gameplay footage of his project The Light in the Darkness. The discussion will include how museums are preparing to reach the next generation of learners during the post-survivor age with digital narrative technologies. The program will include introductory remarks from Consul General of Germany in Toronto, Thomas Schultze, and Neuberger Executive Director Dara Solomon will conclude with a look at the new Toronto Holocaust Museum.

Register for a free account on the Virtual J in order to view this program.

3. The Canadian Museum for Human Rights and the Jewish Heritage Centre of Western Canada will join with the Portuguese community of Winnipeg to present an event at 5 p.m. CT today honouring the memory of Aristides de Sousa Mendes with a film about this courageous diplomat followed by a Q&A.

The Ambassador of Portugal to Canada will also be bringing greetings.

Aristides de Sousa Mendes served as the Portuguese Consul in Bordeaux, France during the Second World War. He defied his government by providing visas to some 30,000 people, including approximately 10,000 Jews. A Portuguese visa would allow them safe passage through Spain to Lisbon, where they could travel to other parts of the world. For his act of defiance Sousa Mendes was severely punished by Portuguese dictator Antonio de Oliveira Salazar, stripped of his diplomatic position and forbidden from earning a living.

Before his death in 1954, Sousa Mendes asked his children to clear his name and have the honour of the family restored. His sons and daughters, along with their children — now scattered all over the world — have fought for decades to have his deeds posthumously recognized. On Oct. 18, 1966, Yad Vashem, of the World Holocaust Remembrance Center, recognized Aristides de Sousa Mendes as Righteous Among the Nations.

Yiddish Glory and the Lost Songs of the Second World War

Max Eisen On Recounting Auschwitz in His Book