No Place Like Home: Discovering a Missing Connection to the Past 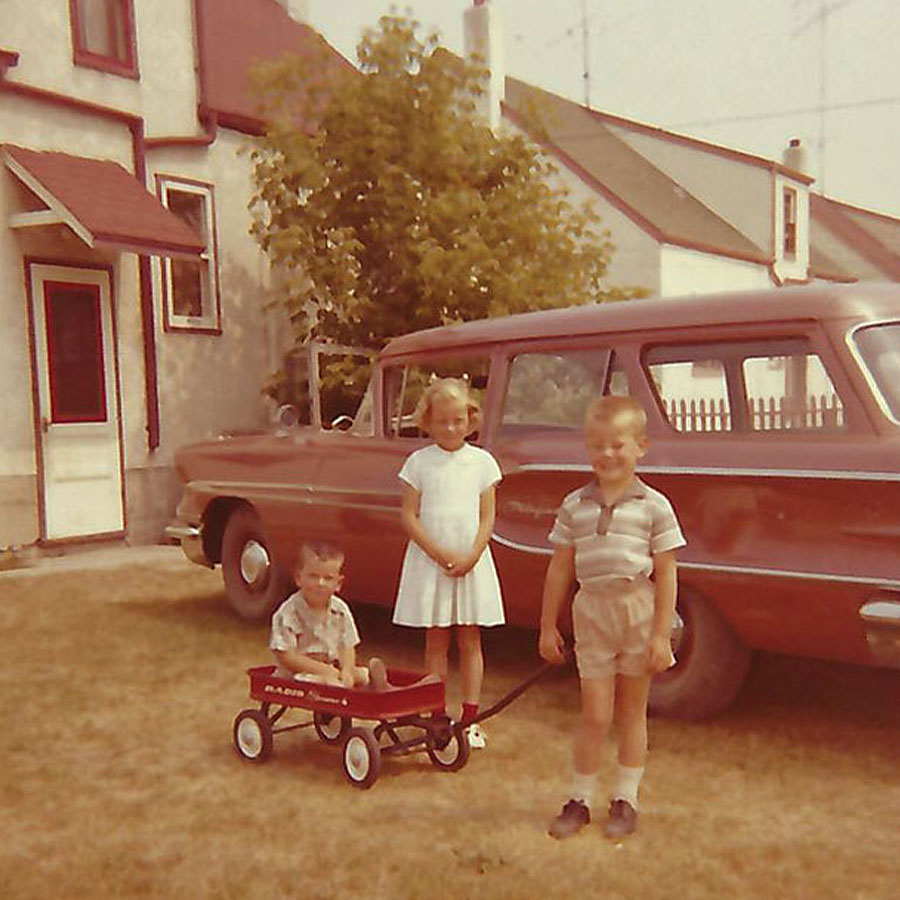 On a visit to her hometown during the pandemic, Journalist Ellen Vanstone — pictured above at play with her brothers in Winnipeg in 1961 — discovers a missing connection to her family and past. Photo: Courtesy of Ellen Vanstone

Can you go home again? Of course you can, barring restrictions caused by pandemics, pets, or partners in your life. The question is: Why would you?

I came up with some passable answers to this question when friends in Toronto asked why I was going for an extended “visit” to Winnipeg last year. (“Winnipeg? Why?!”) I told them my crowded Toronto neighbourhood felt claustrophobic under lockdown. That everyone worked on Zoom, so it didn’t matter where I lived. That my Toronto-born daughter was launched. That I owned a squirrel-infested bungalow in my hometown and had to decide what to do with it before it became a health and safety hazard.

The real answer was: I had no idea why I was going back. I just got in my car one hot August day in 2020, left my daughter in charge of my condo, and drove west in a fit of 60-something restlessness. And then I stayed.

Part of the allure was family. I have five siblings — three brothers and two sisters — who get together with partners and kids at least once a month for a meal, and who see each other regularly in between to share tools, food, babysitting, a trip to Costco or a carefully distanced meet up in the park during various lockdowns. After years of living alone, assiduously shunning such herd-mentality conventionality, I suddenly found these rituals to be exotic and heartwarming.

Admittedly, there are also those zero-to-60 moments when the hot rage of childhood defies years of therapy and roars to life at the drop of a tea towel. As in: “Yes I dried my hands on your tea towel instead of the designated hand towel so sue me besides you always move my tea towels onto my oven door handle which I hate because they drag on the floor when you open the door and you’ve been trying to control me from the second I was born —”

As a mature 66-year-old, I don’t actually say these things. I simply watch my dark thoughts pass whilst spending a pleasant hour a-fuming chez moi. And indeed all is forgotten, if not forgiven, when my sister interrupts my revenge reveries to drop off a Lee Valley push mower she thought I could use, or to tell me about her latest experiment: electrocuting a pickle because she read on the internet that pickles can conduct electricity, although all she succeeded in doing was blowing a fuse.

Every family has a “crazy sister,” but I think in our family that title might be up for grabs.

As it turns out, I’m right on trend in terms of seeking out family after being away. When my neighbour April, an educational psychologist, asked why I came back, I admitted I wasn’t sure, but that increased contact with family members was a bonus. She nodded, saying research on sibling relationships showed this exact tendency in middle and old age. We’re drawn to the people who know us best and with whom we share an easy shorthand for memories and experiences that are important to us.

Another reason for my return might be that I never meant to leave in the first place. I went to Toronto 40 years ago to study journalism and stayed because I couldn’t get hired at the Winnipeg Free Press. After repeatedly applying in vain, I eventually scored an interview in the early ’80s while home for Christmas. I went to the Bay and bought a stretchy, synthetic shirt dress in the maroon colour popular in that god-awful decade. I felt elegant and professional as I buttoned up my winter coat, and headed out.

Alas, when I unbuttoned in the office of then Managing Editor Murray Burt, the Winnipeg winter had done its worst. The air crackled with static electricity as every hair on my head zinged skyward and every cheap nylon-polyester thread of my dress zapped inward. The effect might have been sexy, albeit inappropriate, except the clinging dress was a voluminous ’80s number, and the yards of cheap material were bunched in clumps across my body, while the bit of leg I revealed featured a similarly lumpy terrain of pilled tights.

I have no recollection of the interview, except that Mr. Burt was kind in keeping it short, and quick in sending a rejection letter.

Every corner of every street evokes similarly vivid memories. I remember millions of precious moments with my late, long-suffering Mom and Dad, and I miss them. Other memories are random, yet profound, like an incident in grade school with a boy named Gilbert, a wild kid with dark hair that stuck straight up like a hedgehog. We barely spoke during eight years together at Our Lady of Victory School. But 55 years later, I clearly remember the day I got caught passing a note, which the teacher confiscated and placed on her desk, telling me to stay after school. I was terrified. The note was an entire sheet of foolscap with a list of code names for all the nuns who taught us. The only one I remember is “Pimple Puss” for Sister Aloysius, which was not only cruel but also inaccurate since Sister Aloysius was old and certainly had no pimples. I knew it would hurt her feelings if she saw the note because she thought I liked her, which I did, so why did I concoct such a stupid list?

The final bell rang. The class followed the teacher into the hallway — all except Gilbert, who lagged behind, then pounced like a ninja as he passed the teacher’s desk, swapping a new piece of crumpled, scrawled-on foolscap for my long, detailed note.

When the teacher came back, she saw my note had been replaced, but I was sitting too far away to have done the swap myself.  She glared, sighed and waved me out of the room.

I vaguely remember thanking Gilbert. At least I hope I did. I look back now and marvel at how clever and gallant he was, and think how much of my safe, lucky childhood I took for granted.

Unfortunately, it also makes me think of the clever, gallant friends I’ve made in Toronto — a different kind of family who’ve seen me through a roller coaster of parenthood, divorce, career and frequently bizarre living arrangements.

Can I go home again? Are they both home? I still have no answers, but at least I’ve learned it’s a good problem to have.

A version this article appeared in the Dec/Jan 2021 issue with the headline “There’s No Place Like Home,” p. 58.