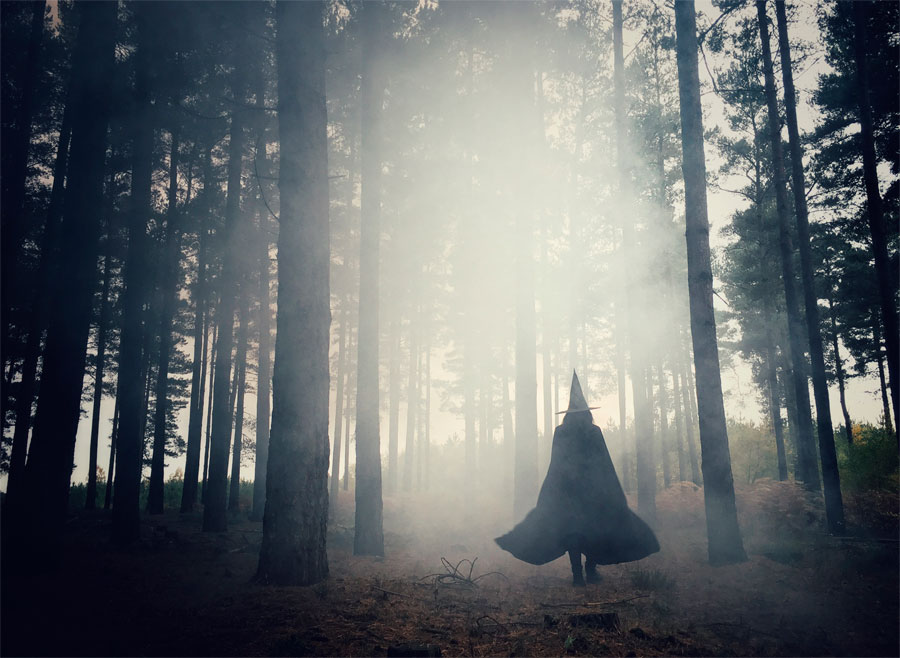 I’m pretty sure I’ve been cursed. And it has everything to do with this story about witchcraft. If I’m honest, the whole enterprise seemed risky the moment my pitch “The Witches of Victoria!” left my email with that ominous “swoosh.”

My trepidation actually grew as friends and co-workers learned of the assignment.

“You’re writing about the witches?” was the common, wide-eyed refrain. “Be careful! They’re a sensitive bunch.”

Despite these warnings, the witches I contacted were open and willing to share — not that I would blame a witch for being on guard around a writer. Historically, they haven’t been painted in the most flattering of lights. The Bard himself was guilty of the poison pen: “Double, double, toil and trouble: Fire burn, and cauldron bubble.” Oh, those scheming crones.

The witches are so obliging that I soon find myself in my first casting circle, clustered with four other women around a makeshift altar in the centre of Alison Skelton’s suburban living room.

“For me, Wicca is an embodied spirituality, and the experience of being in the room sharing energy with other people is an essential part of it,” Skelton says.

When I first moved out West, a co-worker casually suggested I engage Skelton, a 58-year-old Wiccan priestess and shaman, to bless my new apartment and exorcise any ghosts haunting the century-old loft conversion. At my bewildered expression, my co-worker explained, “It’s pretty woo-woo out here.”

After living 25 years in Toronto, a wine-and-cheese evening was my go-to house warming, not a smudging. How could I resist this topic?

But the more I learn about it, the more the subject makes me cautious. This is a group’s faith, and the terrain in the popular media has been rocky.

“You have 400 years of negative representations,” says John Threlfall of the faculty of fine arts at the University of Victoria. One of Victoria’s most prominent witches, the 53-year-old writer was initiated into the craft 30 years ago.

“I study popular culture and how the depiction of witchcraft in those forms has really influenced public perception,” he says. “Shakespeare was writing to a populist audience during the witch trials and was reflecting what they wanted to see — that coupled with the mainstreaming of Christianity and the introduction of printing press. One of the first books to hit the mass market demonized the pagan gods. It’s still an issue — equating witchcraft with Satanism.”

Look at the acclaimed 2015 horror film The Witch. Set in Puritan New England, it embraces all the clichés with terrifying enthusiasm, down to a nude cabal in the woods in cahoots with the dark lord himself (in the form of a horned goat, of course).

“The use of the pentagram in pop culture is a another good example of the kind of thing that can cause misconceptions,” Skelton says. “You’ll be watching some police procedural and, as soon as you see that pentagram on the wall, you know it’s the spooky woo-woo. I think it’s unfair and misleading. It’s a symbol that’s been perverted.”

As a long-time spokesperson for the witching community, Threlfall works to debunk these stereotypes. Our conversation at a local coffee shop is fascinating, but awkward. He’s charming and engaging, but I’m nervous about offending with insensitive questions. And I have a pinched nerve in my ribs that causes me to occasionally squeak in pain (I wonder later if this is the first physical manifestation of the curse).

Through Threlfall and Skelton, I learn that Wicca, or witchcraft, bears little resemblance to what we often see in pop culture. It is a practical, down-to-earth “kitchen-sink kind of a faith” that emphasizes the natural world and the spiritual powers it possesses. Along with the seasonal cycles and eight major celebrations at the solstices, equinoxes and cross quarters, there are opportunities for celebration everywhere, including handfastings, child namings, birth blessings and rites of passage. “All the same sorts of things that other faiths and traditions might have, but we write our own or develop our own purposefully,” Skelton says.

While some witches practise in covens, it can also be an individual experience.
For Threlfall, the dramatic rituals performed with a coven are one of the appeals of the craft.

“You get those images in your head of what that could be, and it was totally that,” he says, describing his own initiation. “We were in a clearing in the woods with a little fire and a little cauldron during a full moon. It was fantastic.”
He sees many baby boomers turning to Wicca as they look for meaning and community in later life — something beyond the North American priorities of money and financial success.

“I think that’s true of a lot of people who came out of the baby-boom generation,” he says. “Unless you came from a family of faith, success in society became your faith.”

Another clue to the appeal of Wicca for boomers is found in The Spiral Dance: The Rebirth of the Ancient Religion of the Great Goddess by Starhawk, one of the books Threlfall recommends as a modern classic of the craft.
“Old age in witchcraft is seen positively as the time when activity has evolved into wisdom,” Starhawk writes. And later, “All phases of life are sacred: age is a blessing, not a curse.”

Threlfall also draws comfort from Wicca’s central tenet of reincarnation, calling it a “holistic” practice, where one builds on the knowledge of past lives and is able to incorporate that wisdom into their worldview as they move into future lives.

As for Victoria being the “witch capital of Canada,” he tells me he moved to the city in the early ’90s because it was known as an “out witch-town,” where he could find a supportive community and join a coven and where he could openly wear his pentagram, a symbol of meditation and protection, not dissimilar to the Christian cross.

“It’s hackneyed now, but I would say at the time that being a witch in Victoria was like being gay in San Francisco,” Threlfall says. “It was an accepted subculture. That’s not really true anymore because it’s become so mainstream here now it’s not really a subculture. People take a curious pride in knowing one of Victoria’s witches.”

But the harmful misconceptions about Wicca and witchcraft have even been felt in witch-friendly Victoria, the setting for the now-debunked repressed memory-Satanic abuse bestseller Michelle Remembers — a book that ignited widespread panic about Satanists in the 1980s. But, as Skelton explains, in Wicca there is actually no concept of a devil. When Christianity started converting pagans, some of their gods became saints and some became demons. The devil is a conglomerate creature, his appearance based on images of the pagan horned god, who actually represents the wildness of nature — “an idea that may not have been entirely comfortable to the Church.”

So how to portray Wicca in an accurate fashion? Major writer’s block, story-related insomnia, acute vertigo, back pain, three pushed deadlines and countless drafts later — surely, these are symptoms of a curse — see me contacting Skelton again to attend one of her spiritual workshops. As I see it, my understanding of the craft would benefit greatly from some firsthand experience.

Which is how I find myself in that casting circle. The air is fragrant and smoky with incense. One woman has brought a smudging stick, a pink crystal and a bundle of feathers, so these objects can be charged with the energy from our casting. Our group is creating a “thought form of love” by sharing words we associate with the emotion, first projecting our loving energy into the circle and then shining it out into the wider universe.

While this situation may seem woo-woo, the emotion it instills is not. The workshop includes some communal spell work and much meditation, and I leave feeling centred and positive: my skeptical Toronto self quiet for the moment (some would call that magic alone). And far from consorting with dark lords, the intention was to foster self-love as well as love and acceptance in the world — something that some faiths seem to have lost.

Skelton runs these spiritual workshops as part of her shamanic practice, but she is also one of the founding members of the 13th House Mystery School, which offers a 13-week introduction to the philosophy and ritual practice of Wicca. Many of the participants are women, 50 years old and older; she believes the majority are looking to regain something.

“Some may feel that they came into this world being very sensitive, very open and aware and then something happened in their lives or something frightened them. Their circumstances shut that down,” Skelton says. “But they’re aware that it’s been in the background waiting and dormant, and they want to reawaken it.”

As for my journey, along with learning that love spells work (according to Skelton, they are “ethically unsound”), I discover that curses are also real. Any thought that is sent into the self or projected at another person with enough emotion and force is a curse.

“We have to redefine our idea of what a curse is,” she says. “Curses are flying around all the time. We can self-curse. It’s not some old woman sitting with a caldron, saying may all your hair fall out.”

Again, we can all thank Shake-speare for that image. And it seems my own doubts and misgivings have been at the root of my problems all along. Luckily, curses can be broken.

“Everybody has patterns of belief or thought or energetic patterns that are disempowering and keep us captured in a cycle of self-limiting beliefs,” she says. “But any pattern that’s been created can be uncreated. These patterns take an enormous amount of our power to maintain or to avoid. Once the pattern has been collapsed through this spiritual work, all of the power you have invested in the pattern gets returned to you as pure power.”

Skelton then sums up much of the appeal of her faith with a single sentence.
“Then it’s up to you to do whatever you want with the power.”