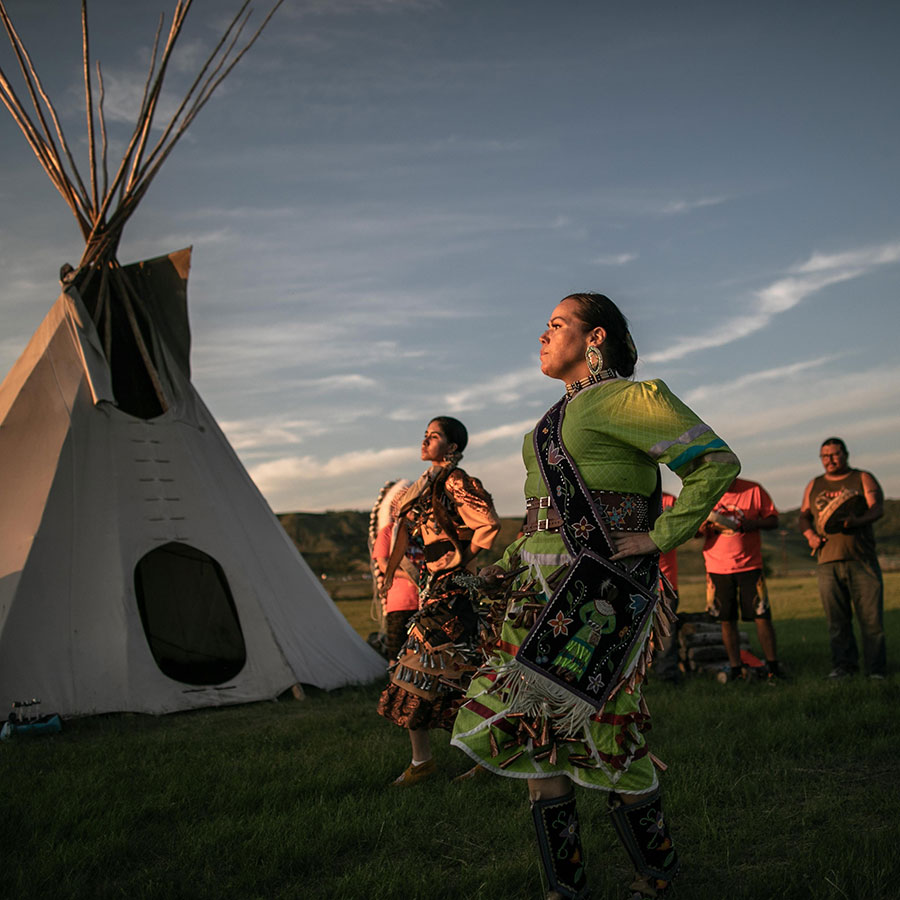 Women from Cowessess First Nation perform a ceremonial dance to commemorate the 751 victims discovered in unmarked graves on the site of a former residential school in Marieval, Sask., in June. Photo: Amru Salahuddien / Anadolu Agency via Getty Images

As Canadians are once again confronted by the genocidal reality of Indian Residential Schools (IRS), some continue to ward off this painful history and legacy through the magical invocation of “good intentions.”

Last week, Father Rhéal Forest was banned by the Archdiocese of St. Boniface in Winnipeg from speaking publicly in wake of remarks to parishioners where he said that every residential school student he had met had loved it. He went on to minimize the harms of the system by suggesting that many of those who complained of abuse were lying, and that if there was abuse, it was by the night watchmen, not the clergy.

The Truth and Reconciliation Commission reports are clear. The express intent of IRS was to “civilize” Indigenous children and assimilate them into society. As a model for the residential school system, the 1879 Davin Report recommended the Carlisle Indian Industrial School, who’s architect Richard H. Pratt, described his philosophy as, “kill the Indian, save the man.”

First Nations had initially negotiated the provision of a school on every reserve in the numbered treaties. But what they envisioned was a system of local schooling, overseen by the community, something along the lines of a “big teaching wigwam” to use the term of Chief Shingwauk.

That vision was not to be realized, both the church and the state saw education as a means of assimilation.

Roman Catholic Bishop Vital Grandin, was a champion of the residential school system. His vision for the delivery of this education exploited the willingness of First Nations. He argued:

While some Indigenous people were indeed interested in receiving English or French education, they were not agreeing to have their own culture and language erased.

What drove Bishop Grandin to advocate such an assimilationist vision of education?

During the Victorian period there was a widely held belief among British imperialists that Indigenous people were on the verge of extinction. It was believed that they were savages, and that savagery was self-extinguishing.

This belief came about over archaeological findings of impressive ancient structures in the Americas that fuelled various pre-Darwinian theories of human origins that saw Indigenous people as having degenerated from a more advanced race and society. This thought process masked the way foreign disease and violent colonial policy were actually responsible for declining population numbers.

It also provided plausible deniability to the colonial powers, allowing them to perform what scholars Eve Tuck and Wayne Yang have called a “settler move to innocence,” while simultaneously enacting policies of genocide and displacement.

It allowed many settlers to believe that the “humane” solution to rapidly disappearing Indigenous populations was to educate them into civilized society. One can see this at work in the so-called Indian poems of Duncan Campbell Scott, former deputy superintendent of Indian Affairs.

In Scott’s poem, “Forsaken,” a Chippewa woman is depicted as doomed and unable to feed or provide a future for her son. In desperation, she leaves her child at the settler fort where he will have a future in the new society.

It should come as no surprise that Scott, the man who wrote such hauntingly evocative poetry, also oversaw the largest expansion of the IRS and notoriously said in its defence:

“I want to get rid of the Indian problem… Our objective is to continue until there is not a single Indian in Canada that has not been absorbed into the body politic and there is no Indian question, and no Indian Department…”

According to feminist philosopher Rae Langton, this kind of speech only succeeds by keeping certain premises unsaid.

The residential school system was constructed with “good intentions” if we believe that education and civilization are unqualified goods. But I have pointed to numerous instances that show that the intent of both church and state was to kill or suppress Indigeneity so that the Crown’s assertions to sovereignty could not be challenged.

When Wab Kinew interrupted Manitoba’s Minister of Indigenous Reconciliation and Northern Relations Alan Lagimodiere’s remarks, claiming that “the residential school system was designed to take Indigenous children and give them the kind of skills and abilities they would need to fit into society as it moves forward,” Kinew exposed the unspoken settler-assumption that the purpose of the schools was benign and progressive instead of genocidal and erasive. By doing so he broke the spell of ignorance and erasure that the “good intentions” rhetoric so often achieves.

Dene scholar Glen Coulthard has pointed out that settler Canadians are eager to put the evils of the IRS firmly in the past. He points to former prime minister Stephen Harper’s 2008 apology that historicizes the residential school system as a “sad chapter in our history.”

But reconciliation cannot happen when the truth of IRS’s continues to be denied and its history of erasure continues to be enabled by discourses like the myth of “good intentions.”

If reconciliation is still possible it must involve settler Canadians learning to speak truthfully and consistently about the harms that took place, their lasting impacts and a commitment to follow the example of Kinew and others in countering speech that denies genocide.

Ryan Turnbull is a Phd candidate in Theology and Religion at the University of Birmingham.