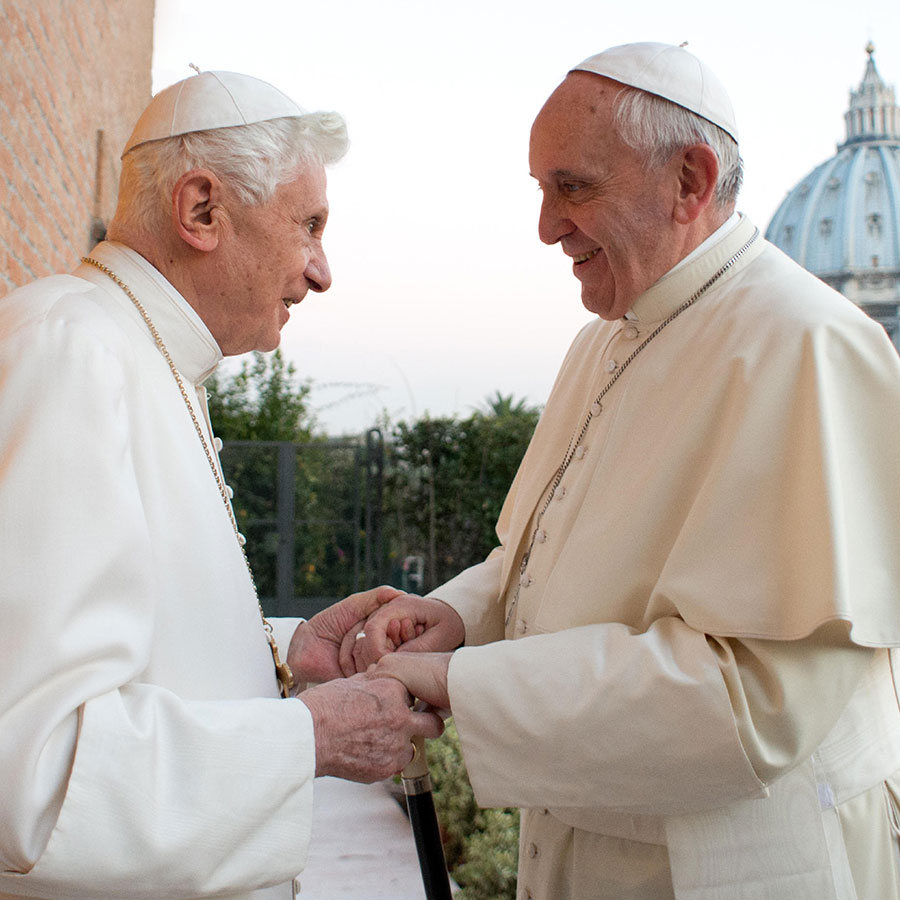 Pope Francis praised the late Pope Benedict — seen here together in 2013, the year the latter retired — ahead of his funeral on Thursday. Photo: Maurix/Gamma-Rapho via Getty Images

The Vatican on Wednesday served up a surreal moment in which a living pope spoke to some of the faithful in one part of the tiny city-state while others a short distance way were honouring a deceased former pontiff.

Pope Francis held his general audience in a large modern hall, a routine event for a Wednesday.

“I would like us to join with those here beside us who are paying their respects to Benedict XVI,” Francis told several thousand people at the start of his audience, in which he is concluding a catechesis, or religious teaching.

Francis, 86, who will preside at Benedict’s funeral on Thursday, called his predecessor “a great master of catechesis.”

Benedict, a towering theologian and hero to conservative Catholics uncomfortable with Francis’ more progressive papacy, in 2013 became the first pope in 600 years to resign instead of reigning for life.

At about the same time as Francis was speaking and only several dozen metres (yards) away, the great doors of St. Peter’s Basilica were being opened to the public for the third and last day of public viewing of Benedict’s body.

As of Tuesday night, about 135,000 people had filed past the former pope, who has been lying in state without any papal regalia on a catafalque, a raised bier, before the basilica’s main altar.

The decision not to have them during the public viewing appeared to have been decided to underscore that he no longer was pope when he died last Saturday at the age of 95.

The viewing is due to end at 7 p.m. on Wednesday and shortly afterwards Benedict’s body will be placed in a coffin made of cypress wood.

With him will be coins and medals minted during his eight years as pope and a sealed lead tube holding a deed written in Latin describing his pontificate — all customary for funerals of popes.

Also placed inside will be three palliums — bands of wool cloth worn around the neck by popes, archdiocesan bishops and other bishops with territorial jurisdiction, to signify their roles as shepherds of their flocks. Popes are also bishops of Rome.

The coffin will be placed on the ground near the outside steps of St. Peter’s Basilica and the faithful will say the rosary before the funeral Mass begins.

Benedict had left word that he wanted his funeral to be simple.

The liturgy for the Mass will be based mostly on that for a reigning pope, with some minor modifications, Vatican spokesman Matteo Bruni said.

Some prayers that are specific to the death of reigning pope will be omitted but there will be prayers for both Benedict and Francis, he said.

Benedict will be buried according to his wishes in the same spot in the crypts under St. Peter’s Basilica where Pope John Paul II was originally interred in 2005 before his body was moved up to a chapel in the basilica in 2011.