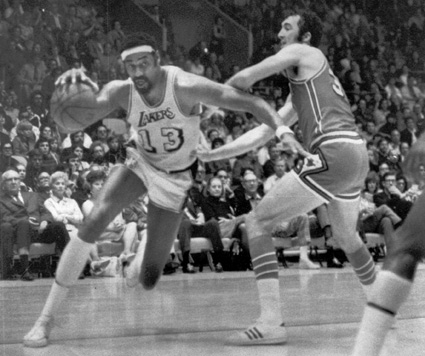 Today is the anniversary of the birth of basketball. Back in 1891, Canadian Dr. James Naismith, a phys-ed teacher from Springfield, Mass unveiled a game to keep gym class active on a cold day. Nailing a peach basket 10 feet up on a wall, he instructed kids to throw a ball into it. From these humble beginnings, basketball was born.

The game has obviously changed greatly since those days (they no longer use a peach basket) and is now a hugely popular game played all over the globe. Let’s take a look at its evolution.

In its infancy, basketball’s popularity took off at the college level. However, the professional game took a lot longer to get going. Early squads like the Original Celtics and African American squads like the New York Renaissance Five and Harlem Globetrotters toured the country playing exhibition games.

The rules of the game solidified, (and a 24-second clock added to speed up play) the professional game really took off. Great teams like the Boston Celtics and L.A. Lakers became dominant and fabulous players like Bill Russel (5 MVPs, 11 titles), Oscar Robertson, Jerry West and the incomparable Wilt Chamberlain (who, in 1962, scored 100 points in a game helped increase the game’s popularity.

Stars such as Kareem Abdul-Jabbar, Walt Frazier and “Pistol” Pete Maravich brought the NBA to new levels of success. With this came a new league, the American Basketball Association. ABA players such as Julius “Dr. J” Erving, Artis Gilmore and George Gervin introduced fans to a more exciting brand of basketball — not to mention multi-coloured basketballs and amazing afros!

The ABA merged with the NBA and the league was laden with talented, marketable stars. Dr. J brought his magic to Philadelphia and Boston’s Larry Bird and L.A.’s Magic Johnson continued their gripping college rivalry in the pros. Then in 1984, came Michael Jordan, who’s air-defying moves and will to win made him a world-wide cultural phenomenon, transforming basketball into the global sport it is today and singlehandedly popularizing the Nike brand. The late ‘90s also saw the rebirth of pro-basketball in Canada, with the birth of the expansion Toronto Raptors and the (since-departed) Vancouver Grizzlies.

Despite the fact that he hasn’t won a championship and is detested by the people of Cleveland, the modern era of basketball belongs to Lebron James. Still 26, the Miami Heat small forward never ceases to amaze with his skill and marketing savvy. With the NBA lockout now settled, it will be interesting to see if this is the year that King James finally wins an NBA championship ring.