You Free Next Sunday For Dinner? 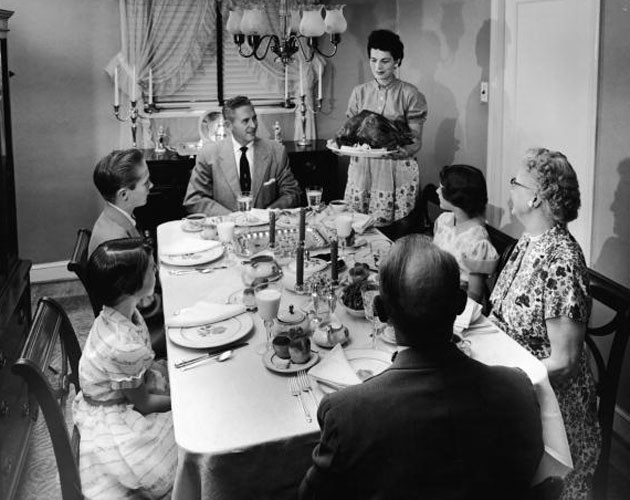 Recalling the glory — and the gravy — of those delicious weekly repasts

The American wit Dorothy Parker once opined that the two most beautiful words in the English language are “cheque enclosed.

”Cute — but not even close. The two most beautiful words in the English language are “Sunday Dinner.”Or used to be. Sunday Dinner hails from a simpler, statelier time when Pop went out to work, Mom ruled the roost and any kid foolish enough to whine about “entitlement issues” probably would have been gonged with a gravy ladle.

Undemocratic? Decidedly. Stodgy and stultifying? A little. But there were compensations — like the pungent pageant that unfolded on the spanking white dining room tablecloth every Sunday afternoon. Sunday Dinner. There was a time, my friends, when the days of the week were stacked in descending order from that sacrosanct Sabbath day institution.

Some called it Sunday Roast or Sunday Tea. I’ve also heard it referred to as Sunday Joint. A friend from Corner Brook assures me that all the Newfoundlanders she knows call it Jigg’s Dinner. What it never was was optional. Friends and even strangers might be present by invitation, but if you were family, in town and vital enough to hold a knife and fork, then you Would Be At The Table on Sunday afternoon, no question about that.

Sunday Dinner — at least around my place — was flamingly sexist. The menfolk commandeered the parlour, confidently settling all political conundrums, foreign and domestic. Meanwhile, in the kitchen, the women toiled and tut-tutted, red-faced, over steaming pots and simmering pans. Roasted potatoes, cauliflower, cabbage, green beans … ah, the aromas.

And, of course, the roast itself. Beef, traditionally, but it could be pork or lamb. Or even duck or goose. The gravy mattered immensely. You would think the cooks were decanting century-old cognac the way they fretted over the gravy bubbling in the roasting pan — stirring, sniffing, sipping, stirring again. Too thick? Too thin? The horror.

It was a seventh-day wonder, the Sunday Dinner. For many of us, the sole remaining weekly occasion on which the whole family routinely came together to … well, be a family, I guess. Today, we still throw special feasts — Christmas and Passover, Thanksgiving and Easter — but they’re more sporadic and consequently more stressful.We live in a fractured and frenetic time. What with Twitter and takeout pizza, Sunday televised football and those ubiquitous iBuds in every earhole, it’s difficult for a ritual as communal and hierarchical as the Sunday Dinner to survive.

Although Jim Haynes might give you an argument on that. Jim hosts a massive dinner every Sunday afternoon without fail. If you think I’m exaggerating, check it out — Google “Jim Haynes Sunday Dinner.” Better still, show up next Sunday yourself. You’re invited. As am I. Anybody on the planet can be on the guest list as long as they call or e-mail to let Jim know they’re coming. Fifty or 60 drop-ins are not uncommon — twice that in the summer when diners can spill out into Jim’s garden. Everyone and anyone is welcome. All races, ages, nationalities, languages and religions. “I believe in introducing people to people,” says Jim in what remains of his cozy Louisiana drawl. “If I had my way, I would introduce everyone in the whole world to each other.”

And no one can say Jim Haynes isn’t doing his level best to make that happen. He’s been hosting his Sunday Dinners every week for the past 30 years. That’s the good news. The bad news is, if you want to break bread with Jim this Sunday, you’ll have to make your way to 83 rue de la Tombe Issoire in Paris. That’s where Jim lives. And hosts. Sunday Dinner is served at 8 p.m. Sharp.

Only in France, you say? Quel dommage.