In Praise of Fat 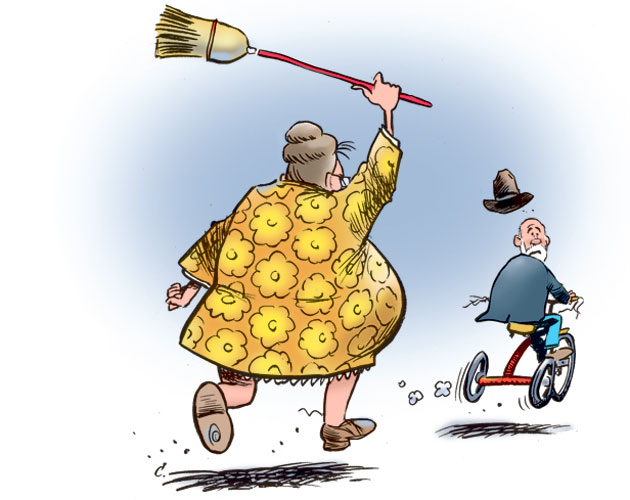 Here’s a heretical notion for you: Fat is Good. That’s not just a pudgy columnist thinking wishfully — I’ve got the Bard to back me up. Shakespeare figured out the upside of corporeal avoirdupois more than 400 years ago. “Let me have men about me that are fat,” he has the doomed Roman leader say near the beginning of Julius Caesar. “Yon Cassius has a lean and hungry look. He thinks too much; such men are dangerous.”

Good point. Lean Cassius went on to lead the stabbing posse that left Caesar’s aerated corpse sprawled on the steps of the Roman Senate. No surprise really. Most of your major historical bad guys were on the rangy side. Genghis Khan, by all accounts, was cowpoke lanky. Who wouldn’t be if they spent their days jouncing in a saddle, a-gallop across the steppes with just short breaks for raping and pillaging? Hitler was skinny; Pol Pot was a beanpole. True, Mussolini was a bit of a porker, but he yearned to be thin — he even wore girdles and platform army boots to try and look less rotund.

Contrast those with our earthly pantheon of roly-poly Good Guys: Santa Claus, Buddha, Falstaff, Peter Ustinov, John Candy. Lots of flesh but not a mean bone in the lot.

There was a time when it was meet to have meat on your bones. The “matronly” figure was something to which mature women aspired, while Victorian burghers of business strutted about like pouter pigeons, gold watch-chains draped over their ample paunches to emphasize their prosperity. Ironic that in our culture, when food has never been cheaper or more abundant, the physical ideal is the cadaverous silhouette of a Dickensian workhouse inmate.

Shakespeare continues to be about the last good press chubby folks have received. We know for certain we’re not beloved in Biloxi. A couple of years ago, Mississippi legislators introduced a bill to make it illegal to serve obese customers in all state-licensed restaurants. The bill wasn’t passed, but the hostile intent was obvious and the potential implications horrifying (“Hello, my name is Anthony. Let me just pass this tape measure around your middle to see if I’ll be your server tonight.”)

Great Britain? Maybe it’s a Henry VIII backlash, but human heavyweights get even less respect there. Recently, the London School of Hygiene and Tropical Medicine issued a report that fingers fatties for everything from rising gas prices to pressure on the world rice markets. The reasoning (I use the term loosely) goes approximately like this: overweight people eat more than regular people, therefore farmers have to grow more food for them, which has to be processed and distributed, which takes more fuel, which uses more oil, which drives the price of gasoline up while polluting our planet. Plus, overweight people drive their cars more than ordinary people because their feet hurt, thus threatening the collapse of civilization as we know it. (I may not have that last part exactly right.)

Hyperbole aside, the imputation is: fat people cause global warming. Can howling mobs with torches and pitchforks be far behind?

My mom could have solved all this nonsense with a flip of her apron. She had a three-letter mantra for all Life’s ills — Lost your job? Love life in the dumps? Can’t find your car keys? EAT!

True, it didn’t leave her with the profile of a Vogue model. More like a fire hydrant. Some might even whisper that she was, you know, a Woman of Substance. Fat? Perhaps, but she was fit. Fit enough to chase a 12-year-old down the street with a broom while six months pregnant. Would have caught me too if I hadn’t been on my bike.

Sir John Mortimer said it best. “I refuse to spend my life worrying about what I eat,” the British author harrumphed. “There’s no pleasure worth forgoing for an extra three years in the geriatric ward.”

I wish I’d had the opportunity to break bread with Sir John. He sounds downright jolly. I know he’d have been welcome at Mom’s dinner table.

Arthur Black is the author of 15 books of humour and A three-time winner of the Stephen Leacock Medal for Humour.