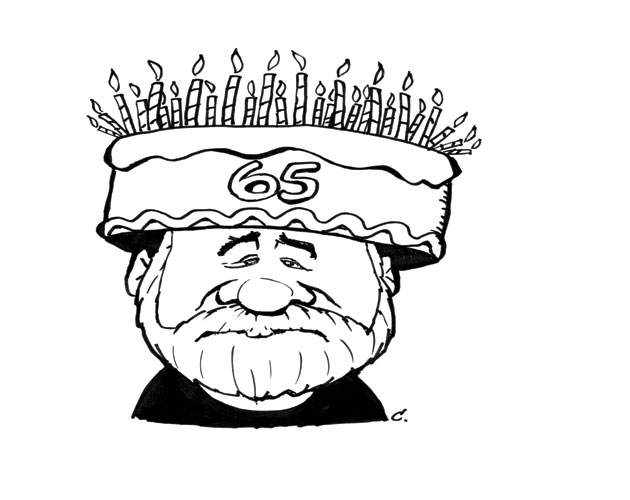 Arthur Black hates when he’s wearing the cake as a hat.

In 1893, two Kentucky school-teacher sisters, Patty and Mildred Hill, sat down and wrote a song. It didn’t take them long. They filched the melody from a popular tune of the day entitled “Good Morning to All.” The lyrics they made up consisted of a four-word phrase repeated three times, with one minor variation: you’ll know it when you hear it.

The Guinness Book of Records says it’s the most recognized song in the English language. Imagine how many millions of times that song has been sung with glee as a rule — but not always received with gratitude. I recall a muggy summer afternoon in a Swiss Chalet many decades ago, having dinner with my family. I still had the remnants of the chicken-and-ribs special on my chin when a chocolate cake studded with sparklers suddenly materialized in front of me.

I have never been a fan of the surprise birthday party. The only one I even half-envied was thrown for a prime minister of Great Britain back in the 1830s. A report in the Boston Globe summed up Lord Melbourne’s birthday surprise: “Lady Caroline Lamb, renowned for her flamboyant style, celebrated her husband by having herself served to him as a birthday banquet dish. On that occasion, she emerged naked from a large tureen.” A Swiss Chalet chocolate cake spewing molten metal filings? Not in the same league.

Most surprise birthday parties can’t justify the Cringe Factor for the poor sod on the receiving end. That’s why I was unimpressed when my sweetie announced plans to “do it” to our pal Dennice. She and I share the same month, so we get it all over with in one bash. But not this year, my mate informed me. “It’s a big one,” she explained. “Her 60th. We’re going to surprise her a couple of weeks early.”

“Wally won’t want any part of this,” I said. “Au contraire,” said my partner. Dennice’s husband was gung-ho for the Stealth Party. A hall had already been rented. “She’ll hate the fuss,” I warned. A four-piece band was hired. “She’ll freak when she finds out what this cost,” I groused. Invitations were mailed to more than 100 friends. “It’ll be a zoo.”

Besides, as I tried to explain to my partner, it just wouldn’t work as a surprise party. I mean, Wally is a nice guy, but Machiavelli he ain’t. Asking Wally to keep a secret of this magnitude would be like asking Don Cherry to show up in a Perry Como cardigan.

Besides, Dennice is hard to con. She’s a very intelligent woman. She’s alert and intuitive, and she can read Wally like a grade-school primer. Wally? He’d walk around whistling, wide-eyed, trying to look innocent. She’d smell a rat, give him the third-degree and have the details right down to the band’s playlist before Wally knew what hit him.

The big night arrived — another muggy summer evening. “It’s gonna be too damn hot,” I predicted. “Can we at least leave early?”

Right up to the door of the hall, I was forecasting disaster. “You think she’s not gonna recognize all her friends’ cars?” I scoffed. “What’ll Wally tell her — it’s a party for the fire department?”
“Relax,” said my partner.

We came through the door late. Dennice was standing right at the entrance, looking remarkably composed and in control. Incredible. She still hadn’t figured it out. I strode up to her, threw my arms wide and yelled ,“SURPRISE!”

She smiled back and said, “No, dummy — surprise YOU.”

It isn’t easy being this gullible.