The JFK Assassination In Snapshots 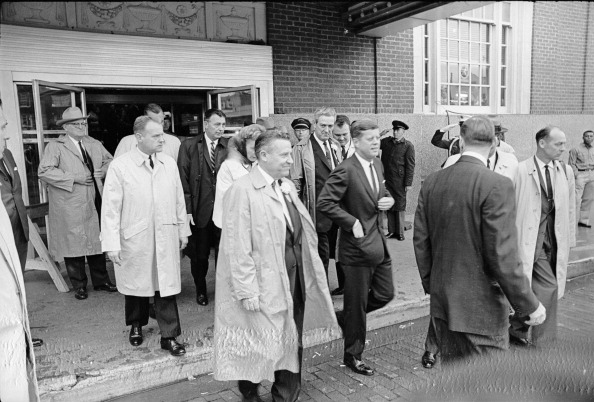 JFK and his wife Jackie ride in an open car motorcade through Dallas,Texas. American broadcast journalist and anchorman Walter Cronkite removes his glasses and prepares to announce the death of President John F. Kennedy to the world.

View of people as they cry and wait for news outside Parkland Hospital, where President John F Kennedy had been taken following his assassination, Dallas, Texas, November 22, 1963. A Navy ambulance, near Air Force One, waits for the body of slain President John Fitzgerald Kennedy, and US first lady Jacqueline Kennedy at Andrews Air Force Base, just outside Washington, DC. After Air Force One landed, the body of President Kennedy was taken to Bethesda Naval Hospital for an immediate autopsy. Flanked by Jackie Kennedy (R) and his wife Lady Bird Johnson (2ndL), U.S Vice President Lyndon Johnson (C) is administred the oath of office by Federal Judge Sarah Hughes (L) as he assumed the presidency of the U.S. A riderless horse, symbolic of a fallen hero, follows the caisson the body of President John F. Kennedy as the cortege moves towards the Capitol in Washington, D.C. on November 24, 1963. Robert Kennedy and Edward Kennedy with their sister-in-law, Jacqueline Kennedy, during the funeral of President John F Kennedy on November 25, 1963 in Washington DC, United States.