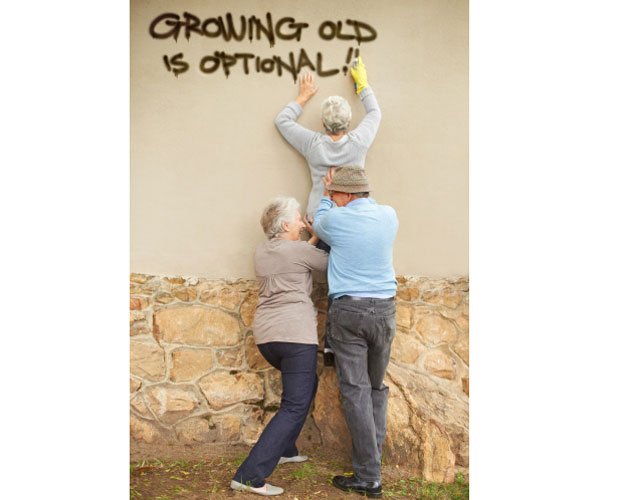 The French have, as the French so often do, the perfect phrase to describe it: Si jeunesse savait, si vieillesse pouvait  (If the young only knew; if the old only could).

Well, think about it. Can you imagine installing the smarts you’ve got and the tricks you’ve mastered into the lithe and supple body of a 20-year-old?

You’d be like a MacBook Pro laptop at the wheel of a Maserati.

That’s not going to happen, of course. Nobody’s figured out how to stop the clock, much less turn it back. Not that that we don’t dream about it. Twenty-five hundred years ago, the Greek historian Herodotus mused about a fountain of youth in the legendary African kingdom of Macrobia, whose inhabitants were rumoured to live extraordinarily long lives. He wrote of explorers who were led “to a fountain, wherein when they had washed, they found their flesh all glossy and sleek, as if they had bathed in oil – and a scent came from the spring like that of violets.”

Herodotus didn’t vouch for the veracity of the story, but he wrote: “If the account of this fountain be true, it would be their constant use of the water from it which makes them so long-lived.”

The fountain of youth yarn had legs. A millennium later, the 16th-century Spanish explorer Ponce de Leon churned up the sand on a beach near present-day St. Augustine, Fla., reportedly in search of miraculous anti-aging waters. Today, visitors to that city can pony up 11 bucks (10 dollars for seniors) and gain admission to – wait for it – the Fountain of Youth Archaeological Park, where you can drink from – wink, wink – the magical spring itself.

We’re not much more sophisticated today. We buy tonics and unguents, hair dyes and astringents, diet fads, exercise regimens and surgical procedures, all designed to lay a hip check on Father Time as he crosses our blue line. Speaking of which, Mr. Hockey himself, Gordie Howe, had a ready explanation for his career longevity. He explained that when he was a young hockey player, he used to chase the puck all over the ice. When he got older, he just skated to where he knew the puck was going to be.

An eloquent illustration of the old adage: age and guile trump youth and exuberance.

But we don’t tend to listen to wise observers like Gordie. We prefer to hope for a miracle. George Burns once went to his doctor, concerned because he was only managing to have sex about once a month. The doctor pointed out that wasn’t too bad considering he was 80 years old.

“But Groucho Marx is 85, and he says he has sex twice a week,” said George.

“So?” replied the doctor. “From now on, you say the same thing.”

The poet Yeats also fretted about a sagging libido. In 1934, when he was a mere 70, Yeats took his condition to Switzerland where he underwent a “rejuvenation procedure” – fancy talk for the surgical implantation of the sex glands of a goat.

“Did it work?” asked a friend.

“How do you know?” asked the friend.

“Why,” said Yeats, “I used to fall asleep after lunch.”

Winston Churchill died at 90, but he lived each day as if it might be his last. They called him “the most ambitious man in Britain.” He frequently fumed about how much he planned to do and how little time he had to do it.

“We are all worms,” he once grumbled, then added puckishly, “but I do believe that I am a glow-worm.”

Personally, I wouldn’t want to make time stand still. I’m not interested in being young and stupid and chasing the puck all over the ice again. Too much like the movie Groundhog Day.
All I’d really like is to just keep getting older.