Canadian Veterans: Who Has Their Backs? 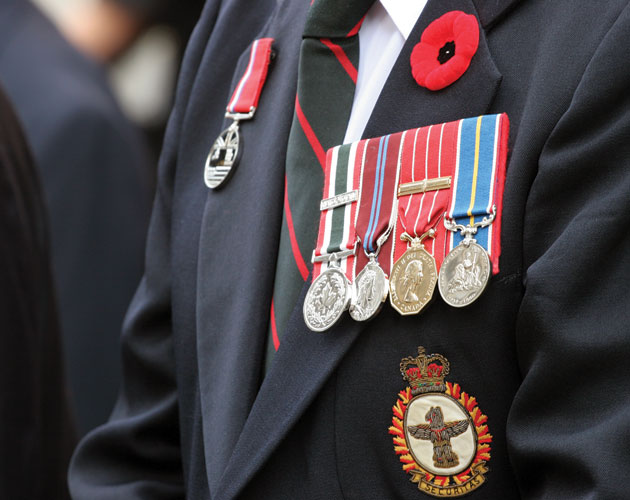 While the VA scandal simmers south of the border, Ottawa celebrates our vets, who still struggle for fair pensions and benefits

Roy Lamore is the kind of military veteran that you’d think would get a hero’s welcome on Parliament Hill. He’s a Second World War veteran from Thunder Bay, Ont., a chest covered in medals, but when he went to Ottawa in January, he was there to fight another battle. This one was for fair treatment of veterans.

He and his friends got to see Veterans Affairs Minister Julian Fantino for a few minutes but, in the end, called the session a “damn disgrace.” Ron Clarke, a 36-year veteran of the Canadian Forces, said the meeting was “unbelievable, unacceptable and shameful.”

Fantino should resign, Clarke said, and if he didn’t, he and many other veterans across the country would work to get rid of the entire Conservative government.

These vets used to be part of the backbone of Stephen Harper’s base. They thought they had a deal. They’d go overseas and put their lives on the line. If they got killed, we’d support their families. If they got seriously hurt, we’d make sure they always had a comfortable living. If they needed doctors or psychiatrists, physical therapy or job training, we’d make sure they got it.
Then, veterans claim, they found they didn’t have a deal after all.

And since the passing of a New Veterans Charter in 2007, the rules have changed. Veterans say they’ve been gouged and can expect to spend their retirement years in poverty. They’ve become much more militant. There are 700,000 of them, and they’re getting very good at embarrassing the government and building popular support.

Most of today’s vets are people who served after the Second World War. We’re losing thousands of Second World War soldiers, sailors and air force personnel every year, and the men who saw action on D-Day and at Hong Kong are in their late 80s, at least. But they’re still fighting, even though younger vets argue that their fathers and grandfathers got a better deal than the soldiers who went to Afghanistan.

Gordon Moore, who was Dominion president of the Royal Canadian Legion last year, says, “They like to have those veterans in the photos,” he said, “but you won’t see too many from after the Second World War and Korea.” Last winter, Moore wrote to the government, demanding money that’s earmarked for commemorations be paid to veterans instead.

The vets are angry about a law that was supposed to help them. All of the parties in the House of Commons backed the 2007 New Veterans Charter, but the vets say that piece of legislation, combined with changes to the disability payment system and cuts to Service Canada offices, have left them in worse shape. The system ties veterans in red tape and prevents them from getting the financial and medical help they need and deserve.

Some 89 per cent of the 700,000 veterans of the Canadian Forces get no help at all. Of the remaining 11 per cent, only two per cent receive lifetime pensions and medical help as Totally Permanently Incapacitated (TPI). To qualify as totally disabled, a soldier has to lose both legs above the knee or both arms above the elbow, suffer psychological damage that leaves the veteran bedridden or a combination of factors that make the veteran unable to work.

“It is beyond my comprehension how the system could knowingly deny so many of our veterans the rights and benefits that the people and the government of Canada recognized a long, long time ago as being their obligation to provide,” says Lt.-Col. Pat Stogran, Canada’s first veterans ombudsman, a respected combat veteran who suffered Post Traumatic Stress Disorder (PTSD) after fighting in the Balkans in the 1990s.

Here was the deal we had with the vets. During the First World War, Conservative Prime Minister Robert Borden promised them: “You need have no fear that the government and the country will fail to show just appreciation of your service to the country and that no man will have just cause to reproach the government for having broken faith with the men who won and the men who died.”

Borden was wrong. Veterans and their families had to fight for pensions and death benefits. Veterans often couldn’t afford medical care for what were often horrendous physical wounds. And treatment for the psychological wounds did not exist, which is one reason why so many vets spent their evenings at the Legion with buddies who understood.

After the First World War, vets organized the Legion and protested. The Liberal regime did a complete turnaround. In the last year of the Second World War, when it was clear veterans would support the politicians who offered them the best deal, Ottawa developed one of the world’s most generous veterans pension, medical and job programs, enshrined in the first Veterans Charter.

Veterans got health care, help with homes, educations, preferred hiring for government jobs and help finding work. But as the World War veterans passed away, so did their political clout. Legion membership has tumbled. Its magazine carries pages and pages of obituaries of members of the Greatest Generation. Within a decade, nearly all will be gone.

So, in this new political reality, the deal has changed. In 2005, under new rules passed by Paul Martin’s Liberal government, just as Canada was shipping troops to Afghanistan, soldiers who were disabled or killed are given a lump-sum payment instead of a lifetime pension, and these new rules also changed the way it calculated disability benefits.

Veterans groups say Canada’s payout of a maximum of $250,000 is too low. Britain and Australia pay nearly twice as much. Few people want to be blunt about it, but giving disabled young people one big payout is a recipe for many of them to end up destitute for the rest of their lives.

Moore, the former Legion president, says reservists get an even worse deal. The minimum payment for reservists injured or wounded in Afghanistan was $24,000, while a Canadian Forces private qualified for at least $40,000. “We need to look after these veterans. We need to fix the system and get it done now,” he says.

Then, one year later, a new government took over. Stephen Harper’s campaign platform had called for an even better deal for veterans and, in April 2007, the minority Conservative government passed the aforementioned Veterans Bill of Rights. Six months later, Stogran was hired as the veterans ombudsman. Only he didn’t behave as expected.

Stogran trashed the government that hired him, saying Ottawa was not living up to its obligations and promises. Veterans Affairs (VA) bureaucrats, he says, have a “penny-pinching insurance company mentality.”

But the government wouldn’t listen. “It became clear they weren’t going to co-operate,” Stogran said. “It was a waiting game for me to leave.” Stephen Harper refused to renew his contract, and Stogran was out on the street by November 2010.

Stogran continues to hammer the Harper government for its treatment of veterans, saying the bureaucrats at VA and in other government departments made it very difficult for him to do his job. In his 2012 report, auditor general Michael Ferguson backed Stogran, complaining Veterans Affairs’ red tape makes it “difficult to access services and benefits in a timely fashion.”
Several new veterans groups have started up in recent years, and some are at odds with each other. Basically, most of the groups representing veterans of the Gulf War, the Balkans conflict and Afghanistan tend to be more outspoken than the organizations representing older vets.

All groups, however, agree there are big flaws in the system: the government is tight with money, it doesn’t do enough to help vets get jobs and it has closed Veterans Affairs offices. It was that decision that brought Roy Lamore and his friends to Ottawa last winter to try to embarrass Fantino.

But the critics won’t go away, even when the Harper government fights dirty. Sean Bruyea is one of the more vocal critics of Veterans Affairs. He filed a lawsuit against the government in 2006, demanding a better pension deal for his PTSD. Three years later, 2009, Bruyea, an airman with 14 years of service, learned that his medical files had been passed around by bureaucrats, who’d had a good laugh at them.

Jean-Pierre Blackburn, then Veterans Affairs minister, apologized to Bruyea, but the government has made a very articulate enemy who has loudly attacked the system ever since.

The attack on Bruyea won him support from Gulf War and Afghanistan veterans. Respected military historian Jack Granatstein wrote in the Globe and Mail: “The Kafkaesque breaches of faith in VAC are a blot on the department’s record and a stain on the Canadian government. If the public’s confidence is to be restored, if veterans’ confidence in the department of government created to assist them is recreated, there must be an investigation with punishment for those who tried to smear opponents.”

(Stogran has also applied to the Privacy Commissioner to find out whether his Veterans Affairs file has been accessed hundreds of times. He believes the information may have been used improperly, just as Bruyea’s was.)

Bruyea says he believes veterans won’t get a fair shake until they stop being polite. One way, he says, is to put veterans’ issues front and centre as the government commemorates the centennial of the

“A big focus of the Conservatives is military commemoration. They get a big PR bang for a relatively little buck compared to what it costs to look after a veteran. Those commemoration plans are absolutely cynical,” he said.

Can Robert Borden’s promise to the veterans, made nearly 100 years ago, become the law of the land so that the soldiers who were wounded in the last 50 years get the same deal as their parents and grandparents?

Six veterans filed a class action lawsuit against the federal government in the British Columbia Supreme Court in 2012, saying the New Veterans Charter violates the Constitution and the Charter of Rights. All of them served in Afghanistan and were injured. The cornerstone of their lawsuit is the social contract that they claim exists between Canadians and the veterans. Federal lawyers denied any social contract or covenant can be found in this country’s laws.

“At no time in Canada’s history has any alleged ‘social contract’ or ‘social covenant’ having the attributes pleaded by the plaintiffs been given effect in any statute, regulations or as a constitutional principle, written or unwritten,” the government’s submission says.

When that came out, Fantino issued a statement saying, “Some have called the work done by Veterans Affairs to be a duty, a responsibility, a commitment, a social contract or a sacred obligation. I believe it is all those things … I have asked the parliamentary review to include consultations with Canadians, veterans and experts on exactly what our shared duty, responsibility, mandate, obligation, commitment or contract is with Canadian veterans and how that should be stated in the new Veterans Charter.”

This fall, says the Legion’s Moore, the government will have the report of the parliamentary committee that spent months studying the issue. They can revamp the system so that veterans don’t live in poverty, suffering from untreated physical and psychological injuries. Or they can risk a return visit by Roy Lamore and his friends.

“They can fix the problems now,” Moore says. “It’s what Canadians want and it’s the right thing to do.”