Remembering Elvis in his prime and seeing him today at 80 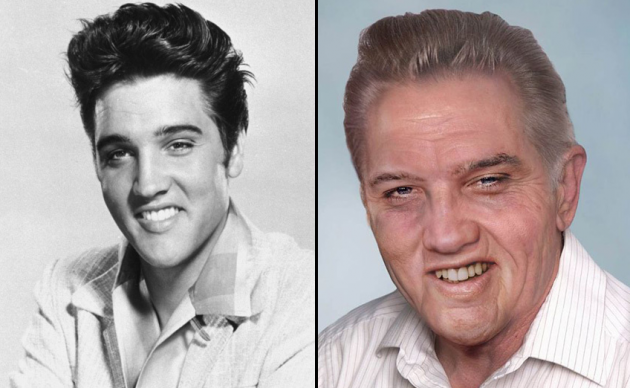 Transfixed as I am by the image of Elvis at 80, I truly wish I’d never seen it.
In the 1950s when Elvis was changing pop music forever, I was approaching puberty, and it seemed to me like he’d invented sex.
With a name that improbably and suggestively rhymed with pelvis, those thrusting moves, that flash of danger and sleaze and sultry smile, coal black pompadour and sideburns and knowing smirk, he seduced an entire generation of us girls. And plenty of mothers, too.
His guttural twang and velvet purr told us about desire and heartbreak and taught us how to move to the beat, even when the scrawny boys who asked us to dance to “Love Me Tender” were a different species altogether than the thrilling male animal we saw on the Ed Sullivan show or at the movies and listened to on records.
But it was never the boys we were dancing with anyhow. Always and only it was Elvis.
And so Elvis at 80 is someone I don’t even want to contemplate.
And it’s not just the wrinkles and white hair of an octogenarian that obliterate the beauty and magnetism of the man who electrified the stage in his 20s and 30s and died at 42.
An elderly Elvis could be a drug addict, a figure of ridicule or a dirty old man, even a pathetic has-been clinging to fame and singing at second-rate casinos. Worse, he could be a gun advocate or a right-wing reactionary.
Worst of all, he could have mellowed into a bland dotage, dispensing charity and speaking at motivational conferences.
That really would be the worst because, as Sammy Davis Jr. once observed, “There was something just bordering on rudeness about Elvis. He never actually did anything rude but he always seemed as if he was just going to.”
I want the Elvis I see in my mind still to be flirting with rudeness, the same man the New York Times described at a concert half a century ago:
“At 9:15, Elvis appeared, materialized, in a white suit of lights, shining with golden appliqués, the shirt front slashed to show his chest. Around his shoulders was a cape lined in a cloth of gold, its collar faced with scarlet. It was anything you wanted to call it, gaudy, vulgar, magnificent.”
Most of all, I want to remember Elvis when he was alive, and we were young.