Who Did It Best?: Trudeau Yoga 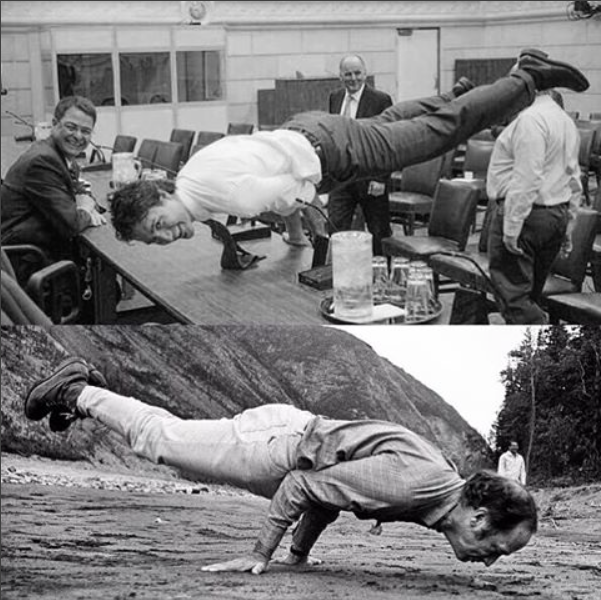 They call the yoga posture seen above the “peacock pose,” but we may as well dub it the “PM position” (or perhaps “Trudeau Taunt” for the balance-impaired among us). Whatever you call it, the image of Justin Trudeau holding this advanced yoga pose, taken in 2013, went viral yesterday, invoking pride in many a Canadian heart, envy in our Trump-enduring neighbours to the south and, I can only presume, a sudden flashback for the guy walking behind Trudeau who it appears narrowly missed getting kicked in the face by the future PM.

How’s this for a #tbt? #namaste From @cbcnews: The above photo of Prime Minister Justin Trudeau in peacock pose (which we turned black and white for effect) is trending on social media after a Toronto yoga teacher posted it to Facebook. The shot was taken in 2013 by freelancer Gregory Kolz (@gregkolz on Twitter). The shot below, by Canadian Press photographer Peter Bregg, is of former Prime Minister Pierre Trudeau, Justin’s father, in the same pose on the banks of the Nahanni River, in N.W.T., in 1970. Yoga, it would seem, runs in the family. #cbcnews #justintrudeau

Today, however, the image is drawing comparisons to a similar one taken of Trudeau’s father, Prime Minister Pierre Trudeau, who struck the same pose in 1970 near the Nahannie River in the Northwest Territories.

It’s difficult to judge who pulled off the pose best, as both Trudeaus demonstrate impeccable form and ease. Our current Prime Minister ups the ante by striking the pose on the edge of a table, which could tip at any time, thereby adding another element of balance into the equation. His father, however, was 51 when his photo was taken, a full nine years older than his son at the time of the second photo. If that’s not impressive enough, he’s got his nose just a few centimeters away from the river muck. Even gold prospectors a century earlier didn’t stick their face that close to the ground.

So who do you think did it better – Pierre Trudeau or his son Justin? Let us know by voting in the poll below.