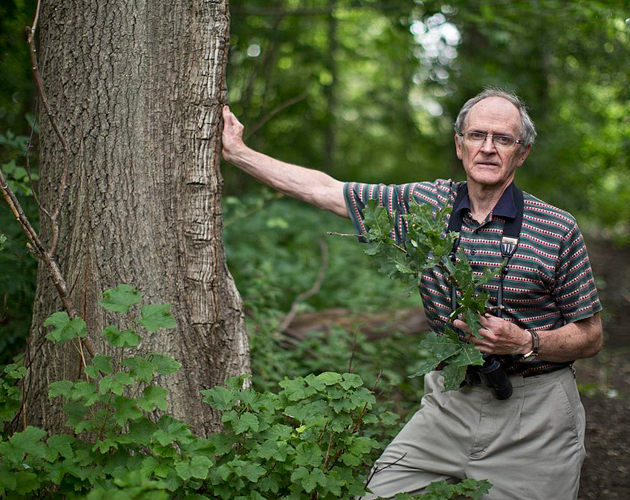 Standing on the battlefield of Vimy Ridge, Leslie Miller, a member of the Signal Corp during the First World War,  pocketed a handful of acorns to plant on his farm in Ontario. Unbeknownst to him, his actions would set off a sequence of events that would profoundly change the life of a fellow Canadian back home.

When 18-year-old soldier Leslie Miller gathered a handful of acorns on the battlefield of Vimy Ridge 100 years ago, he was likely just following his instincts as a farmer.

While stationed overseas in France, Miller was a soldier in the Signal Corps, but back home he was a farmer. Gathering those acorns in the aftermath of battle from a blasted-out oak tree and sending them home to be planted on his farm in Scarborough, Ont. was Miller’s personal way of commemorating his fallen comrades who had served in Canada’s historic battle. However, this small tribute would take on even more significance than Miller could have ever imagined.

Seventy-two-year-old Monty McDonald first came across the oak trees at the age of five. Intrigued by a roadside sign that read “Vimy Oaks,” McDonald’s father stopped in at the farm to inquire about the historic name. From there, Miller and McDonald’s father struck up a close friendship and, when McDonald was old enough, he began working on the farm during the summers.

Later, that chance encounter with the First World War veteran took on new significance when McDonald lost his father at the age of 16. Miller, who McDonald says shared his father’s love for academics and languages, stepped in and became his mentor.

McDonald recalls the French lessons he received, combined with physical labour on the farm—a teaching method he now affectionately calls, “French emersion farming.” But more than anything, McDonald says Miller taught him the value of hard work. “When you start working for him, you better do your utmost,” McDonald says. “That’s really a discipline he put in me. I’ve used it all my life.”

After Miller passed away at 90 in 1979, his impact on McDonald’s life would circle back to the Vimy Oak trees. While vacationing in France with his wife, McDonald visited the Canadian National Vimy Memorial to discover that not a single oak tree was left. From that initial disappointment came the idea to repatriate some of the oaks to Vimy Ridge and mark them with a small plaque. “That was my little dream just to honour him because he was like a grandfather to me,” McDonald says.

In addition to paying tribute to Miller for his mentorship, McDonald wanted to recognize the sacrifice he and others like him had made during the First World War. Even though they’d returned home, the Great War had taken its toll on many Canadian soldiers. Miller had returned from the war with scarlet fever, likely due to living in trenches for months at a time—an illness that would force him to withdraw from university, ending his dream of becoming a teacher.

“I look at him as an example of a lot that did come back and couldn’t do what they really wanted to do,” McDonald says.

With some assistance from the Vimy Foundation, the project went from bringing over a couple of trees to creating a large centennial park to be built beside the Vimy Ridge Monument. The project, however, would encounter its fair share of setbacks.

First, McDonald’s initial plan to harvest acorns the same way Miller had all those years ago hit a snag. Likely due to the severe ice storm of 2013, the nine trees produced only a dozen acorns.

The next best option was to graft the oak branches (called scions) to a new batch of saplings—coincidentally the descendants of an oak tree that was planted the same year Miller was born. However, this plan was thwarted, falling victim to heightened regulations in response to a deadly pathogen that was destroying trees in Europe. The roughly 200 grafted Vimy Oak descendants would not make their journey from Canada to France.

However, McDonald had anticipated this roadblock and had already sent hundreds of acorns produced by the grafted Vimy Oaks to a nursery in Paris.

And, much like Miller had taught him, McDonald had given the project his all.

This year, his vision will finally be realized with the opening of the Vimy Foundation Centennial Park on Nov. 9. The descendants of the original oaks are an integral part of the 1.6 hectare park, where shady pathways offer a direct view of the neighbouring Vimy monument.

“I think of the trees as their spirits standing on guard,” he says. “Of course it will do something for Leslie too, but it’s for all of them.”