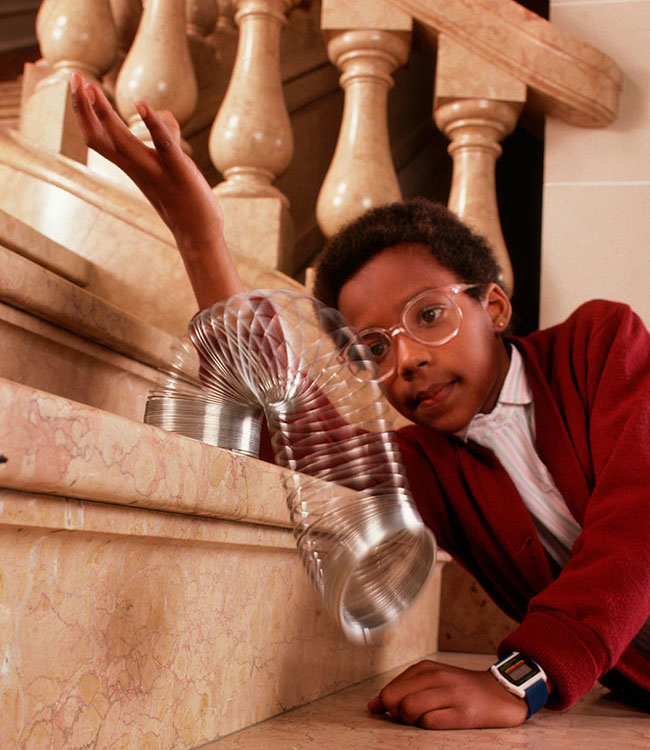 Mechanical engineer Richard James wasn’t intending on making a toy when he stumbled upon the invention that later became the Slinky. Photo: Roger Ressmeyer/Corbis/VCG/Getty Images

While some toys only enjoy a brief flash of success, these five classics have never lost their appeal.

For as long as toys have existed, kids have moved from one fad to the next. The obsession with fidget spinners in recent years, for example, brings back memories of the pet rock — just an ordinary rock marketed as a live pet that briefly became a craze in 1975, making its inventor a millionaire practically overnight.

Yet, for all the toy fads that have come and gone over the years, there are also those with an unlimited shelf life that remain successful despite an attention span that seems to shorten with each new generation.

Here are five toys that never seem to get old — and the stories behind their creation.

The story behind the Teddy Bear dates back to 1902, when U.S. President Theodore (Teddy) Roosevelt went on a hunting excursion at the invitation of the Mississippi Governor.

The intended game were black bears, but after days of hunting Roosevelt hadn’t encountered any.

Fearing the president’s disappointment, the guides decided to take matters into their own hands. Using hunting dogs, they trailed a bear to the point of exhaustion, thumped it over the head with a rifle and tied it to a tree.

When Roosevelt was asked to deliver the fatal shot, he refused the unsportsmanlike kill and ordered the men to end the bear’s suffering.

When an illustration of the incident appeared in a political cartoon by Clifford Berryman in the Washington Post, New York candy shop owners Rose and Morris Michtom were inspired to create a stuffed bear, which they displayed in their shop window accompanied by a sign that read “Teddy’s bear.”

As for the president, he later adopted the Teddy Bear as the symbol for the Republican Party and had Michtom’s bears displayed at every public White House function.

The first slinky to ever slink wasn’t actually a slinky at all. In fact, mechanical engineer Richard James wasn’t intending on making a toy when he stumbled upon the invention.

While developing mechanisms to steady sensitive equipment at sea as part of the war effort in 1942, he knocked a tension spring off a shelf and was amazed at how it gracefully walked down to the floor.

Convinced that it could be the next big novelty toy, James spent the next two years experimenting with various designs.

Once it was perfected, his wife, Betty, came up with the name Slinky after combing the dictionary for a word to describe the spring’s fluid motion.

With a marketable name and working design, the pair borrowed $500 to manufacture the first Slinkys. However, selling their unassuming steel spring based on its look alone proved difficult.

It would take a demonstration from the inventor himself at a Gimbels department store in 1945 for the public to realize the potential of the slinky. On the day of his first demonstration, he sold more than 400 Slinkys (for $1 each) in just 90 minutes.

Responding to a growing demand for his toy after the war, James developed a machine that could coil the 80 feet of wire necessary to make a Slinky in just 10 seconds and patented the technology in 1946.

By the 1950s, the Slinky had become a national phenomenon and gained even more traction when a catchy jingle was created for the product’s television advertisements.

At the end of the 20th century, 250 million Slinkys had been sold.

The origins of the Yo-Yo are difficult to pinpoint, but historians have agreed on one important fact: they’re ancient.

It’s widely believed that the toy originated in China circa 1000 BC, but ancient paintings and artifacts suggest they were used in Greece as far back as 500 BC.

However, the toy’s mainstream success came in 1929 when Pedro Flores made an important, yet seemingly simplistic, adaptation to its design. Rather than an ordinary knot, Flores used what’s known as a looped slip-string, which allowed users to sleep their Yo-Yo at full extension.

With his new model, Flores began selling Yo-Yos to children around Los Angeles and later secured financing to open a factory to manufacture the toy. Within a year, Flores’ company was producing more than 300,000 units a day to keep up with the demand.

It was then that he caught the attention of self-educated businessman Donald Duncan at one of his Yo-Yo demonstrations in a San Francisco hotel. Convinced he could expand on the Yo-Yo’s success, Duncan purchased the Yo-Yo Company and began promoting the product with a series of Yo-Yo competitions.

Today, this ancient toy is re-marketed every five years to ensure it never shows its age.

Erno Rubik, the architect after whom the Rubik’s Cube is named, never intended on creating a puzzle when he assembled the original prototype in 1974.

Instead, he was searching for a way to demonstrate 3-D movement to his students at the Academy of Applied Arts in Budapest where he taught design. The first cube was made from wood, rubber bands and paper clips and only included those all-important primary colours out of necessity.

“I needed some sort of coding to bring sense to the rotations of the cube, so I used the simplest and strongest solution: primary colours,” he wrote in a personal account published by the Guardian.

It wasn’t until after he put the stickers on each side that he realized he had created more than just a teaching tool.

“It was wonderful to see how, after only a few turns, the colours became mixed, apparently in random fashion,” Rubik wrote in an unpublished memoir quoted in Discover magazine. “It was tremendously satisfying to watch this colour parade. Like after a nice walk when you have seen many lovely sights you decide to go home, after a while I decided it was time to go home, let us put the cubes back in order. And it was at that moment that I came face to face with the big challenge: What is the way home?”

After taking a month to solve his puzzle, Erno knew he had something special and set out to manufacture and sell his product, which he decided to call the Magic Cube. But with imports and exports tightly controlled in his home in Hungary, which was under Communist control at the time, his product received only limited exposure at first.

Enter businessman and amateur mathematician, Tibor Laczi, who was intrigued with the toy after watching a waiter play with it at a café in Hungary.
The following day, he asked for permission from a state trading company to begin selling the Magic Cube in the West and began demonstrating it at various toy fairs around the world.

At the Nuremberg fair, British toy expert Tom Kremer took an interest in the cube and arranged for the rights to be licensed to the Ideal Toy Company.
The next challenge in taking on the toy was marketing. Since Rubik had missed the deadline for an international patent within a year of his original patent, the Ideal Toy Company decided they needed a recognizable name to copyright and differentiate the toy from potential knockoffs.

The company launched the Rubik’s cube internationally in 1980 and sold more than 100 million cubes within the first two years.

The Frisbee as we know it today made its first appearance when the popular toy company Wham-O rolled out its first batch of the plastic aerodynamic discs in 1957.

However, the original idea came about much earlier when 17-year-old Walter Fredrick Morrison discovered the flight capabilities of a popcorn tin lid in his California backyard in 1937.

The commercial potential of the makeshift toy was first realized  when Morrison switched out the tin lid for one of his mother’s pie tins, which was much more durable. As he and his girlfriend tossed the tin back and forth at the beach one day, a passerby offered to purchase it for a quarter, 20 cents more than what they had paid for it.

Soon after, the pair began selling their Flyin’ Cake Pans and earned enough money to marry and settle down.

In the Second World War, Morrison flew P-47 fighter-bombers in Europe, expanding his knowledge of aerodynamics beyond the flight of pie tins.

Returning to Las Angeles after the war, he began refining the design of his flying disc in his off-hours as a carpenter.

In 1948, he and business partner, Warren Franscioni, manufactured the Flyin-Saucer, the first plastic flying disc. Though, with the product achieving little success, the two men parted ways, leading Morrison to create yet another version of the flying disc in 1955.

He sold the improved design as the Pluto Platter to Wham-O, where the company’s head of research and development, Ed Headrick, made improvements to its aerodynamics, resulting in the modern Frisbee design.

As for the renaming of the product, the toy’s tinny origins would rear its head one final time.

On a visit to Connecticut, Wham-O founders Richard Knerr and Arthur (Spud) Melin noticed a number of students on Yale campus playing catch with pie tins from the popular pie company, Frisbie’s Pies.

Even more significant was how the name Frisbie had become synonymous with the object itself as students often yelled “Frisbie” at the sight of an incoming tin.

Struck by this encounter, the pair officially changed the name of the product to Frisbee in 1958, altering the spelling slightly to avoid copyright infringement.

While Morrison initially called the renaming of his product “a horror,” the inventor would come around to the name after its major success, telling Forbes,“I wouldn’t change the name of it for the world.”

Under Wham-O, the Frisbee went on to sell more than 100 million units by 1977 and is still produced by at least 60 manufacturers today.

11 Popular Toys We Were Obsessed With As Kids

6 Tech Toys to Help You Spring Into the Season

Classic Toys In Their Later Years