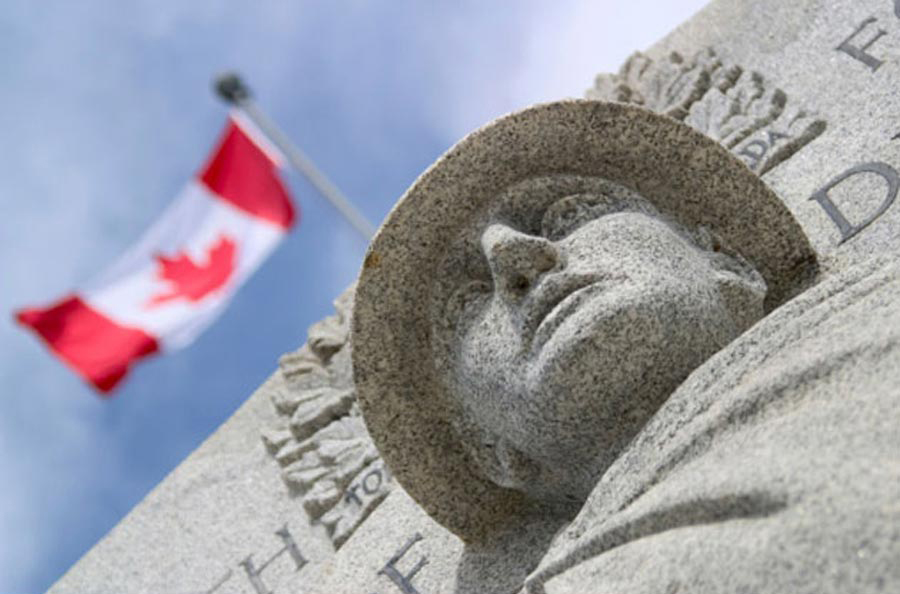 To mark the 75th anniversary of D-Day, read our interview with Canadian Lt. Don Kerr about his experiences during the Second World War and his later involvement in setting up a museum in Normandy for Canadian veterans. Kerr died of cancer in 2012, at the age of 90.

It was a day like no other. The first thing that Don Kerr remembers about D-Day was the eerie quiet of his nighttime Channel crossing. No bombardment. No gunfire. Just the sound of his landing craft pounding through rolling surf toward the coast of France. But about 4 a.m. on June 6, 1944, when Allied air and naval forces began shelling the German defences along the landing beaches of Normandy, the noise rattled him and he felt fear rising inside.

“You’re scared stiff,” Kerr says, recalling the terrifying experience more than a half century later. “You’re 21 years old, and you see billions of dollars worth of armaments around you, a sky full of airplanes, ack-ack fire and shells falling everywhere. Your life is flashing in front of you.”

When he came ashore on Gold Beach at about 8 o’clock that morning of June 6, Lt. Don Kerr and about 15,000 other Canadian citizen soldiers entered the annals of modern warfare. That D-Day, they joined the greatest amphibious invasion in military history.

But like so many who survived, Kerr’s memory is selective, shutting out some impressions, coping with others. His orders were to get his motorcycle, signals equipment and 12-man crew ashore and to establish a communications link between the beach and the first beachhead headquarters. He was to stop at nothing.

“We’re scrambling up the beach,” Kerr recalls, “and a British captain at the wheel of a Jeep had taken a bullet from a sniper through the head. I just gently lifted him out of the Jeep and laid him on the beach. Then I put my Norton [motorcycle] in the back of the Jeep and drove off.”

A stirring tribute to those who fought in the Second World War, through the eyes of survivors.

Lise Cooper was another survivor of the Second World War.  A teenager at the time, she had served on Canada’s home front, knitting socks and collecting used items and selling them to raise money for the Red Cross.

After the war, she married a D-Day veteran (the late George Cooper of the 14th Field Regiment) and together they regularly made pilgrimages to European sites liberated by Canadians in 1944-45, including Normandy.

One such trip in 1994 initiated a travel exchange between European and Canadian children.

“But what were we going to show the Canadian children in Normandy?” Lise Cooper wondered. “A beautiful sandy beach, markers and a street called Liberation Street. But what else? We have Vimy [to mark] the First World War. We have nothing for the Second World War. I think the Juno Beach Centre was born in that moment.”

Cooper and two D-Day vets, Garth Webb and Don Jamieson, formed the non-profit Juno Beach Centre Association in 1995 to establish a museum in Normandy for all Canadian veterans of the Second World War. At first, the group planned on renting an existing building to house the museum, perhaps the famous Tudor-style house that greeted Canadian troops as they landed at Bernières-sur-Mer on D-Day. When Bernières fell through, it was replaced by a land donation a few kilometres away in Courseulles-sur-Mer (also part of Juno Beach). Don Cooper, Lise’s son, became project manager.

“Courseulles from a commercial and visitor’s point of view was a step up for us, and we wanted to put up a facility that suited this great site,” says Cooper. He worked together with Canadian architect Brian Chamberlain to design the museum.

Cooper and his team worked with exhibit specialists to create five display areas illustrating Canada’s worldwide role in the Second World War, partly to dispel what he calls “a Steven Spielberg orientation — the notion young French people have that the Americans won the war.” Two more display areas were planned to help showcase Canadian life, culture and people today.

As the project grew, however, so did the overall price tag: $10 million.

Raising awareness and funds became a top priority. The Juno Beach Centre Association members canvassed every level of government and corporate boardroom, “expecting the Molsons and Air Canadas to open their wallets.” It was a tougher sell than they expected. They constructed a website and invited Canadians to purchase bricks (from $250 for individuals to $2,500 for corporations), each inscribed with a veteran’s name, to be incorporated into a series of outdoor kiosks. The donations began to flow.

“The responses in the mail made me cry,” Lise Cooper says. “We’d receive a $10 cheque from someone in Newfoundland or B.C. and a note saying: ‘I lost my brother there’ or ‘Bless you for doing this. It’s something that should have been done ages ago.'”

In addition to the 11,000 Canadians (and some Americans) who purchased commemorative bricks, the association suddenly received a boost from Mario Pilozzi, the first Canadian CEO at Wal-Mart Canada.  Wal-Mart agreed to raise $1.5 million for the Centre and invited Canadian veterans into their 213 retail stores across the country to promote and sell commemorative bricks. Wal-Mart contributed another $2 million worth of publicity, including television ads shot on location in Normandy.

The campaign also attracted a veteran who had all but erased D-Day from his memory: Don Kerr. Until Garth Webb invited him to join the Juno Beach Centre board of directors, Kerr, who had gone on to work in communications, real estate and as a Toronto alderman, had successfully been able to shut the war out of his mind

“I didn’t even go to see Saving Private Ryan. I didn’t think I could handle it. My daughter saw it. She started to tell me about it, and I started to shake and cry. That’s why I never went back [to Normandy], I guess,” says Kerr.

As the Juno Beach museum began to take final shape on the beach at Courseulles-sur-Mer last spring, the association’s fund was building too: from Veterans Affairs Canada, $2 million; from various levels of government in France, more than $2 million; from Ontario and B.C., $1 million each; from other provinces, nearly $200,000; and from 11,000 individual Canadians and corporations, $3.5 million.

Confronting ghosts of the past

The only part of the puzzle missing for Don Kerr was his decision to go.

“I fought with it,” he says. “I thought I would get too emotional when I got to Normandy. But I sat back and said, ‘So, you’re going to get emotional. So what? It’s part of life.’

D-Day for the Juno Beach Centre, like the wartime event it was commemorating, June 6, 2003, presented numerous challenges.

Centre director Nathalie Worthington juggled staff assignments, tour guides, souvenir shop supplies and media requests right down to the wire. Board director Ted Davie handled the logistics for the centre’s two-hour opening ceremonies: CBC TV coverage, arrival and departure of dignitaries (Canadian and French Prime Ministers Jean Chrétien and Jean-Pierre Raffarin), wreath laying, veterans’ parade and various aerial events (including the arrival of a team of skydivers, a display of aerobatics by a vintage RAF Spitfire and the drop of 43,000 poppies in honour of Canada’s Second World War dead).

Project manager Don Cooper coped with his share of snafus. The centre’s air conditioning system didn’t work on opening day. At the last minute, French public service groups announced they would picket the event over a pension dispute with the French government; consequently, the local gendarmerie demanded the centre staff erect restraining fences around the facility and increase its admission security. And, to top everything off, the symbolic poppy drop presented its own unique challenge.

“Veterans Affairs had offered us the poppies,” Don Cooper says, “because they had thousands of old ones with green centres left over from Remembrance Day. The problem was we thought we might kill somebody with all those pins coming down. So we had army cadets remove all the pins the day before the event.”

Another day to remember

Nevertheless, like D-Day 1944, the Juno Beach Centre launch was a success. About 4,000 people jammed the benches in the bright sunlight of a Normandy afternoon. The two prime ministers, the Ontario premier and the mayor of Courseulles all arrived on time. The ribbon-cutting ceremony at the museum entrance and the unveiling of Ontario artist Colin Gibson’s sculpture, Remembrance and Renewal, went perfectly. And when it was their turn to speak, Lise Cooper and Garth Webb brimmed with pride.

When Webb invited the veterans to join him in a final veterans’ march-past, the square in front of the centre quickly grew congested with many old soldiers who had stormed those same beaches half a lifetime before. With medals and ribbons, bodies proudly upright and marching steps that connected them to their youth, 1,000 veterans paraded past the entrance to their new Juno Beach Centre.

Among them, 82-year-old former signaller Don Kerr stiffened like the discipline-loving cadet he’d been at school in 1939.

“I shed some tears at the Beny-sur-Mer cemetery [just up from Juno Beach],” he admits, describing his emotions. “There are 440 graves there, 340 of which were the first wave on the beach on D-Day. I also got a little teary-eyed at some of the pictures in the museum and during the poppy drop in the ceremony.”

For the rest of his D-Day anniversary, Kerr kept his emotions in check. But as is often the case, it was an unexpected incident that caught him off guard. When a parking attendant outside his hotel in Arromanches found out Kerr was a D-Day vet, he ran after him and returned his money. “Veterans don’t pay,” the attendant said. “We can never repay you. Thank you.”

It made Kerr and many like him proud and emotional to be a Canadian in Normandy on D-Day.

This article was originally published on Jan. 1, 2006