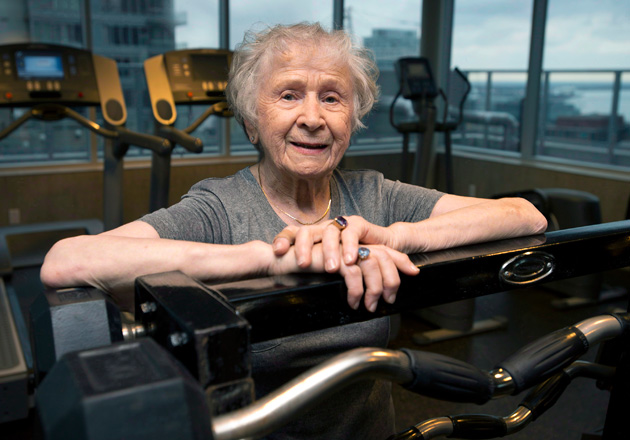 Olga Kotelko hadn’t yet retired from a stellar career in athletics when she passed away unexpectedly this week. At 95, the petite track star had been contemplating adding pole vault to the 11 track and field events she has been pursuing since she began running, jumping and throwing in earnest at the age of 77.

Her birthday on March 2nd pushed her into a new category in Masters competition, opening up another opportunity to attach more world records to her name. (Beginning at age 35, Masters athletes compete in five-year age categories.) She regretted the lack of competitors at her level since she enjoyed pushing herself to do better each time she competed. Often she had to run against younger women or even men.

So unusual was her prowess that scientists asked if she would agree to be tested. A retired teacher always interested in learning, she readily agreed. Olga’s muscle tissue, it seems, was much like that of a 50- or 60-year-old and her brain, too, belied her age.

Writer Bruce Grierson documented her extraordinary life as an elder athlete in What Makes Olga Run? (Random House Canada). Her own book, Olga: The OK Way to a Healthy, Happy Life (www.friesenpress.com), written with Roxanne Davies, was published this past spring.

Her aim, she told an interviewer in January, was to live to 120. She might have, too, but for the sudden, treacherous rupture of a major blood vessel in her brain on Saturday. Although she died on Tuesday, Grierson told the editor of masterstrack.com that doctors said she would have lost consciousness instantly and not suffered.

Her loss will be noted by Masters athletes around the world, by 30 years of students who loved her dearly and by this senior editor of Zoomer magazine, who interviewed her twice and ever since has powered through tough moments with the thought that it’s just what Olga would do. And now, of course, I’ve got to keep going. Olga would have, too, if that one sudden surge hadn’t claimed her.