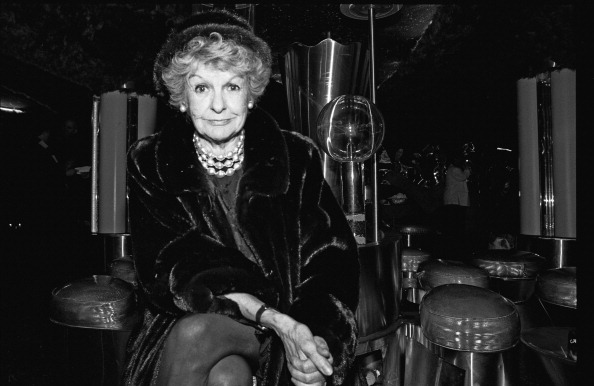 The lights of the Great White Way will dim this evening in honour of Elaine Stritch, heralded as the First Lady of Broadway, who died yesterday at her Michigan home at age 89 following a reported illness.

Stritch, a Tony- and Emmy-winning performer whose career launched in the mid-1940s, is best remembered for her collaborations with theatre composer Stephen Sondheim, whose “The Ladies Who Lunch” (from the musical Company) was written for Stritch. She also made an indelible mark on London’s famed West End theatre scene and most recently appeared as Colleen, the tough-talking mother of Alec Baldwin’s character Jack Donaghy, on the hit NBC show 30 Rock (for which she won an Emmy award in 2008).

Baldwin joined a number of celebrities who tweeted in memory of Stritch following news of her death:

“A woman that I loved and admired, and a true one in a million, has gone to her rest … I’m sure that even God is a bit nervous right now. I love you, Elaine.”

Born in Detroit, Mich., Stritch learned her craft alongside other greats including Bea Arthur and Marlon Brando at The New School’s Dramatic Workshop in New York before landing her first role on Broadway just two years after making her professional debut. For eight years, beginning at age 80, she famously lived in New York’s Carlyle Hotel, where she also performed musical numbers and told stories about her life.

Of Stritch’s five Tony nominations, which spanned the 1950s through the 2000s and included best actress nods in a 1962 production of Noël Coward’s Sail Away, 1971s Company and a 1996 production of Edward Albee’s A Delicate Balance, it was her final nomination – for her 2002 one-woman show Elaine Stritch at Liberty – that won her the honour (for Best Special Theatrical Event). A documentary based on the show won an Emmy Award two years later.

In 1995, she received an induction into the American Theatre Hall of Fame.