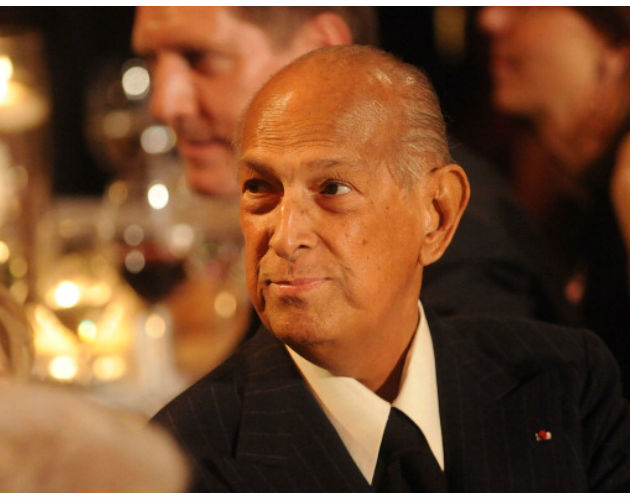 Renowned fashion designer, Oscar de la Renta, has died at the age of 82. The cause of death was confirmed by his wife as complications from cancer.

For decades his gowns were worn by some of the most esteemed and affluent women of the world including royalty, celebrities, and socialites. In the 1980s, he dressed U.S. First Lady Nancy Reagan and went on to provide inaugural gowns for Hillary Clinton and Laura Bush.

At a recent retrospective exhibit of his designs, Clinton praised the designer saying, “His name alone evokes elegance and timeless beauty. And his designs give each of us a chance to feel like we’re special, too.”

However, despite the chorus of praises he received throughout his lengthy career, the designer did have one famous detractor: current First Lady Michelle Obama. For several years Mrs. Obama eschewed his garments after he publicly criticized her for wearing a J. Crew cardigan over an Isabel Toledo-designed dress while meeting with the Queen of England in 2009 (he was quoted in Women’s Wear Daily as saying that you don’t “go to Buckingham Palace in a sweater”).

But, there was a dramatic turning point in this unspoken riff: just this month Mrs. Obama wore his label, for the first time, to a cocktail party after her White House Fashion Education Workshop. It was a telling move as Mrs. Obama is well aware of how her style is received and dissected in the public discourse, and her decision to wear his dress at an event filled with fashion elite was (seemingly) an attempt to make amends with the iconic designer.

Born in Santo Domingo, Dominican Republic, de la Renta studied painting in Spain and apprenticed with Cristobal Balenciaga before moving to Paris to work at Lanvin and Balmain. In the 1960s he moved to New York, acquired his citizenship, and worked with Elizabeth Arden before launching his ready-to-wear label.

He also held the distinction of being the first American to become the top designer of a French fashion house after taking over the reins at Paris-based Balmain from 1993 to 2002.

His accolades include the American fashion industry’s Coty Award in 1967 and 1968, and a lifetime achievement award from the Council of Fashion Designers of America in 1990.

He is survived by his wife Annette de la Renta and adopted son, Moises.

“Style begins by looking good naked,” he said in a 2013 interview with the U.K.’s Telegraph newspaper. “It’s a discipline. And if you don’t dress well every day, you lose the habit. It’s not about what you wear, but how you live your life.”