Pat Quinn Passes Away at Age 71 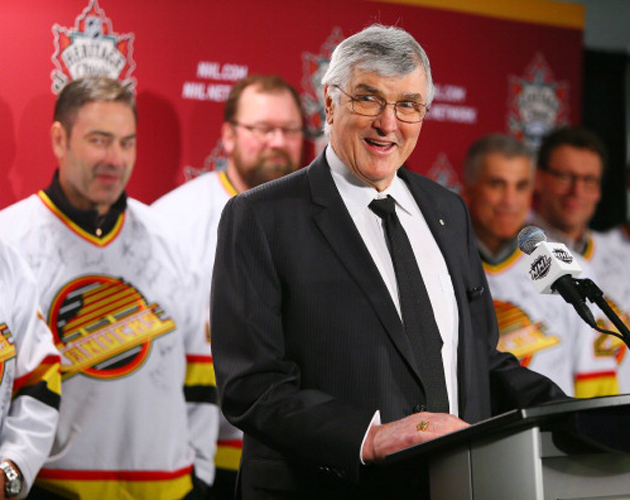 Pat Quinn, NHL player, coach, general manager and hockey lifer, has passed away at the age of 71.

“Pat was an inspiration to all of us,” said Ron Toigo, who, along with Quinn, co-owned the Vancouver Giants junior hockey team. “He always said that respect was something that should be earned, not given, and the respect that he garnered throughout the hockey world speaks for itself. He will be sorely missed.”

From his earliest days playing hockey in his hometown Hamilton, Quinn spent his whole life in arenas – small and large – across Canada. The sport was in his blood and he could never shake it. “I can’t picture myself retiring,” he told me in a 2006 interview, right after he had to step aside from coaching, due to a major health scare with arrhythmia. “I don’t want to spend all my time on the golf course and I don’t have a lot of hobbies. I still love my job and I’m not ready to step away.” He never did step away, and was still involved with hockey, right up to his death.

After a career spent as a bruising defenceman for the Toronto Maple Leafs, Vancouver Canucks and Atlanta Flames, Quinn became a successful coach, with Philadelphia, Vancouver (where he was also general manager), Edmonton and Toronto. He also coached the 2002 Canadian team to victory at the Salt Lake Olympics, winning the country’s first gold in 50 years.

Yet in spite of all his later successes as a coach and GM, Quinn could never escape the controversy over an incident that happened while he was still playing. In April, 1969,  the big defenceman threw an ugly hit against Bobby Orr, the great Bruins star. Orr sustained a concussion from the collision and Quinn became a villain, especially in Boston.

But was it a dirty hit? Whenever asked, Quinn always maintained the hit was legal, albeit with a mischievous twinkle in his eye. “You’re going to go to your grave with that, aren’t you?” asks the commentator in the video below. “Yeah,” says the old player, chuckling.

And so he did. Rest in peace, Pat Quinn.