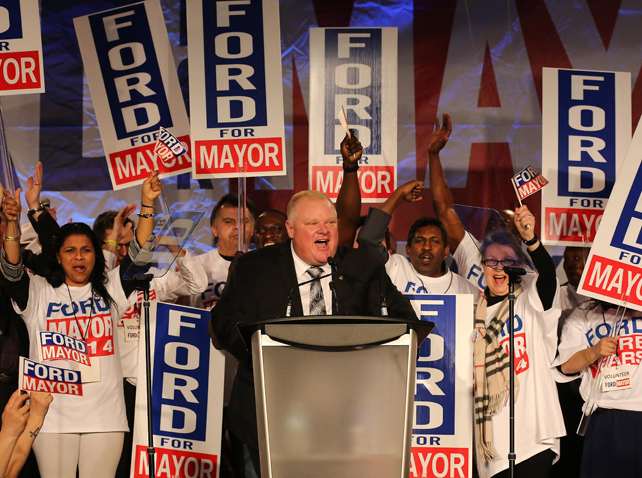 Rob Ford, former mayor of Toronto and one of the most famous, and infamous, city politicians in history, has died. He was 46. Ford passed away today after battling pleomorphic liposarcoma, a rare soft-tissue cancer. A statement from the Ford family called him a “dedicated man of the people” who “spent his life serving the citizens of Toronto.”

Best known for his much publicized and embattled term as Mayor of Toronto from 2010-2014, Ford’s time in the city’s highest office was bookended by stints as city counsellor for North Etobicoke’s Ward 2 from 2000-2010, and again from 2015 until his passing, where he honed a reputation for returning constituents phone calls and even showing up at their homes to discuss their concerns.

Ford was perhaps the most famous face of a family entrenched in local Toronto politics. His father, Doug Ford Sr., served as a MPP for the Progressive Conservatives, representing the Etobicoke-Humber riding, from 1995-1999. His older brother, Doug Ford Jr., who’s had his own eye on provincial politics, served as Ward 2 councillor during Rob Ford’s time as mayor. And Ford’s nephew, Michael Ford, who abdicated his position as contender for the Ward 2 seat in 2014 in favour of his uncle Rob, who’d ceased his mayoral re-election bid due to his battle with cancer and instead ran for his old council seat, is now a local school board trustee.

Rob Ford was born May 28, 1969 in Etobicoke to Doug and Ruth Ford. From a young age he dreamed of playing professional football, but despite attending various camps and making the team at Ottawa’s Carleton University, his football ambitions dwindled and he dropped out of school after one year. He went to work at his father’s company Deco Labels until 2000, when he successfully ran for the Ward 2 city council seat (he’d run unsuccessfully in the previous election). That was also the year he married his wife, Renata Brejniak, with whom he has two children.

As a city councillor, Ford became known for giving out his personal phone number to constituents and showing up personally to people’s homes to discuss problems within his ward. Although brash and divisive at city hall – often fighting with fellow councillors over everything from budget expenses to bike lanes – Ford cultivated a reputation among locals as a hands-on “man of the people” who, unlike other councillors, refused to use taxpayer money for personal or office expenses.

Ford entered the 2010 mayoral race as a long shot but his everyman persona and catchphrases, such as his promise to end the “gravy train” at city hall, tapped into real frustrations that many citizens harboured over the way the city was being run. Initially dismissed as a fringe candidate, Ford beat rival George Smitherman to win the mayoralty.

Is most high-profile position also proved to be his most tumultuous, yielding everything from revelations about his drinking and drug abuse to gang associations to offensive language to reckless behaviour, a conflict of interest trial, rehab and city council stripping him of most of his mayoral powers.

For better or worse, Ford became an international celebrity, making news south of the border and even appearing on the late night talk show Jimmy Kimmel Live, where he was seemingly unaware he was being mocked.

Despite the bad press, tarnished reputation and division over his tenure at city hall, Ford announced that he would run for re-election in the 2014 mayoral campaign. However, his cancer diagnosis – a rare pleomorphic liposarcoma in his abdomen – required chemotherapy and treatment that forced him to abandon his mayoral bid. His brother, Doug Ford, ran in his place while Rob ran for, and ultimately won, his old Ward 2 seat. In May of last year Ford underwent successful surgery to remove the tumour, but in October he announced that the cancer had returned and spread to his bladder. Chemotherapy didn’t help shrink the tumours and Ford agreed to take part in a trial program in which parts of a patient’s tumour are implanted in mice, which are then targeted with different treatments to see which works best on that specific tumour. In the meantime, thousands of citizens joined fellow city councillors – including Toronto Mayor John Tory and long time political enemies of Ford – in extending their prayers and well-wishes to him.

Ford is survived by his wife, Renata, his children Doug and Stephanie, his mother Ruth, his brother Doug, nephew Michael as well as extended family and loved ones.