Jack Rabinovitch, Founder of The Giller Prize, Dies at 87 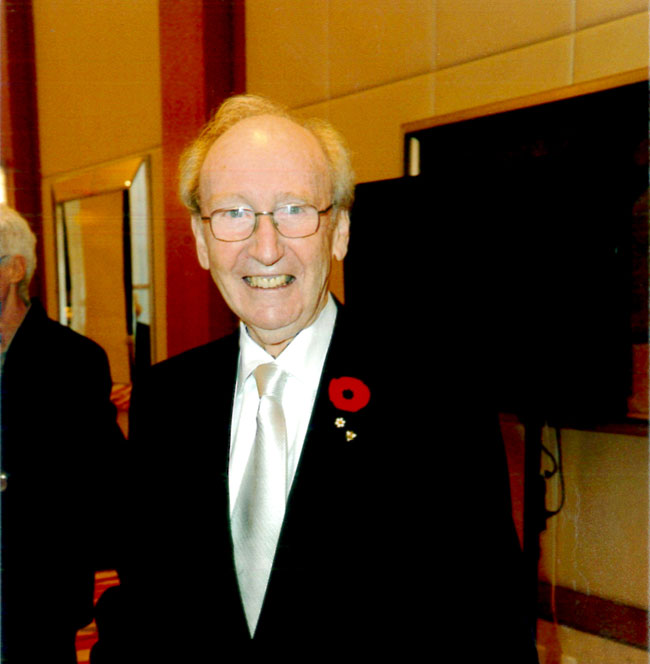 Jack Rabinovitch, the businessman who changed the face of Canadian literature, died Sunday in Toronto. He was 87. According to a family announcement on the Benjamin’s Park Memorial Chapel website, his death was the result of “injuries suffered in a catastrophic fall at his home a few days ago.”

As founder of the Giller Prize, Rabinovitch was responsible for raising the profile of Canadian writers and writing, drawing the authors from their solitary craft into a world of spotlights and red carpets.

“His gifts to the culture have been substantial and his legacy will endure,” Linden MacIntyre said in a statement. The former CBC journalist was awarded the Giller Prize in 2009 for his novel The Bishop’s Man. “Jack was a warm, generous and funny man. His death … is a loss that is personal and deep.”

Rabinovitch was born in Montreal in 1930, and grew up in the same neighbourhood as author Mordecai Richler. The two became lifelong friends.

“Jack grew up as one of ‘St. Urbain’s Horsemen,'” says a statement released by the Giller Prize, (a play on the title of Richler’s Governor General’s Award-winning novel), “and often joked that he learned his math skills selling newspapers at the corner of Ontario and St. Lawrence streets in Montreal.”

Initially a reporter and speechwriter, Rabinovitch turned his attention to the business world, first in food distribution and retail, shifting into real estate development and building, amassing significant personal wealth as an independent. He joined Trizec Corporation in 1972 as project manager, and was appointed Executive Vice President in 1986, and working on projects with the likes of Xerox, General Motors, the Sheraton Corporation and Hilton International.

He resigned his executive duties in 1993 when his wife, Doris Giller, was diagnosed with cancer.

Giller, herself born and raised in Montreal, was a lifelong journalist, who served as the Montreal Star’s Israeli correspondent, covering stories including the 1972 Munich Olympic disaster. Hired as the Book Review Editor at the Montreal Gazette, Giller “established a new standard for book reviews and successfully initiated contributions from major literary figures, ” according to her biography on the Giller Prize website.

That summer, seeking to honour the memory of his wife and her love of Canadian writing, Rabinovitch called Mordecai Richler for advice. Over drinks, naturally. “It started at a pub in Montreal called Woody’s,” Rabinovitch said in a CP interview, “and ended up at a famous restaurant in Montreal called Moishes, and over chopped liver we decided what to do.”

The plan was to create a prize in Doris’ name that would honour the best in Canadian fiction every year. The initial prize money — $25,000, the richest literary prize in the country at the time — came from Rabinovitch, and Richler offered to serve as an early juror, bringing aboard Alice Munro and academic David Staines. It was a plan fit for a horseman: as Charles Foran recounts in the biography Mordecai: The Life & Times: “‘My late wife was a fun person,’ Rabinovitch told the CBC. ‘Mordecai and I come from a fun background and so it seemed like a natural thing to do.'”

What started out as a gesture of love and honour – a book-loving man’s memorial to his book-loving wife – has changed the face of Canadian writing. Notable winners include Alice Munro, Michael Ondaatje, Mordecai Richler and Margaret Atwood.

It’s not only the prize money, which grew to $50,000 for the winner (and $5000 for each finalist) when Scotiabank came aboard as a sponsor, and is now $100,000. The prize has raised the profile of Canadian fiction in ways Rabinovitch could not have imagined. The announcement of the longlist and the nominees early every fall starts an international conversation that lasts weeks, highlighting not only the authors and books nominated, but sparking debates over the possible winner, and who has been overlooked. It’s the sort of widespread literary conversation that didn’t exist in this country when the prize was announced in 1994.

The prize is also responsible for the so-called “Giller bump,” the impressive sales jump that occurs following a book’s nomination for the prize, and especially for the winner. Estimates put the sales bump for some titles at over 900 per cent.

When news of his death broke on Sunday, family, writers, members of the literary community, and even politicians took to social media to express their condolences.

“Jack Rabinovitch changed the lives of countless Canadian authors with The Giller Prize. His legacy will live on in their work,” Prime Minister Justin Trudeau tweeted. “My sincere condolences to the family, friends and loved ones on his passing. He will be missed by many.”

“I lost my dear father today. How can that be? He was eternal,” Elana Rabinovitch, executive director of the Scotiabank Giller Prize, tweeted Sunday afternoon.

“RIP Jack Rabinovitch,” wrote fantasy writer and Order of Canada recipient Guy Gavriel Kay on Twitter. “His creation of the Giller Prize was a major moment in CanLit culture, and his generosity was extreme. A real loss.”

“We will miss him!!!” tweeted former Governor General Adrienne Clarkson, who served on the Giller Prize jury in 2006.

Rabinovitch was famous for signaling the end of every Giller gala by saying, “For the price of a dinner in this town you can buy all the nominated books, so eat at home and buy the books.”

That charge was taken up in the wake of his death Sunday on twitter by self-professed “literature nerd” Janet Somerville, who tweeted, “Buy 5 books by #Cdn writers in his honour, if you’re able. Give them to friends. A titan of #CanLit & human decency. Irreplaceable.”

Rabinovitch is survived by his partner Judy Clark, his sister Shirley, his three daughters Noni, Daphna and Elana, and three grandchildren. His funeral is scheduled for Wednesday August 9.