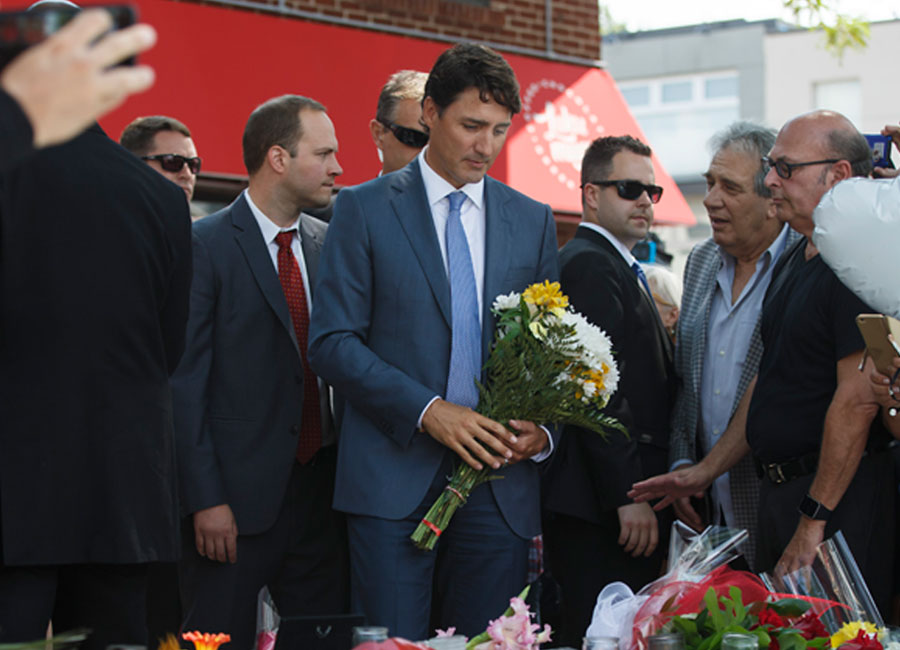 On Monday, Prime Minister Justin Trudeau attended the funeral for Reese Fallon, one of two people killed in the shooting on Danforth last weekend.

Prime Minister Justin Trudeau and Toronto Mayor John Tory both joined mourners at the private funeral for 18-year-old Reese Fallon, who was one of two people killed in the mass shooting that took place on the Danforth in Toronto on July 22.

A private funeral will also be held today for 10-year-old Julianna Kozis, who was also killed in the shooting.

After paying his respects at Fallon’s funeral, Trudeau lay flowers at the Alexander the Great Parkette on the Danforth, where members of the community have been laying flowers, cards and teddy bears since the shooting.

In a media address, Trudeau wouldn’t say whether he would be for or against a handgun ban in Canada but stressed the need to make “the right decision for the longterm.”

Fallon was also mourned at a public viewing in Toronto on Sunday, where hundreds paid their respect. The recent high school graduate was weeks away from starting nursing studies at McMaster University in Hamilton, Ont.

“We wish our sweet angel eternal peace and light. We will never forget you for one moment,” her family said in a statement.

Kozis was a synchronized swimmer who competed as a 10-and-under athlete for the Markham Synchro Club last season. In a statement released last week, her coach said she was “a beautiful, aspiring athlete who was in her third year in our sport.” Thirteen other people were left injured after Faisal Hussain, 29, fired into restaurants and storefronts on the busy Toronto street. After exchanging gunfire with the police, Hussain turned the gun on himself.

Investigators still haven’t determined a motive for the shooting, but Hussain’s family revealed that he had severe mental health issues, including depression and psychosis.

Toronto police Chief Mark Saunders addressed the possibility that mental health was a factor, calling it “the elephant in the room” and stressed the need for services and support to prevent vulnerable people from obtaining firearms.

“If we’re going to hide under the carpet and continue to do what we do, and then be shocked when we have these outcomes, then we’re doing a disservice to the communities we serve,” Saunders told the CBC.