A Brief History of Stephen Hawking, Theoretical Physicist, on the Anniversary of His Death 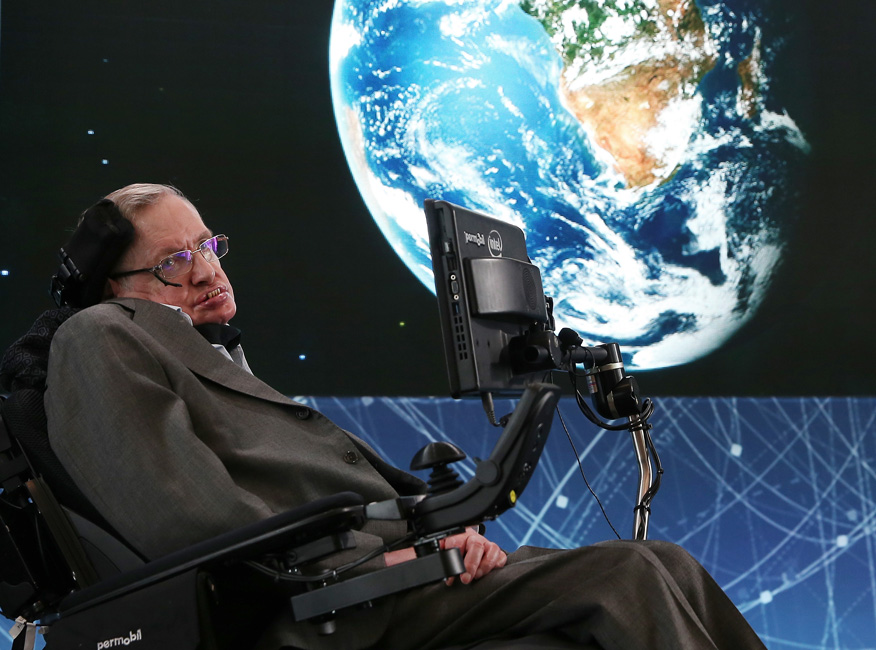 Stephen Hawking at the One World Observatory in April 12, 2016 in New York City. (Photo by Jemal Countess/Getty Images)

A year ago Thursday, Stephen Hawking’s ALS-stricken body finally unfettered to explore the infinite cosmos that he spent his whole life trying to comprehend.

Hawking was first diagnosed with ALS at the age of 21, a wasting motor disease which gradually takes away muscle use, eventually confining him to a wheelchair and forcing him to speak through a voice synthesizer.

Despite the handicap, he refused to allow his collapsing body to trap his brilliant mind – for the last period of his life he was able to operate his speech-generating device by twitching his cheek muscle – the last one functioning in his body.

“At the time [of my diagnosis], I thought my life was over and that I would never realize the potential I felt I had,” Stephen Hawking wrote in his biography. “But now, 50 years later, I can be quietly satisfied with my life.” A medical marvel for surviving so long with the disease, he became an ambassador for the disabled as well as a global fundraiser .

Born in Oxford, England, Hawking studied theoretical physics at Cambridge, a course of work he described as “ridiculously easy.”

He burst onto the scene in 1988, with his seminal book A Brief History of Time, which he explored the mysteries of space, black holes and the Big Bang, positing the universe had no beginning or end and that time therefore had no meaning.

Not only did this book (which eventually sold 10 million copies) and his subsequent studies on black holes, make Hawking a wonder in the world of theoretical physics, but it also propelled him to stardom in the pop cultural sphere, perhaps the first scientist since Einstein to achieve such widespread mainstream fame.

He went on to write seven books, including his last in 2013, My Brief History, most written for lay readers who didn’t have a background in science.

For his work, Hawking was awarded all the major scientific prizes and became a global celebrity, playing himself in an episode of Star Trek: The Next Generation, The Simpsons, Futurama and The Big Bang Theory.

There has been a global outpouring of appreciation and grief from those who knew him in the world of entertainment, including Jim Parsons, whose character Sheldon Cooper, worshipped Hawking. Of course Hawking’s extraordinary life was the subject of the film The Theory of Everything, in which British actor Eddie Redmayne won an Oscar for the role. The actor released a statement, “We have lost a truly beautiful mind, an astonishing scientist and the funniest man I have ever had the pleasure to meet,” Redmayne said. “My love and thoughts are with his extraordinary family.”

Hawking was married and divorced twice, to Jaye Wilde and Elaine Mason, and leaves three children behind, including daughter Lucy with whom he collaborated on a children’s book: George’s Secret Key to the Universe.

A quick-witted speaker with a disarming self-deprecating humour, here are some of Stephen Hawking’s best known quotes on the universe, life, death and his disability:

On his childhood: “When I was twelve, one of my friends bet another friend a bag of sweets that I would never come to anything. I don’t know if this bet was ever settled, and if so, which way it was decided.”

On alien life: “If aliens visit us, the outcome would be much as when Columbus landed in America, which didn’t turn out well for the Native Americans. We only have to look at ourselves to see how intelligent life might develop into something we wouldn’t want to meet.”

On death: “I have lived with the prospect of an early death for the last 49 years. I’m not afraid of death, but I’m in no hurry to die. I have so much I want to do first,”

On what drives him: “I am just a child who has never grown up. I still keep asking these ‘how’ and ‘why’ questions. Occasionally, I find an answer.”

On his disability: “My advice to other disabled people would be, concentrate on things your disability doesn’t prevent you doing well, and don’t regret the things it interferes with. Don’t be disabled in spirit, as well as physically.”

On his insatiable curiosity: “Try to make sense of what you see and wonder about what makes the universe exist. Be curious, and however difficult life may seem, there is always something you can do, and succeed at. It matters that you don’t just give up.”

On time travel: “I would go back to 1967, and the birth of my first child, Robert. My three children have brought me great joy.”

On predetermination: “I have noticed that even people who claim everything is predetermined and that we can do nothing to change it, look before they cross the road.”

On his celebrity: The downside of my celebrity is that I cannot go anywhere in the world without being recognized. It is not enough for me to wear dark sunglasses and a wig. The wheelchair gives me away.”

On his theory of life: “One, remember to look up at the stars and not down at your feet. Two, never give up work. Work gives you meaning and purpose and life is empty without it. Three, if you are lucky enough to find love, remember it is there and don’t throw it away.”

On Survival: “Keeping an active mind has been vital to my survival, as has been maintaining a sense of humor.”

On his theory of time: “I have so much that I want to do. I hate wasting time.”