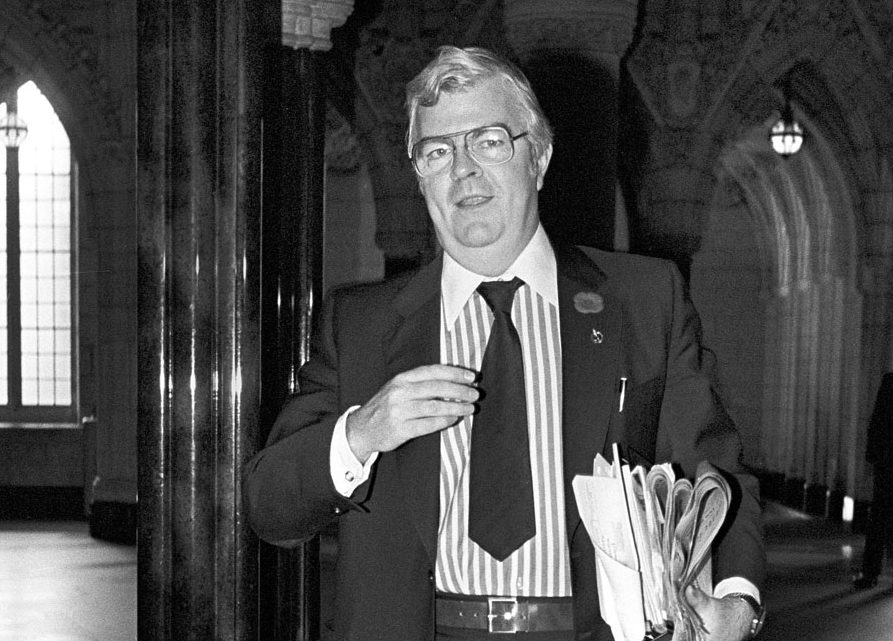 John Crosbie, on Parliament Hill in 1979, will be remembered as a colourful politician whose unguarded wit often landed him in trouble. Photo: The Canadian Press Images/Fred Chartrand

Flags are flying at half-mast in Newfoundland and Labrador today as people mourn the passing of legendary son John Crosbie, one the province’s most beloved, witty and colourful politicians.

Crosbie, who died Thursday at the age of 88, was remembered by his family as “an independent spirit, a passionate nation builder, an orator of biting wit and charm, and always — forever — a tireless fighter for the people.” He is survived by his wife, Jane, and children Michael, Beth and Ches.

Crosbie, who grew up in a political family (his father Chessley was the leader of the Economic Union Party that opposed Newfoundland’s confederation with Canada) studied law at the University of Dalhousie and began practising in St. John’s in 1957. He launched his own political career in 1965, with a brief stint as a city councillor in St. John’s before moving on to provincial politics, where he served in the cabinet of legendary Newfoundland Liberal Premier Joey Smallwood.

After falling out with the Liberals in 1969, Crosbie joined the provincial Progressive Conservative Party before throwing his hat into the federal ring in 1976, eventually serving under the governments of Joe Clark and Brian Mulroney.

Crosbie had a long and distinguished political career, which saw him lead a number of ministries — including Finance, Fisheries and Justice — as well as making an unsuccessful leadership bid for the federal Conservatives in 1983.

He will be most remembered as fearless politician whose colourful sense of humour and witty barbs often landed him in hot water. As fisheries minister in the early ’90s, he was forced to close down Atlantic cod fishing. When facing an angry mob of Newfoundland fishermen, he defended his actions, saying, “I didn’t take the fish from the goddamned water!” On another occasion, he stood up in the House and accused the Opposition Liberals of “howling and bawling like a bunch of banshees.”

But the incident he will best be remembered for occurred in 1985, while he was serving as justice minister under Mulroney. During one particularly tense session in the House of Commons, Crosbie grew weary of a fierce heckling he was receiving at the hands of Sheila Copps, then a relatively unknown Liberal MP from Hamilton. Having had just about enough, Crosbie famously told Copps to “Just quiet down, baby!” — a quip that clearly crossed the line, even back then. (It’s hard to imagine the social media outrage that comment would have provoked today.) Copps, who was never caught short for words, jousted right back. “I’m nobody’s baby,” she said, a line that vaulted her into political stardom as well as the title of her future book on surviving life in politics.

Crosbie further incurred the wrath of Copps and feminists in 1990, when attending a Conservative Party fundraiser he was caught off camera misquoting a Johnny Cash song that included the lyrics: “Pass the tequila, Sheila, and lie down and love me again.”

While Crosbie’s baiting tactics caused a major stir back then (“I was denounced at 10,000 meetings and by 10 million angry women,” he later joked), he certainly wasn’t held to the same scrutiny he would face in today’s politically correct climate. To her credit, Copps didn’t bear a grudge against her old political nemesis, and the pair eventually became friends.

To Crosbie, though, politics was never personal and anything he said, no matter in how poor taste, was always meant in good fun. Reflecting back on the many controversies that got him into trouble, he said, “I made the news quite a bit and, of course, I didn’t mind that because any politician wants to be noticed.”

Marjory LeBreton, a Conservative colleague from the old days, remembers the fun he brought to the often mundane world of politics. “We could fill a book with Crosbie-isms, some of which would not pass the ‘political correctness’ restrictions we currently live with,” she told CTV.

After his federal career wound down, Crosbie remained active in politics, becoming the Lieutenant Governor of Newfoundland and Labrador between 2008 and 2013. Not surprisingly, controversy again followed him, even in his supposedly ceremonial role. During  a visit by Prince Charles and Camilla to St. John’s in 2009, Crosbie insisted on wearing a sealskin coat, inciting the ire of animal rights activists who excoriated him for his support of the seal hunt.

“I think they rather liked the coat but I don’t want to quote them saying that they’re supporters of the seal hunt,” Crosbie told reporters later that day.

In 2018, looking back on a long career in politics, Crosbie told the Newfoundland Herald, I have no regrets having been involved in politics and being successful in some areas and having failed in others, but I made the attempt to achieve what I thought was the right position for the country and for the province.”

A Legacy of Firsts: Remembering Diahann Carroll, Star of Stage and Screen Who Died at 84