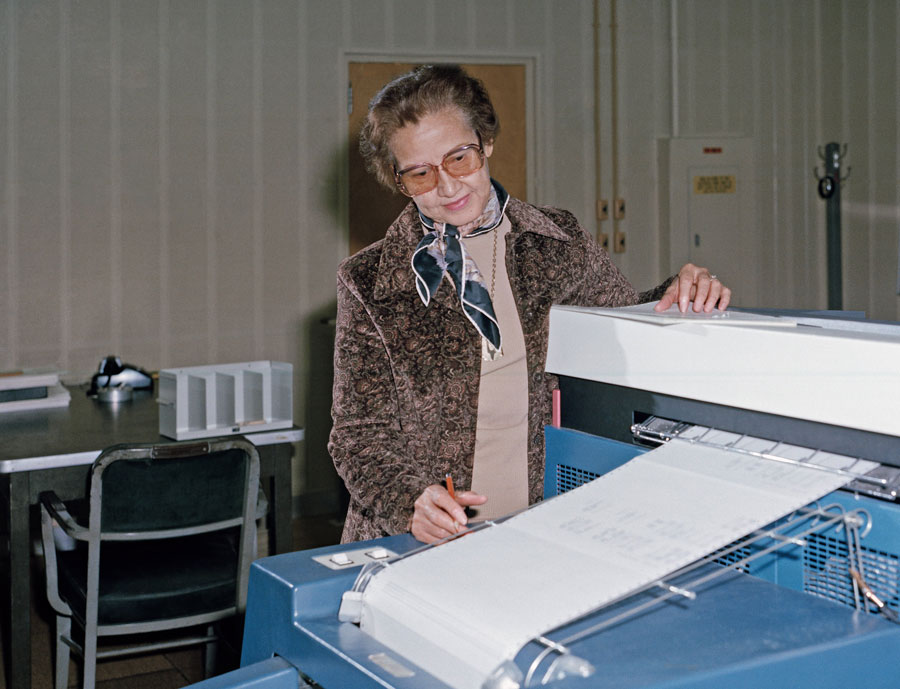 Celebrated physicist and mathematician Katherine Johnson, who has died at the age of 101, leaves a significant legacy as the rare hidden historical figure who got her due in her lifetime.

Johnson was among the remarkable group of previously unsung African-American women who calculated how to put astronauts into orbit, and one of the many female mathematicians — like early computer programmers Ada Lovelace and Grace Hopper — whose stories are now being excavated and restored to their rightful place in history.

In 2015, when U.S. President Barack Obama awarded Johnson with America’s highest civilian honour, the Presidential Medal of Freedom, the ceremony  singled out Johnson’s work “charting new frontiers for humanity’s explorations of space and creating new possibilities for all humankind,” like calculating the flight path for the first manned mission to the moon. After enumerating Johnson’s critical role in numerous NASA milestones, the citation went on to explain how she “refused to be limited by society’s expectations of her gender and race while expanding the boundaries of humanity’s reach.”

It’s a reference to the challenges in the 1940s and through her adulthood and career, with additional professional barriers in the context of the segregation and sexism of the early 1960s and the turbulence of the Civil Rights movement. It’s fitting in Black History Month to remember her accomplishments and triumphs as well as the limited education available to African-Americans and to women in science, when community schools like the Hampton Institute (a historically Black university in Virginia that offered an Engineering for Women training class) were the exception and not the rule. That’s part of her legacy, too.

The acknowledgement of these pioneering women is a relatively recent development and thanks in no small part to Johnson, whose own contribution to space history wasn’t widely known, let alone in popular culture, until after that medal ceremony.

Soon, however, Johnson went on to have a building at Langley named in her honour and became the hero of Hidden Figures, an Academy Award-nominated biographical drama starring Taraji P. Henson that’s based on Margot Lee Shetterly’s book of the same name. When Johnson joined her fictional counterpart and the movie’s cast onstage at the Oscars in 2017, she earned a rousing standing ovation. (She even joined the ranks of Mattel’s Inspiring Women range of Barbie dolls.)

Falling in Black History Month, her passing is also a time to reflect on the fact that Johnson’s level of visibility for a Black woman scientist was something probably not felt in popular culture since Nichelle Nichols played Starfleet officer Nyota Uhura in Star Trek, a technician with an aptitude for math and navigational computing (and she was fictional)  – and how that needs to change. In her long and remarkable life, math prodigy Johnson’s role in the history of the American Space Race was a relatively recent “discovery.” It’s not that the stories of women like her were forgotten; it’s that they were never told in the first place.

Who else don’t we know about?

That’s a question that Johnson and Hidden Figures also helped bring to the fore.

As the first credited female author of a Langley Aerospace Mechanics report, she was among the many “human computers” essential to operations, like Project Mercury’s first orbital flight, her calculations enabled Apollo 11 to land on the moon and codified mathematical principles still at the core of space travel. “Get the girl to check the numbers,” John Glenn reportedly said in February 1962, when he requested a final review before his historic orbit.

Part of Johnson’s life legacy at NASA as a #WomeninSTEM is an inspiration for future generations. In her bestselling Women in Science children’s book, for example, Rachel Ignotofsky depicts the physicist and mathematician floating in a galaxy, reaching for the stars. Similarly, Johnson only recently wrote her autobiography Reaching for the Moon (Simon & Schuster) last year, and it’s specifically aimed at young middle grade readers age 10 and up to inspire them at a crucial time. Johnson, now famously, was among the few Black women working at the Langley Memorial Aeronautical Laboratory in Virginia (NACA, NASA’s predecessor), alongside  engineer Mary Jackson and mathematician Dorothy Vaughan.

The hit movie about Johnson depicts how the all-white, all-male task force mistakenly assume she’s the janitor (whose pay grade and work classification she didn’t much outrank at the time, sadly). But as the New Yorker rightly observed, more generally, it’s “a subtle and powerful work of counter-history or, rather, of a finally and long-deferred accurate history.”

The phenomenal popularity of Hidden Figures not only confirmed that there was an audience for these entertainment projects but amplified the message that there are many other similar stories still to unearth and share — take, for example, the grassroots campaign for wider acknowledgement of inventor Marie Van Britton Brown, the Black woman and tech visionary from Queens who first patented a version of what would become CCTV and video doorbells.

The challenge and re-appraisal of accepted history is now a movement with momentum: a year after the Oscars ovation, for example, Hidden Figures author Shetterly encouraged Twitter to help crowdsource the identity of the only uncaptioned professional—a woman, naturally—in a 1970s scientific conference photograph (she was eventually unearthed as retired Smithsonian Institution scientist Sheila Minor Huff).

Casting More Widely for Stories That Get Remembered and Told

If another aspect of Johnson’s legacy involves casting more widely for the stories that get remembered and told — and who gets to tell them, some can be found simply by follow the hashtag #HiddenFigures, as well as #HiddenFigureNoMore. Others are now making their way to the page and screen with more regularity.

Octavia Spencer, for example, played one of Johnson’s genius colleagues in Hidden Figures and soon stars as Sarah Breedlove in the forthcoming Netflix series Self Made: Inspired by the Life of Madam C.J. Walker (she’s also an executive producer; it debuts March 20). Turn-of-the-century beauty mogul Breedlove was better known as her hair brand alter ego and created products for the African-American beauty market. She was the first entrepreneurial Black woman millionaire (and when she died in 1919, the wealthiest self-made woman in America of any race) and a political activist who donated heavily to African-American schools in the South.

The Netflix series is a project by Kasi Lemmons, whose biopic of American abolitionist Harriet Tubman and her Underground Railroad rescue missions came out last year. Now, let’s please demand more stories — about aviatrix Bessie Coleman, the first woman of African-American descent to hold a pilot’s licence and the lengths she had to go to in the 1920s to further her aviation training. Or about Black cosmetics pioneer and Canadian civil-rights activist Viola Desmond, who is the subject of a scant Heritage Minute. Her portrait that now also adorns our $10 bill should only be the start of telling her resistance story. Likewise the mid-century pioneers Ophelia DeVore, Dorothea Towles and Helen Williams that stylist Marcellas Reynolds’s new book Supreme Models restores to a history of Black fashion models that often starts only in the 1960s.

To Infinity & Beyond: Defying Gravity In Alabama