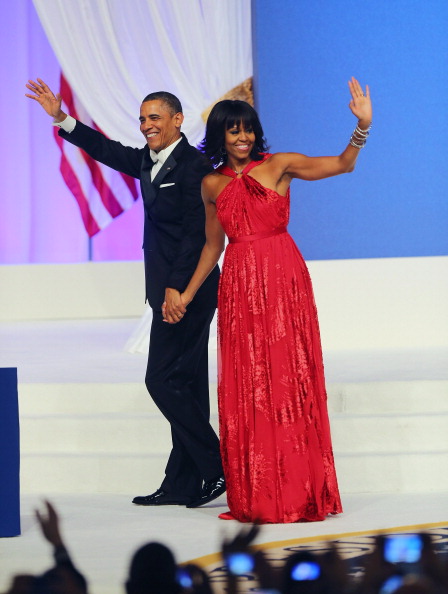 In a move that caught most fashion observers by surprise, First Lady Michelle Obama opted, once again, for an Inaugural gown designed by Jason Wu.

In a fiery red colour, the sleeveless chiffon and velvet gown with a high halter neckline and low back, struck a sexy note for the First Lady entering a second term.

It was in stark contrast to the white ball gown – almost bridal looking – Wu designed for Mrs. Obama for her first Inaugural Ball four years ago.

That gown catapulted the young New York based designer into the international limelight and was generally believed to help grow his business tremendously by introducing his name to the masses and beyond America. He later went on to strike deals with mega-retailers like Target to design affordable limited edition collections that flew off the racks.

Hence, much speculation was whirling in the days leading up to the Inauguration Ball on which designer would benefit from being anointed as the maker of Mrs. Obama’s gown for this historic night.
While earlier in the day, for the Presidential swearing-in, she wore a form fitting silk blue coat by designer Thom Browne – a designer known more for his avant garde menswear – many were hoping that she would do the same later in the evening by opting for a relatively unknown or unexpected designer or at least one she has not worn before.

But if there is one thing one can say about this modern and forward thinking First Lady – she can be unpredictable in her fashion choices and often refuses to play to expectations and breaks many a style rule in the process.

She wore a sleeveless Michael Kors dress for her first official White House portrait that bared her arms – a first when it came to First Lady portraits. She raised many eyebrows when meeting the Queen at Buckingham Palace for the first time, wearing not a jacket, but a knit cardigan which many deemed as too casual for such a regal audience.

She also went against protocol and wore a red Alexander McQueen gown – a British label – instead of an American designer for a White House state dinner for China’s President.

She will also go down in fashion history books as the first First Lady to wear such inexpensive fast fashion retailers as H&M, Gap and J.Crew to public events.

But her fashion and beauty choices have proven to be hugely influential on American women. Even in the few days before the Presidential Inauguration, when she was seen sporting a new hair style that featured bangs – even the President had to jokingly refer to the overwhelming attention her hair cut generated. (Her new bangs now even have a Twitter handle.)

With four more years in the White House, it is safe to assume this is one First Lady who will continue to surprise, inspire and keep the world tuning in to her every move.