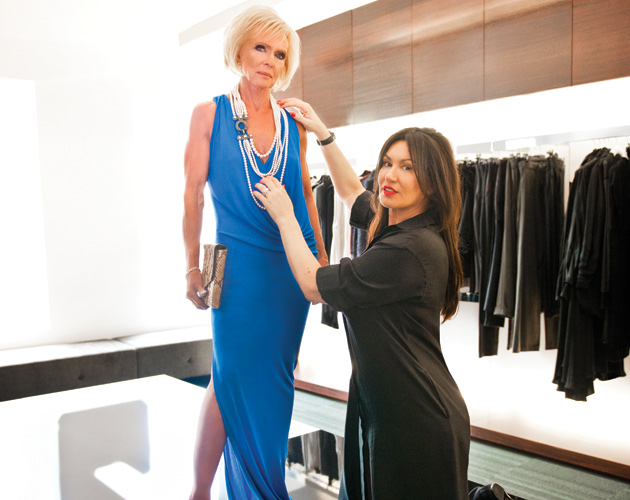 Fashion doesn’t stop after 50, as these style mavens prove.

What would the perfect modern ladies’ lunch look like? A blindingly bright spring day at a window table at One came damned near close: languid 1:30 call time, a couple of bottles of earthy rich red in grand balloon glasses, some salads with rare meat on them. And no-holds-barred, frank meaningful talk from women emancipated from the effacing politesse of youth.

But these are not ladies of leisure. Rather, the playtime has been carefully carved out of workaholic calendars: Linda Perisa, 53, is a single mum and the coolest shopkeep in town; her avant-garde designer enclave tucked into a Yorkville townhouse in Toronto is called 119 Corbò. And Carol Pettle who, at 74, still works from dawn as a nurse in her husband’s hormone replacement therapy clinic, does a hard-core power hour workout every day and has the rocking-est McQueen-meets-Rick Owens wardrobe of any mother of five and 10 times over grandmother anywhere.

“You would be surprised by how simple my wardrobe is,” says Perisa, who tops out at six foot two in her “everyday” four-inch heels. Indeed, she is wearing her uniform today, a Haider Ackermann grey boyfriend sweater and black leggings from her own house label. “They just schwoop, suck you in. Fashion is sleight of hand,” she says, referring to the leggings. And the single pop of colour is her signature Nars Heat Wave bold blood orange matte lipstick. “I came of age in the ’80s,” she says of her years modelling at the beginning of the black-garb revolution. “I keep things simple with a cutting edge.”

Pettle, by contrast, is petite and goes big for colour. Her arms are so cut they make Michelle Obama’s much-lauded biceps look lax. “My trainer said I couldn’t get the arms I wanted. I showed him.” She is a devoted 119 Corbò shopper and somewhat of a muse for Perisa when she is shopping abroad each season. “Our age group starts at 30, 40. We dress women, not girls,” she says. “These are strong clothes for people who know who they are. And not only does Carol have the hottest body, she has the most exciting daring and flair.” 119 Corbò is home to a host of strong-voiced designers. “Fabulous pieces I believe in,” says Perisa – from Stella McCartney and Ann Demeule-meester to Martin Margiela and Dries van Noten to Céline, Givenchy, Rick Owens and Alexander McQueen.

Her favourites, if she has to pick,are the Belgians, Demeulemeester and Ackermann. (She brought the Colombian-born Belgian-based avant-garde Ackermann to Toronto for his first North American show, held at the ROM, for fall 2010.) They appeal to the women who appeal to Perisa:“I love women today. There is a no-nonsense honesty about them. They are not living their lives for anyone else. Not dressing for a husband – but they sure like it.”

Seven years ago, Perisa took a big leap of faith. After a business breakup with her partner in the store Corbo on Bloor, she struck out on her own. “The experience taught me that I want to be ready for anything,” she says now. And the new shop, rechristened 119 Corbò, is a much more tightly edited collection of collections. The look is Linda: flowing fabrics, long, layering, modern – often monochromatic, as befits the nature of the Belgian school and the avant-garde in general. But there are strong statement suits, bright pops of colour and some carefully chosen seasonal patterns – think the nightlight photos screened onto Dries van Noten’s spring pieces. And there is vigour and colour in the bags. The entire front of the store is about bags. “The Cèline bags are barely touching the shelves. And the Givenchys are a pretty close second on the covetability meter.”

Pettle, who is busting a gorgeous classic grey Chanel quilted double-chain today, is, says Perisa, a gifted mixologist. “You bring as much to us as we could ever bring to you,” she says of her client. “When we are in Europe, I’m on the phone with her.” Pettle laughs. “I do the treadmill at the office at 6 a.m. every working day. The only thing I stop for is when images from the showrooms come up on my phone. I sometimes have to run to the main computer to enlarge them if they are exciting.” Pettle claims she is “a very shy person. I express myself best with my clothes.”

This is Pettle’s second career. She worked in the hospital alongside her husband, Dr. Alvin Pettle, an obstetrician. When he moved to open the Ruth Pettle Wellness Centre on Bathurst Street in Toronto 15 years ago (named for Carol’s late mother-in-law, who died of breast cancer), she went along to run the office. Dr. Pettle was the first provider of bio-identical hormones, and it is Carol who fields the mountain of calls from women needing guidance on their regimens.

Her schedule is such that she has to take days off to run away to the big fashion clubhouse on Yorkville Avenue. Everyone who comes into 119 is on a first-name basis. “People always come up to Carol at the store and go over what she has put together,” says Perisa. “We just sit back, and people want to buy what she has on.”

“What I like,” says Pettle, who is in the enviable position of also fending off granddaughters who want to shop in her closet, “is that there is something about these designers that mixes well season over season.” At 5 foot 2, Pettle loves a heel as much as the statuesque Parisa. “Heels take off five pounds instantly,” she says. “You do the math.”

And tucked in behind the heels is the real treasure of the clubhouse – a white-gauzed patio strewn with pillows and overlooking Amber nightclub and the throngs below on Bellair. There is often wine flowing, and a little kitchen produces sushi and salads for staff and friends alike. “Sometimes, people will walk in the door and head straight to the roof to hang out, right past the clothes,” says Perisa.

“If you work as hard as I do, believe me, you need to bring your friends to you. But what I do doesn’t feel like work. Going out on my own felt terribly risky, but the rewards of doing things your way? Priceless.”