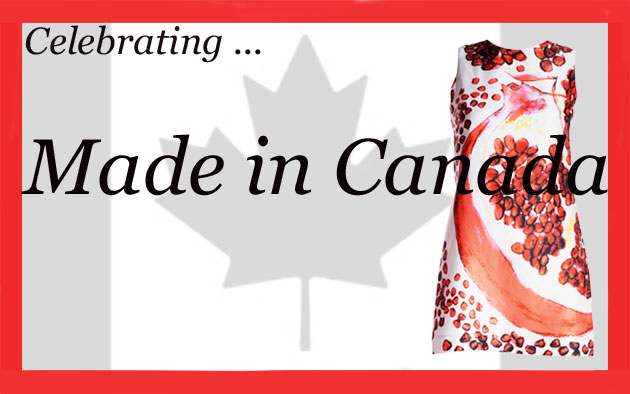 Not every Canadian fashion company is beating a path to cheaper off-shore manufacturing. Some brands, both big and small, still choose to keep their production at home. As we celebrate Canada Day, we pay tribute to seven brands that take pride in the Made-in-Canada label.

STOLEN RICHES
This family-owned company has been manufacturing shoelaces in Toronto since 1915. But it has modernized and entered the fashion fray with whimsical and colourful laces that light up basic brogues and wingtips, prompting GQ magazine to declare that they “bring impact to any look.”

ISAAC ELY BESPOKE
For gentlemen seeking a custom-made suit without making a trek to Savile Row in London, this is probably a good alternative.
Keeping every aspect of the production of their suitings and shirts in Toronto assures their customers get a perfect fit from several fittings with considerations to small details from the way their shoulders slope to posture and even the way the client might rest his elbows on a table. This is what sets bespoke tailoring apart from made-to-measure: the garment is constructed from scratch to your unique specifications and measurements.

JUDITH AND CHARLES
“Tailored with love in Canada” is the proud tagline behind this Montreal-based label. Conceived by Charles Le Pierres and Judith Richardson, the duo focus on womenswear targeted to women in the corporate world. Luxury fabrics, superb tailoring and clean streamlined looks makes these investment-worthy clothes.

SMYTHE
The Toronto label was launched in 2004 by Andrea Lenczner and Christie Smythe with a focus on well-tailored jackets and quickly gained loyal fans who loved the traditional menswear fabrics, the retro looking colours and sharp cut of a Smythe blazer.
But then along came Kate Middleton, who donned one of their navy blue and gold-buttoned jackets for her trip to Canada in 2011, and the brand was suddenly catapulted into the international spotlight. Now, they count the Duchess among their fans, as she continues to wear the jacket on several high-profile occasions, including a sporting event at the London Olympics.

OBAKKI
Vancouver designer Treana Peake’s label is not only patriotic by keeping her production in her hometown but there is also a humanitarian aspect to company as well. Peake donates 100 per cent net proceeds through her Obakki Foundation to build water wells for nomadic people in South Sudan.
The designer is married to Ryan Peake, guitarist for Nickleback, and has had her modern, easy-to-wear yet sophisticated garments featured in Vogue and worn by Gwyneth Paltrow.

ROOTS
A large percentage of merchandise from this iconic Canadian brand is still manufactured on our shores, including some of its footwear. (There are very few companies that manufacture shoes here in Canada.) These Oxford-style leather shoes have an old world charm to them and the natural rubber sole makes them flexible, comfortable and slip resistant.

ANU RAINA
Since graduating from Sheridan College in 2010, this textile artist has seen her work featured in Pearson International Airport and debuted a fashion collection. Working out of her studio on Oakville, Ont., Raina hand draws all her prints before transferring them to her silk designs. From dresses to scarves, this Canadian collection is cool, charming and chic.