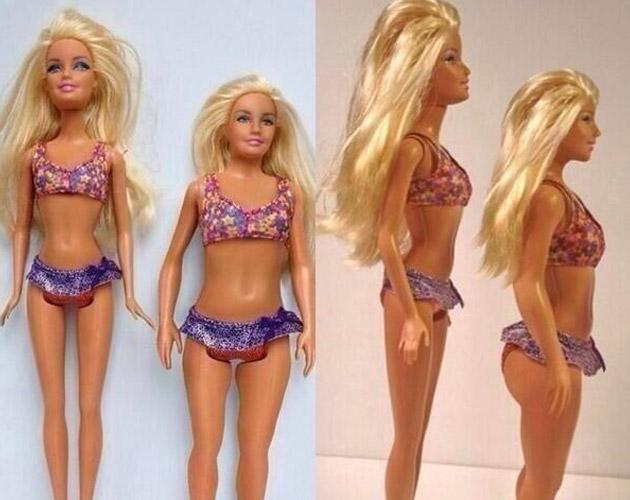 It’s been 54 years since the first Barbie doll was released, and during that time the eternally youthful blond has dealt with her fair share of criticism. But this week, the blue-eyed girl with countless career options has finally met her realistic match.

Created by 24-year-old artist and researcher Nickolay Lamm, Barbie 2013 was created to look like an average 19-year-old girl. She’s 150 pounds and 163.3 cm tall, giving her a BMI of 25.5 (a bit chubby but nowhere near the obese territory; the original Barbie would be deemed grossly underweight).

If Barbie dolls were real, they’d have unrealistic measurements of 36-18-33, while Barbie 2013 clocks in at 32-31-33. Even her face was given a makeover – Lamm used photos of celebrities without makeup as inspiration.

The social networks have gone to town debating whether the update is a good thing or even necessary. Yes, realistic dolls that address a variety of shapes, races and creeds are much more prevalent today and reflect the society we live in. However, are we really blaming a doll for the eating disorders and body dysmorphic issues some women face throughout their lives?

At the least, Barbie 2013 offers some diversity. And now that we’ve put some meat on her bones, maybe we can see about getting her married off to Ken at long last? Or has she been waiting for Kendra all these years?