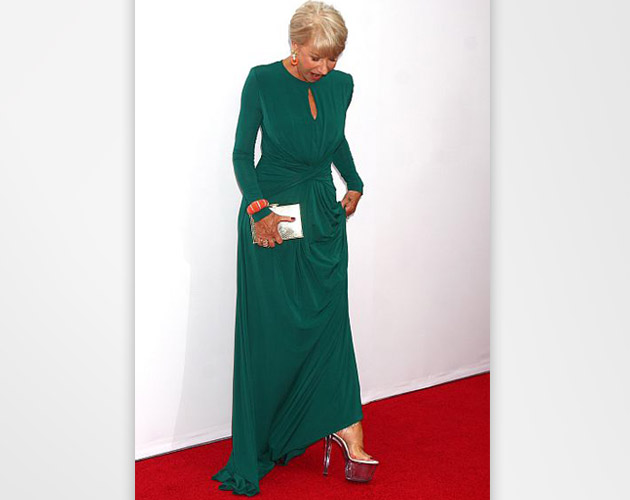 She has won an Oscar and several BAFTAs for her film and television work, but the Internet is buzzing about Helen Mirren this week because of her choice of footwear on the red carpet at the premier of her latest movie Red 2 in Los Angeles.

The actress, dressed in a slinky Elie Saab jersey gown, lifted her hem to show the paps her Perspex platform shoes, those clear-heeled staggeringly high stilettos much favoured by pole dancers and women who practice the world’s oldest profession on street corners at night.

But Mirren, who plays an assassin in Red 2, that also stars Bruce Willis and Anthony Hopkins, should be used to the attention she attracts with her sometimes unconventional red carpet fashion statements.

Earlier, this year, she raised eyebrows when she dyed her hair pink.

As she told Jay Leno on The Tonight Show this week when he asked if she sought her husband’s advice before going candy floss pink, she replied, “I’m too old to ask people permission to do things anymore.”

But why would someone who could clearly afford to buy designer shoes to go with her designer gown – the plastic stripper shoes reportedly cost US$25 – opt for seedy shoes favoured by women decades younger than her?

Height could have been one very probable reason.

Her gown was too long and the towering platform would have added an extra six inches to her frame.

As for tripping in stripping heels?

Somehow, we don’t see her as the type to be upstaged by a pair of cheap shoes.