Cole Haan Features Those Born in 1928 for New Ad Campaign 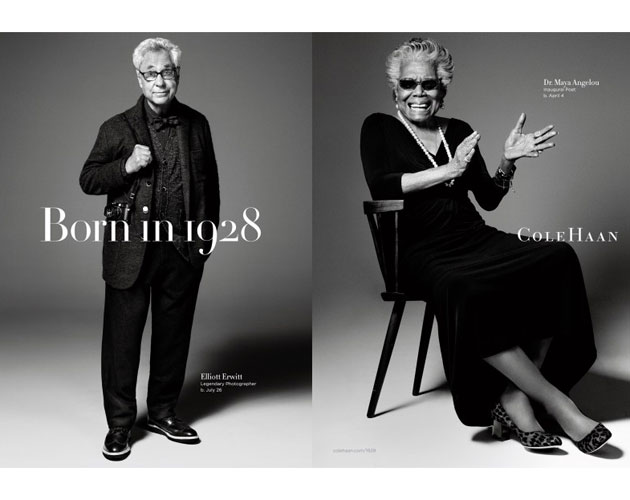 Distinguished clothing company Cole Haan has been in business since 1928, an accomplishment worth celebrating. And what better way to do so than with accomplished octogenarians who share the same birth year. That’s right, its new print and digital campaign called Born in 1928 will feature astronaut Jim Lovell, writer Maya Angelou, photographer Elliot Erwitt and model China Machado who are all 85, except for Machado who is 84. Well played, Cole Haan.

This is just another example of brands recognizing that it is not just young faces that sell. There is something appealing about a group of people who represent a lifetime of experiences and a wisdom that only comes with age.

“They are as relevant today as they were in the past, and they all represent various perspectives that we thought would resonate with our consumer” Cole Haan’s vice-president of marketing Erin Riley told Women’s Wear Daily. She added, “They are all vibrant examples of how timelessness and true style are born out of confidence — and that never expires.” We couldn’t agree more.

Maya Angelou spoke of aging and the Cole Haan campaign with Vogue’s Thessaly La Force. When asked what life was like in 1928, Angelou responded, “I was born then, darling, I don’t remember.” And shared the advice she gave Oprah about turning 60. She said, “I told her it’s fabulous at 60. I promise you. You want to be 60. You want to be smart and clever and intelligent and witty and kind and generous and sure of yourself. You’re better at what you do. More brave. At 60 you are more able to do that than you were at 50. There are certain things you don’t have to worry about.” Adding, “Eighty is okay. But 85 is a knockout.”

The black-and-white portraits featured in the campaign were shot by Daniel Jackson and will launch online and in store windows on Sept. 3. There will be a video component as well featured on Cole Haan’s website until November.