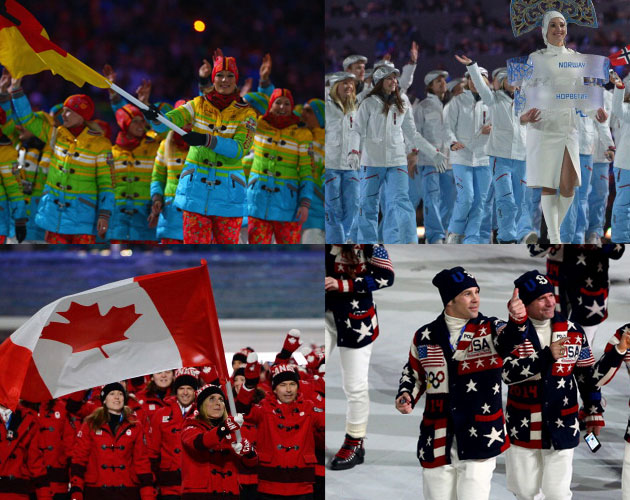 When it comes to fashion, winter sports have always walked precariously along the fine line of good taste.

Perhaps it’s that blank backdrop of all that snow and ice that makes the garish colours and wacky pattern combinations leap out on the television screens. And they love a bit of theatrical flair. What would figure skating be without some glitzy sequins and shimmery spandex?

And is there a winter sports athlete that one can call a fashion plate during their off-hours? Unlike summer sports counterparts like soccer players (David Beckham) and basketball players (LeBron James), who show they have game even in their off-hours.

But thankfully, winter sports have snowboarders, usually a young, brash contingent that sport some radical and cool outfits on the slopes.
So it’s always with some trepidation one looks at the Parade of Nations during the Opening Ceremonies of the Winter Games to see what the teams from each country are wearing.

While we are aware that local customs, Olympic rules and sponsorships can all play a role in what the teams wear, we root that these sporting heroes will look cool rather than comedic.

We round up some of the style hits and misses at the 2014 Winter Olympics Opening Ceremony in Sochi. 1. Canada
The Canadians did us proud, dressed in Hudson’s Bay scarlet blanket coats with toggle style buttons. It looked a bit retro but it made for a striking and stylish image as they came out together. 2. U.S.A.
Designer Ralph Lauren was responsible for Team USA and their chunky knit cardigans and cream pants tucked into Alpine boots, which looked like it stepped right off the runway – so on trend it was. Sure, the cardigan might have been a little too overly patterned with all those star motifs, but none-the-less it was ruggedly good-looking. 3. Germany
Surprisingly – because they are not exactly known for a sense of colour – the Germans appeared in a rainbow bright uniform. Was it a statement in support of gay rights during these politically charged Games or just a strong sense of style? Which ever, it was snazzy and memorable. 4. Norway
Blue and white. Might as well have called it bland and weak. It’s not that there was anything wrong with their blue pants and white jackets ensemble but it was just tepid and less-than-memorable. 5. Great Britain
It would have been too easy for the English to fall back on that great design motif – the Union Jack – for their uniforms. Instead the dark blue and burgundy colours of their uniform looked like a modern take of their flag colours, making for a sleek and powerful image. 7. France
Leave it to the French for cool chic. Puffy jackets done in a blazer style (made by Lacoste) paired with khaki pants made for a casually elegant look that looked effortless yet was the height of style. 8. Russia
Somewhat bizarrely, the Russian team dressed their men and women differently. The women got the short end of the style stick. with fur trimmed coats that made them look like Santa Claus while the men got the good stuff – sharp-looking navy pea coats. 9. Ireland
Was it shamrock green they were going for? Unfortunately, the green outfits, flicked with bits of orange, looked more military than sporty. 10. Slovenia
White with blue and lime green, it looked very retro circa 1970s. But as a team, they cut a strikingly sharp look as they came out.