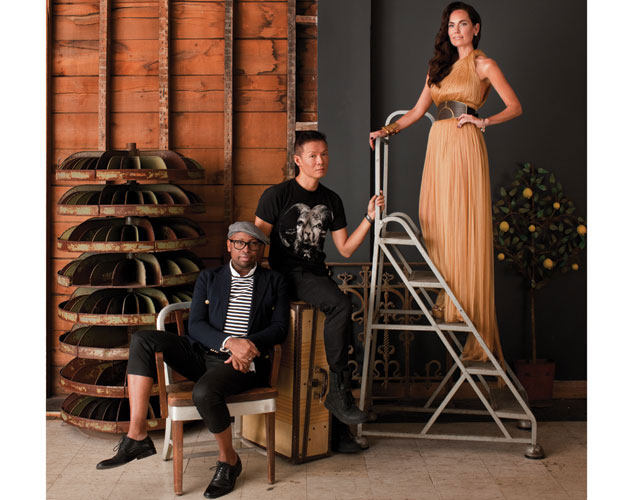 It’s every designer’s must-have – a woman who inspires.

Behind every great fashion designer stands a style-savvy woman. She is a fountain of inspiration, a confidant, a collaborator and, in some cases, a close friend. She is that ethereal creature that artists throughout history have called upon to get their creative juices flowing – the muse.

While the ancient Greeks looked toward the heavens, to the nine muses who were the goddesses of various arts such as music, poetry and dance for artistic and intellectual inspiration, modern day designers look to more earthly figures: a celebrity, a model or, simply, a woman who just happens to be one of their customers. But as ephemeral as the relationship sounds, it is often one of the most important partnerships a designer can forge in business.

Some of these relationships have gained legendary status and have had an impact that still resonates today. The most famous of these is Hubert de Givenchy and Audrey Hepburn. His little black dress she wore in the 1961 movie Breakfast at Tiffany’s still remains the pillar of style and good taste – the go-to outfit for women everywhere.

“There is not a woman alive who does not dream of looking like Audrey Hepburn,” the designer once said.

Today, the muse often takes on a collaborative role in the design process, as Sophia Coppola did with Marc Jacobs, once helping him design a handbag and shoe collection for Louis Vuitton.

“Young and sweet and innocent and beautiful. The epitome of this girl I fantasize of,” Jacobs has said of her.

At times, they so embody the work of the designer, they are also featured in the ad campaigns as the face of the brand, as the Italian actress Monica Belluci has for the past few years for Dolce & Gabbana, perfectly personifying the label’s Sicilian sexpot image.

Some of these designer-muse relationships can last a lifetime. When Yves Saint Laurent worked on the costumes for the 1967 movie Belle du Jour, he became close friends with the young French actress Catherine Deneuve, who served as one of his muses over the years. At his final show in 2002, she serenaded him on the runway, a sweet ode to their stylish friendship.

But other designers’ love-ins with a muse did not end so serenely. Sometimes, it can get downright possessive.

In the 1980s, the model Ines de la Fressange had a very close working relationship with the designer Karl Lagerfeld at Chanel, but when she accepted the honour of being the model of Marianne, a bust that is literally the symbol of France, Lagerfeld severed ties with her.

Some muses can also be fickle. Lady Amanda Harlech stood by John Galliano’s side for more than a decade, but then left him to join Lagerfeld at Chanel. Rumours suggest Chanel wooed her with bigger paycheques.

Despite the fact most of these relationships are platonic, sometimes they not only got possessive but they took on darker overtones. In the 1990s, openly gay designer Claude Montana married his muse, the model Wallis Franken. A few years later, she committed suicide by jumping out of the window of their Paris apartment.

In rare cases, it was the muse who sought out the designer. The aristocratic British stylist and bon vivant Isabella Blow discovered Alexander McQueen as a young student at Central Saint Martins College and bought his entire graduation collection. She also discovered the milliner Philip Treacy and brought him to live with her.
Sometimes, the designer did not have to look far for his muse. Gianni Versace used his sister, Donatella, as his. So close was their relationship, after his tragic death in 1997, she seamlessly took over the design duties.

There was at least one designer who didn’t have a muse but instead looked into a mirror. Coco Chanel merely designed clothes that she wanted to wear herself. And she was the greatest muse of all. Today, all of her signatures – strands of pearls, the tweedy jacket, knitwear, Breton sweaters – remain the height of chic.

It should not be surprising that she once said, “I don’t do fashion, I am fashion.”

Stacey Jordan, fashionista CANADIAN DESIGNERS Kirk Pickersgill (left) and Stephen Wong at Greta Constantine “Stacey is someone who truly loves, loves fashion and is fearless with what she wears. There is always a story behind the pieces she buys. When you go to an event, you seek her out, just to see what she’s wearing. We are intoxicated by her.” BEAUTY To get this look, try Vintage Vamp nail lacquer and Pro Longwear Lipcreme in Sweet Ever After, both by MAC.

From the pages of Zoomer magazine, November 2013 issue.