Oscars’ Winning Ladies: The 10 Best Dressed at the 2014 Academy Awards 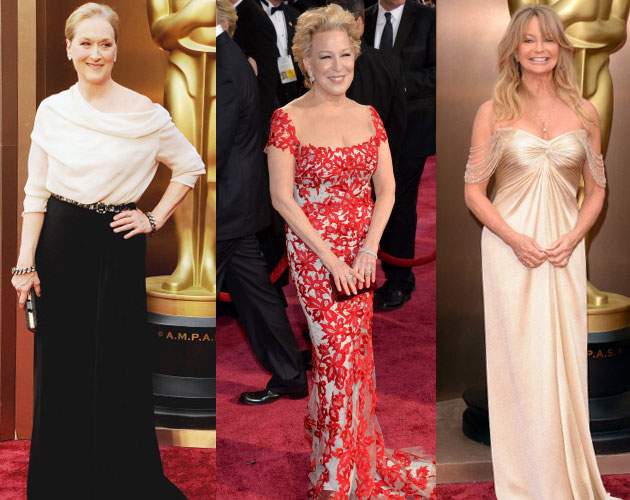 This year’s Academy Awards will be known as the night the moms almost eclipsed some of the stars on the red carpet. Academy Award winners Jared Leto (for Best Supporting Actor) and Matthew McConaughey (for Best Actor) both brought their mothers as dates to the Oscars last night. And despite their mega-watt off-springs at their sides, the ladies held their own sartorially.

But, there were other Golden Girls that ruled the night as well.

We list the winning Zoomer-rific looks that wowed us on the red carpet. 1. Liza Minnelli, 67
Despite host Ellen DeGeneres referring to her as ‘Sir’, there wasn’t anything masculine about Minnelli’s cobalt blue silky pajama look. She looked chic and comfortable–and added a touch of rebellion with a matching streak of blue in her hair. 2. Meryl Streep, 64, wearing Lanvin
This cream and black outfit might have been simple but offered classic and timeless glamour. 3. Cate Blanchett, 44, in Armani Prive
The blond beauty went with a creamy creation that looked flawless against her pale complexion. 4. Sandra Bullock, 49, in Alexander McQueen
The star channelled old world Hollywood glam with both her ball gown and her cascading waves of hair. 5. Viola Davis, 48, in Escada
Davis also opted for the retro look of Hollywood eras past with her hair in Marcel waves and ball gown. 6. Julia Roberts, 46, in Givenchy
The actress stepped up her fashion game and opted for one of the hottest labels out of Paris. The navy lace gown looked modern but perfectly suited Robert’s classic beauty. 7. Bette Midler, 68, in Reem Acra
The diva was one of the very few who wore prints or patterns on the red carpet. And the form-fitting, red, lacy gown showed off the saucy singer’s svelte shape. 8. June Squibb, 84, in Tadashi Shoji
A gown with a matching jacket seems to be a god-send for women of a certain age who wish to cover their arms for a formal occasion. And this sparkly gown and jacket combo does that beautifully without being too matronly. 9. Goldie Hawn, 68, in Versace
And then there are those that wish to flaunt arms, shoulders, bosom and all! And why not if your body is in terrific shape? The ageless blond bombshell showed off her incredible figure in a gown that was sexy without being tawdry. 10. Glenn Close, 66, in Zac Posen
Not one for making extreme fashion statements, the actress kept it simply classic in a mermaid style gown and matching shrug jacket.