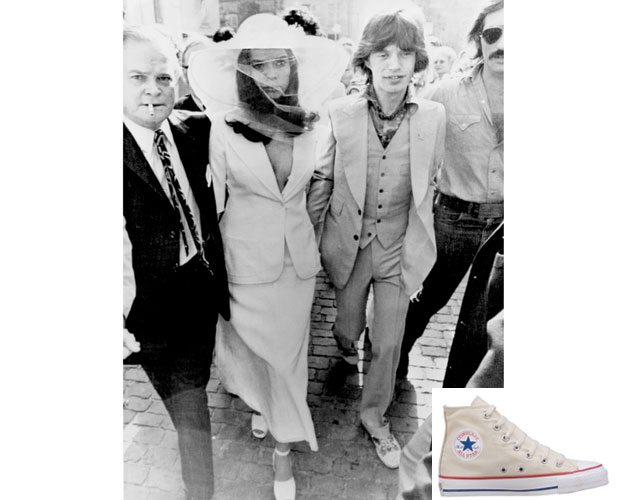 Not all fashion is fleeting. Some items transcend trends to gain iconic status

In the hyper-fast world of fashion today, trends and designer brands can practically last only a nano-second. Success and best-seller status can be fleeting in an over-crowded market. Designers, manufacturers and retailers spew forth a tremendous amount of items to seduce consumers who, in turn, seem to have an ever increasing appetite to buy more, acquire the latest and expand their wardrobes exponentially.

We live in a world where fall clothes are flagrantly hawked as early as June, and fast fashion retail chains have new merchandise every week. This rabid conspicuous consumption era has, unfortunately, paved the path for disposable fashion.

With the attention span of a gnat, we get rid of the not-so-old to make way for our new obsessions. But despite the fickle nature of fashion, there are some that have stood the test of time and the tempestuous mood swings of the fashion world.

As Valeria Manferto De Fabianis wrote in A Matter of Fashion: 20 Iconic Items That Changed the History of Style, not everything in fashion passes. “There are creations that years after their appearance on the scene have maintained their capacity to represent elegance, style and class.”

But how does a fashion item enter the pantheon of iconic status?

Good timeless design and unwavering quality, of course, are the cornerstones.  But sometimes it falls on Lady Luck by being in the right place at the right time or having the right famous person wear it, thereby anointing it.

Would the “it” bag from Hermès, known as The Kelly, be highly coveted and have its iconic status today if Grace Kelly was not photographed carrying it? Or what woman, still to this day, doesn’t want to emulate Audrey Hepburn in her classic black sheath dress in the 1961 film Breakfast at Tiffany’s? The black dress was invented many years previously and according to A Matter of Fashion, it was Coco Chanel who did it first. But the image that was seared on popular culture’s mind is Audrey Hepburn.

But sometimes a successful product can fall out of favour, like Converse sneakers, only to enjoy a renaissance with a new generation.

While there is a lengthy list of legendary fashion items, Zoomer selects five that are right on the money and worthy investments.

When the tennis champion René Lacoste first wore a short-sleeved white shirt on the courts in 1926 because of a heat wave, it was considered scandalous. Traditional tennis attire at the time included blazers. But when he retired and launched a clothing label in 1933, he realized the marketing potential of the polo shirt, which he branded the L.12.12. The famed crocodile logo came courtesy of his sports persona and marked the first time a logo was visible on clothing. Until 1950, the shirt was only available in classic tennis white. Available today in nearly 55 colours, it is now worn by athletes and non-athletes alike and remains a symbol of sporty elegance and the cool prepster. Lacoste polo, $98

Today, women still wrap their heads in Hermès scarves like Brigitte Bardot did
in 1958.

Available in a rainbow of colours and an array of whimsical prints, the square-shaped silk scarf – known as the Carré – from this historic French brand remains an emblem of elegance and Parisian chic and is worn by women of radically differently fashion senses, from corporate executives to street-style stars to Queen Elizabeth.  So beloved by women, they transcend fashion trends and are always chic, attaining heirloom status to be passed down to daughters and grand-daughters. Hermès Carré, $420, hermes.com

In keeping with her desire to change fashion, like she did with her clothing, Coco Chanel wanted a fragrance unlike any other. Instead of the heavy scents featuring a single floral note, she wanted something indefinable, hence her fragrance with no less than 80 ingredients. Further pushing boundaries, she named it after her lucky number and chose an apothecary-looking bottle. Chanel did not make it available for sale but gave it away to special clients, immediately making it a coveted commodity. Years later, in 1954, Marilyn Monroe would declare it was the only thing she wore to bed. And it became the first perfume that would become a 20th-century symbol of luxury and design when Andy Warhol immortalized the bottle in his art, and the MOMA honoured it in 1959. Even the fragrance’s much-maligned 2013 commercials featuring Brad Pitt as its face couldn’t dull its lustre. Chanel No. 5, $122, thebay.com

In 1921, Chuck Taylor was a basketball player. Though not a star like Michael Jordan or LeBron James today with sneaker endorsements, he was a fan of the Converse sneaker and went to work for them. His suggestions to make it better were so successful, his name now appears on the logo. Converse sneakers, $65, converse.com

Jeans styles come and go at a rapid rate. Those boot-cut jeans you so loved last year can easily look dated this year. But the classic Levi’s 501 from the company that invented the original blue jean for prospectors heading West for the Gold Rush remains forever cool and hip with a touch of rebellion. And while jeans were once a fashion item that defined social and cultural change in the 1950s, as young people adopted it as their uniform to change the world, and achieved designer status in the ’70s, today it remains the most egalitarian item in fashion. But if there is one pair of jeans that withstands fads and trends, it’s Levi’s 501. Levi’s 501, $84