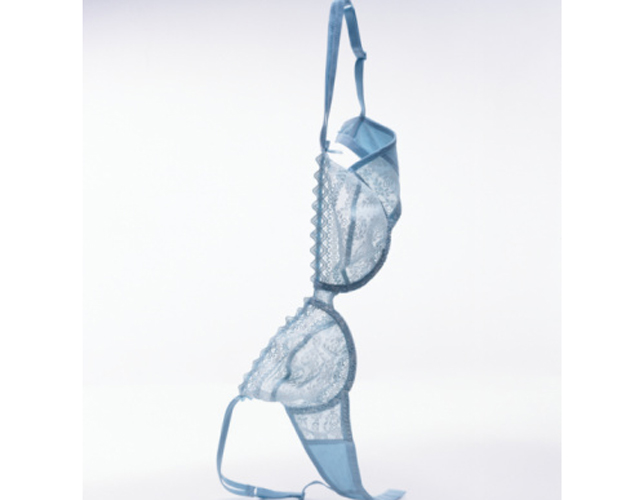 What’s the best feeling in the entire world? If taking off your bra when you get home after a long day comes to mind, then you’re most likely not wearing the right size. It’s okay you’re not alone.

The conversation about women’s breasts and their bra size continues to spark our interest because for some reason a majority of us still aren’t wearing the proper size. Whether it’s because we’ve lost/gained weight or our weight has simply shifted, our bras no longer fit. And before you shake your head at this article, we’ve spoken to an expert. Eveden Inc. national fit specialist, Frederika Zappe, has been getting women into the right-sized bras for the past 16 years. She fitted me recently and she knows her stuff.

Zappe has it down to a science.  She has four simple signs to know you’ve got the right (or wrong) fit. Maybe do a quick self-check as you read this article?

1. Make sure the centre is touching your skin.
“That centrepiece between the cups has to tack. It should ideally tack right up against the chest wall.” Why? That’s where the support comes from “The band needs to do the heavy lifting. Not the straps.” When the band is not snug, the straps start working overtime and we often end up with deep grooves in the shoulder. Zappe says, “It’s like water dripping on a rock and after a certain amount of years, there’s an indentation, and then it gets deeper and deeper and deeper.” Is your centre band touching the skin between your breasts?

3. The band should sit parallel with the floor.
Zappe says, “The band should be snug enough to stay parallel to the floor. If you find that your band is riding up and your breasts are falling down – think of it as a teeter-totter or a see-saw. If the band rides up in the back, the band falls down in the front, the chances are that the band is too big.” Is the back of your band sitting up near your shoulder blades?

4. Do the swoop and scoop.
“Let me also stress that the swoop and scoop is key. The breasts aren’t like Easter bunnies, and they are not going to hop into their little baskets where they belong, unless you put them there. You have to encourage that breast tissue forward. And make sure there’s not a scrap behind that wire. Every scrap of breast tissue needs to be in the cup.  If you do that, you will find that the bra you are wearing right now is too small in the cup because the breast tissue was behind the underwire and now it’s inside the underwire, so you’re going to add to your cup size [read, spillage].  By bringing it forward from under the arms, you might find that you’ll be going down in the band as well.” After swooping and scooping, are you finding you’re falling out of your bra?

If you’ve found yourself not getting a perfect 4 out of 4, there are a few simple fixes. Likely you need to go down in your band size (if you wear a size small, the chances of you being a 34 or 36 are slim) and you need to go up in your cup. Zappe says, “Most women are wearing their bands too big and their cups too small.” Bra sizes have really expanded over the past ten years. Eveden carries up to a J cup, which means we have a better chance to find the perfect fit.  “Up until quite recently – last 10 years – the only cup sizes that have been available are up to a triple D.  And so if that’s all that’s available, you have to go up in the band just to get your boobs into the cups. So in the big box stores, you are hard-pressed to find anything over a triple D and then people think of a triple D as something that is really enormous.  ‘Oh my god, a triple D!’ And they don’t understand that so much of it has to do with the size of the band.”

What Zappe wants to stress most of all is to embrace your breast size. “It’s not all about flattening and minimizing, and most post-menopausal women tend to get a little bit curvier, which is wonderful,” she says, adding, “The most important thing is to get that lift. What happens then is you’re creating space in the torso. What happens then is first of all, you’re going to stand differently. You’re going to breathe differently. You’re going to stand up straight. And also by bringing that breast tissue out from the under arm and up and forwarding, it’s lengthening and it’s slimming. You’re going to feel fabulous!”